The wonderful thing about Roth IRAs is that you pay taxes when you put money in and get to avoid taxes when you pull money out, which makes these accounts the perfect place to stash dividend-paying stocks. Emerson Electric (NYSE:EMR), Caterpillar Inc. (NYSE:CAT), and Southern Company (NYSE:SO) are all out-of-favor companies -- with long dividend histories and sizable yields that you should be considering for your Roth.

The number that stands out at Emerson Electric is 59; that's how many consecutive annual dividend increases the company has under its belt. Talk about a commitment to shareholders. But think about that a different way: That's nearly 60 annual pay hikes for anyone who was living off those disbursements. Put that in a Roth and it becomes tax-free income. 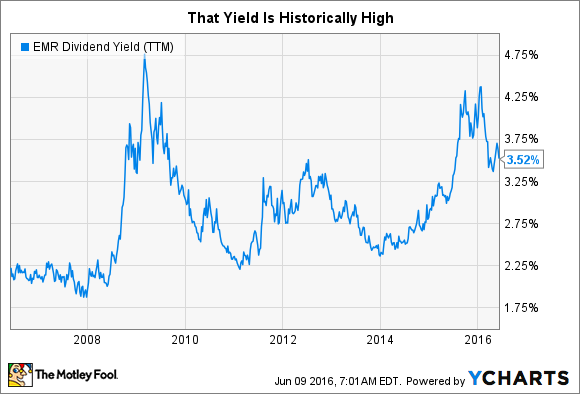 That said, Emerson is yielding 3.5% or so for a reason (that's historically high for the company). Industrial stocks are facing a tough business environment. Emerson, for example, expects organic sales to decline as much as 5% this year because of generally weak global growth and a slowdown in China. But it still expects to earn between $2.61 and $2.88 a share in fiscal 2016. That's more than enough to cover the company's $1.88 a share annual dividend, with some room for yet another increase, too. But it gets better: Trim out the costs associated with the spin-off of a lagging division, and the industrial giant's earnings would increase to between $3.05 and $3.25 a share.

Caterpillar has it pretty rough, too, right now. The mining downturn that started in 2011 has taken the wind out of the company's sails and it doesn't look like things are going to get better anytime soon. However, Caterpillar isn't sitting around -- it's been cutting costs and right-sizing its business to align it with the current market. What it hasn't done, however, is cut its dividend, which has gone up for 22 straight years.

Although the stock has rallied some this year, it still offers income investors a roughly 4.2% yield. But just how bad is it for Caterpillar right now? The company is expecting to earn around $3.00 a share this year. Pull out one-time items (basically restructuring costs), and that jumps to around $3.70. That's more than enough to cover the $3.08 per share or so in dividends the company pays. And don't forget that Caterpillar's earnings are weak right now, which suggests that there could be a big earnings upside when demand for giant machines heats up again.

The third company you might want to stick in your Roth is giant U.S. utility Southern Company (NYSE:SO). The company has increased its dividend for 16 consecutive years and sports a dividend yield around 4.5%. But you'll want to pay a little more attention to the minutia here than with Caterpillar or Emerson, where big-picture trends are more important.

Southern's yield is relatively high compared to peers because of company-specific problems (for reference, Vanguard Utility ETF yields around 3%). One of the long-running issues has been construction delays and cost overruns at the company's big clean coal and nuclear power plant projects. Although Southern has been working to get these projects back on track, they still bear watching. Another reason for the yield difference is Southern's plans to purchase natural gas-focused AGL Resources (NYSE: GAS). Some industry watchers suggest Southern is overpaying, which, of course, won't be obvious until after the deal closes and investors start to see the combined results.

That said, Southern has been around for a very long time, isn't spreading itself into areas outside its core competencies with the acquisition or its utility projects, and it operates in a regulated business that pretty much ensures it will earn a decent return. So if you are looking to generate some tax-free income from a Roth, it would be a good idea to consider this well-known utility for your portfolio.

Caterpillar, Southern, and Emerson are all companies with great histories and easily recognizable names. Their yields are relatively high because of real issues, but time has proven they are likely to survive their current troubles just as they've survived troubles before. And that's the opportunity that makes these three great stocks for your Roth IRA, since the dividends they pay -- and hopefully grow over time -- can help you replace your paycheck with tax-free Roth distributions.