Stocks turned in a mixed performance last week as the Dow Jones Industrial Average (DJINDICES:^DJI) rose slightly and the S&P 500 (SNPINDEX:^GSPC) ticked lower. Both indexes remain solidly higher on the year and within 1% of all time highs set last year. 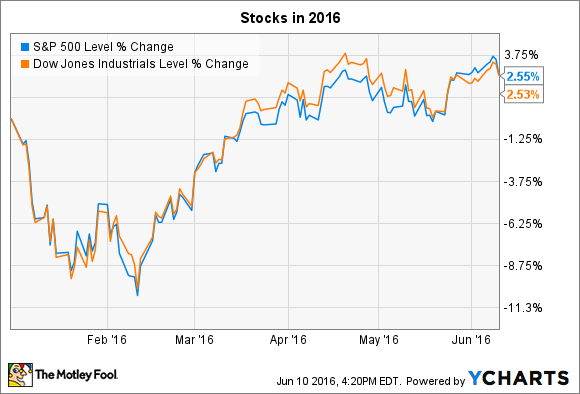 The highlight of this week's economic news will likely be an announcement by the Federal Reserve slated for 2 p.m. EDT on Wednesday. Following the central bank's monetary policy meeting, it will publish a statement indicating whether officials decided to raise interest rates. Investors can expect volatility around that announcement as Wall Street adjusts its expectations regarding the pace of future interest rate hikes.

Apple kicks off its worldwide developer's conference on Monday, beginning at 1 p.m. EDT. At this event, CEO Tim Cook is likely to unveil big updates to the Siri platform in addition to refreshed Apple Music, Apple Pay, and OS X functionality.

The tech giant's hardware announcements garner the most attention -- and there's reason to believe Apple is working on something big in that arena. However, the iPhone maker's services segment has grown into a major business in its own right.

That division posted a 20% revenue jump last quarter to $6 billion as the iPhone, iPad, and Mac divisions all declined. While not as flashy as hardware sales, services like AppleCare and Apple Pay generate a steady stream of recurring revenue from the company's one billion active devices around the world. That lessens the need for huge, innovative leaps to keep the business churning higher, making Apple look a bit more like a Warren Buffett stock.

Kroger's stock has underperformed the market so far this year thanks to an unusual sales growth slowdown: Comparable-store sales improved by 3.9% last quarter, marking the first time that metric has fallen below 4% in years. The grocer still trounced rivals on both revenue and profit gains as it closed out its tenth straight fiscal year of boosting market share and lowering costs as a percentage of revenue.

This week, investors will be looking for more progress on both of these trends. Comps aren't likely to impress, though, especially with deflation weighing down results.

Kroger may also update shareholders on the rollout of its online ordering and delivery initiatives. Meanwhile, the company's debt level has dropped back down to where it was before Kroger made its last major acquisition, Harris Teeter. Management is likely to get questions from analysts regarding when it might pull the trigger again and snap up another regional industry player.

After the market closes on Thursday, software titan Oracle will announce results for its fiscal 2016 year. Shares are on the upswing lately, rising 7% this year following solid fiscal Q3 results. Revenue fell 3% last quarter, but management trumpeted the fact that its targeted growth segments improved, as did profitability. "Our cloud business is now in a hyper-growth phase," CEO Safra Catz said in a press release.

Catz also predicted that the positive business momentum would "ignite substantial EPS and cash flow growth over Oracle's next few quarters." Wall Street seems to have a less optimistic take. Consensus estimates call for earnings to tick up by just 5% this quarter as sales decline by 2%. For the next fiscal year, profit is projected to rise to $2.81 per share from the roughly $2.62 per share Oracle manages through fiscal 2016. All of these estimates are subject to substantial revisions, though, when the company posts its results this week.