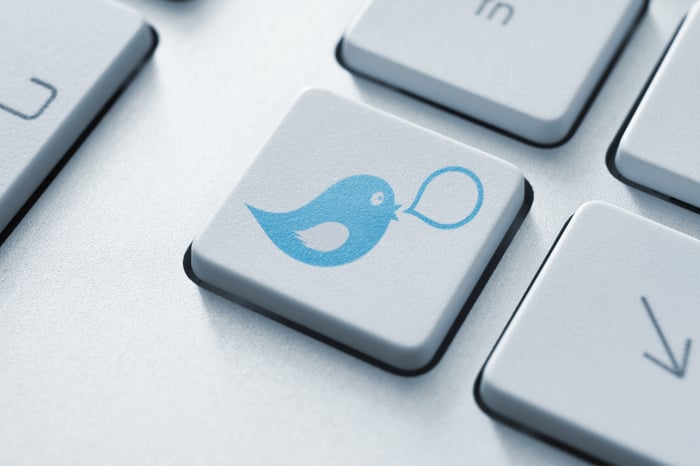 Analyst firm SunTrust Robinson Humphrey thinks Twitter (NYSE:TWTR) is likely to be on the auction block. Among other executive turnover, Jeff Seibert, Twitter's former head of core consumer product, has been reassigned at the company and SunTrust Robinson Humphrey cites ongoing executive turmoil as well as lack of growth as reasons to believe Twitter will eventually be acquired, according to a MarketWatch report.

The basis of SunTrust Robinson Humphrey's outlook seems to be continued C-suite turnover. SunTrust released an accompanying visual comparing Twitter executives who presented at 2014's Analyst Day, and those who are there today, and found that nearly 70% were no longer at the company, including an exodus of four high-level executives in late January. Since 2014's event, here's Twitter's performance versus its closest social-media competitor, Facebook: 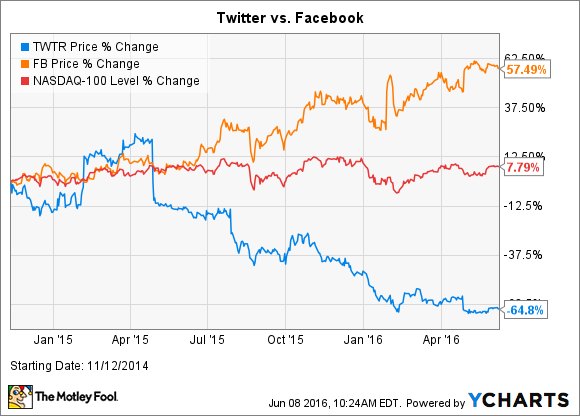 As the chart shows, Twitter's performance has been disappointing compared to Facebook and the greater Nasdaq 100.

A growing chorus of analysts arguing for Twitter to sell

SunTrust Robinson Humphrey isn't the only ratings agency that thinks a sale is the best-desired result for investors. Last month, MoffettNathanson cut Twitter stock from "neutral" to "sell," citing advertiser fatigue, and pointedly classifying the company's new strategies as "too little, too late." After assigning a price target of $12 to the company -- it currently trades around $14 -- MoffettNathanson was quoted as saying it sees "no compelling reason" to own the company other than the possibility it may be acquired.

Out of the two analyst firms, MoffettNathanson appears to have the most cohesive and comprehensive analysis. First, SunTrust Robinson Humphrey maintains a "buy" rating on the stock, with the main impetus for the rating being the predicted buyout. So-called "event investing," including buying a struggling company in hopes it will be acquired, is not for prudent investors.

Second, SunTrust Robinson Humphrey's data are incorrect: The main thesis for saying Twitter should put itself up for sale is the fact that nearly 70% of Twitter's C-suite has left the company. The analyst firm included Jeff Seibert among those who have left the company as proof Twitter is losing high-level executives at a high rate.

But Seibert has not left Twitter. He is no longer head of core consumer product, but remains with Twitter as the head of Fabric, Twitter's software development kit. Ironically, Seibert returns to the same role he had at the 2014 Analyst Day event that SunTrust Robinson Humphrey used to gauge C-suite turnover.

Twitter's problem appears to be a divergence between a great service versus a great investment. When it comes to news dissemination, there's arguably no outlet with more importance than the microblogging site.

MoffettNathanson's bearish note, where the stock was downgraded to a sell rating, was formulated after talking to major ad agencies. According to MoffettNathanson: "The commentary we continually hear is that most aren't pushing their clients to increase their budgets on Twitter or are actively steering clients away from Twitter all together."

If MoffettNathanson is correct, and ad agencies are reducing ad spend on Twitter, it could be a rough road ahead for the stock. If true, perhaps a buyout is the best path forward for the company.