Over the past year and a half, American Airlines (NASDAQ:AAL) and United Continental (NASDAQ:UAL) have produced the worst unit revenue results among major airlines. Both carriers recently confirmed their Q2 unit revenue forecasts. American projects that passenger revenue per available seat mile (PRASM) will fall 6%-8%; United expects a 6.5%-8.5% PRASM decline.

Most U.S. airlines are likely to report sequential improvements in unit revenue for the next few quarters. However, American Airlines should see a faster unit revenue recovery than most of its competitors -- especially compared to United Continental.

Similar revenue headwinds -- but not the same

However, the two legacy carriers have also faced some unique pressures. Southwest Airlines (NYSE:LUV) has grown rapidly at Dallas Love Field since late 2014, impacting fares at Dallas-Fort Worth International Airport, American's largest hub. American's leading position in Latin America has also been a curse due to economic and currency weakness in Brazil and Venezuela.

On the flip side, United Continental has been hurt by weak oil prices, which have reduced demand in Houston, one of its largest markets. United's heavy exposure to China has also been a liability as Chinese carriers have rapidly increased their capacity in the U.S. Both of those headwinds may continue for the foreseeable future.

The whole U.S. airline industry is set to benefit from slower capacity growth in the second half of 2016 relative to the first half of the year. However, American Airlines will see a particularly big improvement in competitive capacity trends over the next few months.

As noted above, Southwest Airlines embarked on a huge capacity expansion in Dallas beginning in late 2014. The last round of Southwest's growth there occurred on August 9, 2015, when it added another 16 flights, including eight new nonstop destinations. As a result, year-over-year growth in Love Field's passenger count peaked at 87% in September 2015.

Due to Southwest's growth, Love Field is now operating at maximum capacity. In April, passenger traffic there was up just 11% year over year -- and in line with last September's level. This means that as of mid-August, American Airlines will benefit from vastly more favorable capacity dynamics in its largest market.

Additionally, two pesky discounters that compete with American Airlines in numerous markets -- JetBlue Airways and Spirit Airlines -- are set to dramatically slow their growth in the second half of 2016. That, too, will help American Airlines get its unit revenue trajectory back on track.

Brazil may be bottoming

Brazil is one of American Airlines' most important foreign markets. However, Brazil's economy has fallen into a deep recession and the value of the Brazilian real plunged against the U.S. dollar between mid-2014 and early 2016. Fears about the Zika virus have also limited tourist travel to Brazil.

These issues have caused massive unit revenue declines for American Airlines' routes to Brazil. (For example, in Q1, the carrier's Brazil unit revenue plunged 39% year over year.) Whereas routes to Brazil generated about 6% of American's revenue in late 2013, that has fallen to as little as 2% recently.

However, the worst may be over. First, American's revenue in Brazil has fallen so far that it doesn't have much room to decline any further.

Second, the real has gained more than 15% against the dollar since late January, ending last week at 3.42 reals per dollar. Foreign exchange is thus likely to be a much smaller revenue headwind for American Airlines in Q3 and could even turn into a modest tailwind by the end of the year. 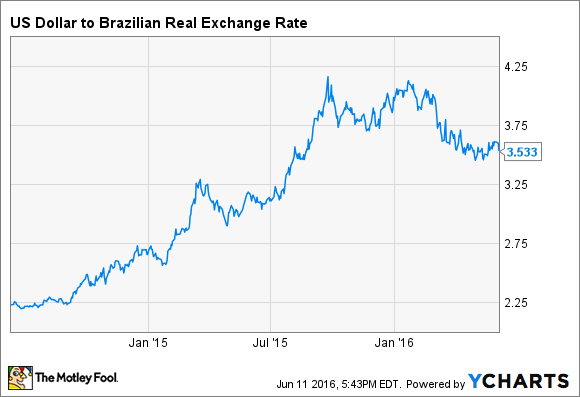 Third, the Olympics will provide a short-term boost in demand for travel to Brazil in August. Given that American will face fairly easy year-over-year comparisons, there's a good chance that unit revenue in Brazil will turn positive next quarter, which would be a dramatic turnaround from the recent status quo.

Other initiatives will help, too

In addition to more favorable conditions in the domestic market and in Brazil, American Airlines will benefit from some revenue-enhancing initiatives it is working on. It recently implemented a new demand forecasting system. The new system had some teething pains earlier this year, but going forward it should make a positive contribution to American's revenue performance.

Looking further ahead, American and United both plan to roll out a new "basic economy" fare class by the end of the year. This will help with market segmentation by allowing them to match budget carriers' fares while encouraging less price-sensitive customers to pay a little more.

Finally, American Airlines is launching a new "premium economy" section for international flights beginning in late 2016. This will help it capture incremental revenue from passengers who are willing to pay to upgrade from coach but can't afford business class tickets.

American Airlines President Scott Kirby has warned that unit revenue isn't likely to return to growth until 2017. Still, a confluence of favorable factors should allow the carrier to dramatically reduce its unit revenue declines in the last two quarters of 2016.