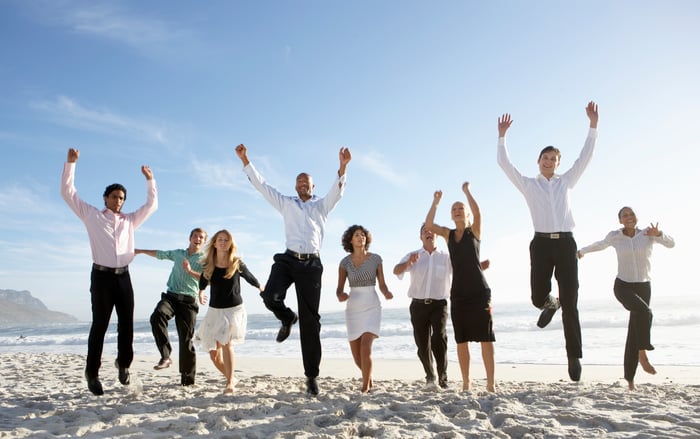 Do you love working for your company, or does your heart fill with dread every Sunday night? That's a key question for employees, but few investors ask this question of their investments. They should. While an engaged, highly motivated workforce doesn't show up on the corporate balance sheet, over time the effects are profound.

Motley Fool founder Tom Gardner and Motley Fool One's Morgan Housel address the importance of corporate culture in a LinkedIn Pulse article titled "Half Your Employees Hate Their Jobs." The piece references a Gallup survey that found 70% of respondents were either "not engaged" or "actively disengaged" at their jobs, meaning only 30% of the average company's workforce was actively engaged and motivated.

Against that backdrop, a dynamic, well-liked CEO should add value to an organization. That's where employer-ratings company Glassdoor comes in. Every year the company releases its Employees' Choice Awards, which consists of the top-rated CEOs by their workforce. For 2016, here are the CEOs of publicly traded companies with the highest employee ratings. Each CEO is rated higher than Apple's Tim Cook, who placed at No. 8 with an enviable 96% employee approval rating.

It's been a great year for Ultimate Software Group (NASDAQ:ULTI). The cloud-based human-resources company has seen its stock jump 27% over the prior year versus the greater Nasdaq's loss of 2%. Last fiscal year, the company grew total revenue 21%, with high-margin recurring revenue increasing at a faster clip than lower-margin services. While earnings per share decreased during this period, it was as a result of increased investment that should pay (figurative) dividends in the years to come.

Employees seem to be on board with Scott Scherr's plans, with a sky-high approval rating of 99%. Scherr trails only Bain and Company's Bob Bechek this year, rising three spots from No. 5 in 2015 to No. 2 in this year's 2016 survey.

No. 4: Facebook's Mark Zuckerberg
It's been a mixed year for Facebook (NASDAQ:FB) CEO Mark Zuckerberg in the public space. Over the past year, Zuckerberg has faced criticism for his choice of charitable organizations, Facebook's free-Internet initiative in India, and recently allegations that his company was actively suppressing conservative viewpoints in its trending-articles feature.

What's been less criticized is his leadership of Facebook. The company's stock is up 44% over the past year and has added 214 million monthly active users over the past four quarters, a larger figure than the entire population of Brazil, the fifth largest country in the world. Employees rate Zuckerberg at No. 4 with a 97% approval rating, tying last year's finish but down from his No. 1 rating in 2013.

No. 5: LinkedIn's Jeff Weiner
LinkedIn's (NYSE:LNKD.DL) Jeff Weiner will soon exit this list of publicly traded companies. It was recently announced Microsoft would acquire the professional social network for $26.2 billion, nearly 50% above its pre-announcement valuation. Employees should not worry, however, as Weiner will remain the head of LinkedIn's business. Microsoft's CEO Satya Nadella was downright complimentary of Weiner in a joint interview announcing the acquisition, pointing to a productive relationship going forward.

It makes sense for Nadella to keep Weiner at the helm as he has a 97% approval rating from his employees and is No. 5 on Glassdoor's list, up seven spots from 2015's 12th-place finish. It should be noted LinkedIn's chief is down from his 2014 gold-medal finish. It's unlikely Weiner will be on this list next year, but Microsoft investors will benefit from his leadership going forward.

No. 6: Salesforce.com's Marc Benioff
If there's a theme in Glassdoor's results, it has to be the presence of software and social-media companies. Sixth place is no different, with Marc Benioff -- of customer relationship management software-as-a-service provider Salesforce.com's (NYSE:CRM) -- taking the position, with 97% employee approval.

On a one-year basis, shares of Salesforce.com are up 13% as top-line beats during the fourth quarter and first quarter helped reverse sluggish results. Salesforce.com has continued to increase its revenue guidance and sign lucrative, long-term service contracts. Benioff is the largest gainer in this list, jumping from No. 21 last year.

No. 7: Google's Sundar Pichai
Technically, Sunder Pichai isn't the CEO of a publicly traded company. As a result of restructuring, Google became a subsidiary of Alphabet (NASDAQ:GOOG) (NASDAQ:GOOGL) in 2015 and retitled Pichai's position from product chief to Google's CEO; founder Larry Page is the CEO of parent company Alphabet. During Alphabet's fiscal 2015, its Google segment was responsible for 99.4% of total revenue, so it stands to reason that Pichai is a large part of the organization's success.

Although this is Pichai's first year on the list, that's on account of the aforementioned reorganization rather than a growth of employee engagement. Pre-Alphabet Google and its CEO, Page, were a mainstay in both Glassdoor's Best Places to Work list and Employee Choice Survey, and Pichai's 96% rating is a continuation of employee enthusiasm for working at the organization.

In the LinkedIn article, Gardner and Housel note "The most strategic act that any organization can take is to better engage and inspire team members." According to Glassdoor, these CEOs are among the best at motivating their employees and organizations. As an investor, then, it makes sense to pay close attention to these leaders and their companies they preside over.