The next largest portion of that revenue base came from the combination of high-performance computing, workstations, networking, and storage. The smallest piece back then was from cloud computing. 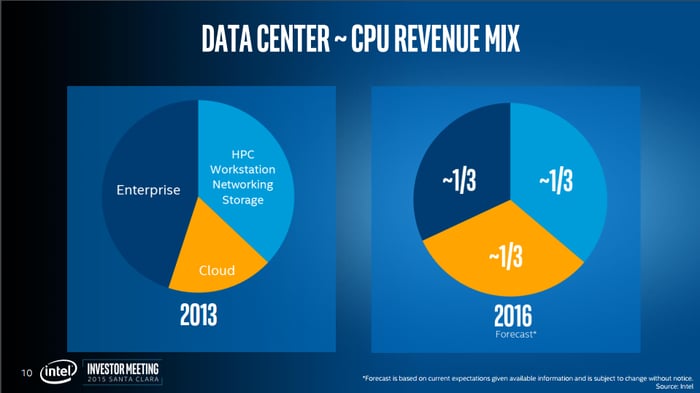 In 2016, though, these three segments are expected to each make up about a third of the company's overall data-center revenue. This was generally viewed as positive as cloud computing sales are growing the fastest, while enterprise server sales have been slow for quite some time.

Although Intel's Data Center Group has successfully diversified its revenue base, significantly lessening its dependence on a segment that's had something of a growth problem, the financial performance of the enterprise server sub-segment of the business is still going to be important.

At a recent investor conference hosted by Bernstein, Intel CEO Brian Krzanich offered some insight into what he expects from the company's enterprise server chip business going forward.

Krzanich began by saying that enterprise server sales tend to be "fairly well correlated" to gross domestic product. He then went on to say that some of the enterprise server weakness that the company has experienced in recent years is attributable to a slowdown in GDP.

As far as the general tends go, irrespective of the macroeconomic environment, Krzanich still believes that public cloud server chip sales will substantially outgrow sales for traditional enterprise servers, or "private cloud," as he refers to it.

Intel has clearly benefited significantly from cloud growth, and the revenue trend in the company's data-center business shows that the explosion of cloud computing -- even if it has cannibalized traditional enterprise server sales to some degree -- has been a net win for the company.

Krzanich did indicate that chips sold into public cloud servers tend to carry lower average selling prices than chips sold into traditional enterprise servers. He also said, though, that Intel has baked this trend into the company's financial forecasts.

All told, if Intel can continue to grow sales into public cloud servers at a 20%-plus clip, and as long as it can eke some modest growth out of traditional enterprise server chip sales, then the company's data-center business should continue to be in solid shape.