Please ensure Javascript is enabled for purposes of website accessibility
Log In Help Join The Motley Fool
Free Article Join Over 1 Million Premium Members And Get More In-Depth Stock Guidance and Research
By Daniel B. Kline - Updated Aug 22, 2018 at 12:46PM

Both companies have handed out raises, but it's below what some are calling for.

While worker protests all over the country have called for a $15 hourly minimum wage and Democratic presidential runner-up Bernie Sanders made the idea a key part of his populist campaign, that number remains a far-off fantasy for most non-manager retail employees.

Of course, there are some municipalities, like Seattle, Washington, that are slowly phasing in a $15 minimum hourly rate and others that are considering it, but the federal minimum wage still sits at $7.25 an hour, exactly where it has been since 2009. Many states have mandated minimums above that number, but 23 states still come in exactly at the lowest rate allowed by federal law, according to RaiseTheMinimumWage.com. Even the states with the highest minimum, Massachusetts and California, only come in at $10 an hour, while the District of Columbia leads the way at $11.50.

Retail sales workers generally do a little bit better than the lowest legally allowed hourly wage, but not by much. The median salary for retail sales workers in 2015 was $22,040 per year or
$10.60 per hour, according to the Bureau of Labor Statistics. That means that half of those workers earned more than that amount and half earned less, but even the ones on the better end of that scale were unlikely to get anywhere near $15 an hour.

Because of their sheer size, Wal-Mart (WMT 0.29%) and, to a lesser extent Target (TGT 0.53%), are often targeted by wage protesters. Both companies have recently raised wages for their retail workforce, but neither one comes anywhere close to paying its non-manager workforce close to $15 hourly. 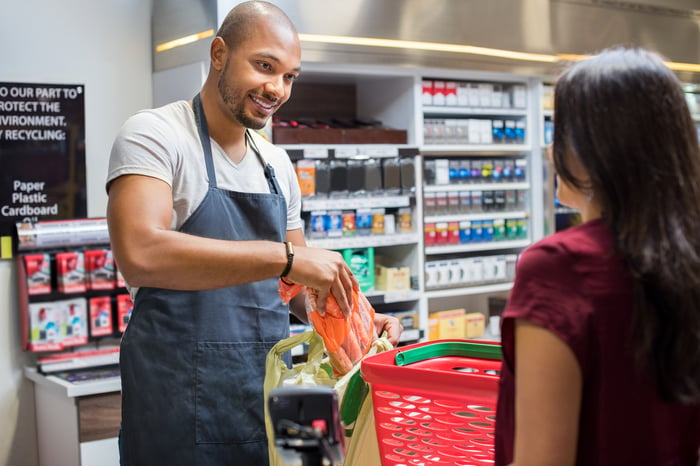 What does Wal-Mart pay per hour?

Early in 2016 Wal-Mart raised wages for 1.2 million employees as part of the second phase of what the company described as a two-year, $2.7 billion investment in workers. The raises, which went into effect Feb. 20 raised the minimum hourly rate for all associates (Wal-Mart's term for employee) hired before Jan. 1, 2016, to at least $10 an hour. New entry-level employees will continue to start at $9 an hour and move to at least $10 after successfully completing the company's new retail skills and training program, called Pathways.

In addition employees who already made more than $10 an hour received their annual raise in February rather than having to wait until their anniversary date. All non-entry level jobs will also now start at at least $10 an hour. The company reported that once these changes went into effect, its average full-time hourly wage will be $13.38, though that number includes non-salaried supervisors and managers. Its average part-time hourly wage will be $10.58.

Wal-Mart patted itself on the back in the press release announcing the change, but U.S. COO Judith McKenna also pointed out that paying people more leads to better customer service.

"We are committed to investing in our associates and to continuing to simplify our business. When we do so, there is no limit to what our associates can accomplish," she said.,"Our customers and associates are noticing a difference. We're seeing strong increases in both customer experience and associate engagement scores. "

How much does Target pay per hour?

It took Target a few months to catch up, but in April it reportedly raised its minimum hourly wage to $10, with the change going into effect in May, Reuters reported. The retailer also raised pay rates for employees who already earned more than $10 a hour. Those employees will receive an annual "merit raise and a pay-grade hike, which is related to experience and position of the employee," sources told the news service.

Unlike Wal-Mart, which heavily publicized its wage increases, Target would not confirm the change to Reuters, but did share the following statement: "We pay market competitive rates and regularly benchmark the marketplace to ensure that our compensation and benefits packages will help us to both recruit and retain great talent."

What does this mean for Wal-Mart and Target?

In the short term, these changes at least take some of the pressure off the two retailers, but moving up to $10 an hour is not likely to quiet the political and protest forces pushing for $15 an hour. The problem for Target and Wal-Mart is that making that increase would come with a huge price tag.

A recent  study by the UC Berkeley Center for Labor Research showed that Wal-Mart would have to spend an additional $4.95 billion annually  if it were to raise the minimum wage for its hourly employees in the U.S. to $15 an hour. The company has 1.1 million hourly workers in the country and the study estimated that 979,000 employees would get a raise if Wal-Mart adopted the $15 standard.

Even though Wal-Mart could afford the raises -- it made about $15 billion last year -- it's obviously a significant chunk of earnings. Because of that, and the impact that type of hit to profits would likely bring to share prices, it's unlikely Wal-Mart or Target will voluntarily go to $15 an hour any time soon.

What's much more likely to happen is slow, steady increases brought on partly by public pressure and partly by a tightening labor force. That's not what the protest movements or Sanders' followers want, but it's much more realistic than expecting either company to take on such a massive expense quickly.

Daniel Kline has no position in any stocks mentioned. His first job paid $5.50 an hour. The Motley Fool has no position in any of the stocks mentioned. Try any of our Foolish newsletter services free for 30 days. We Fools may not all hold the same opinions, but we all believe that considering a diverse range of insights makes us better investors. The Motley Fool has a disclosure policy.