As one of the nation's leading homebuilders, Lennar's (NYSE:LEN) fate is closely tied to the overall health of the U.S. housing market. That's been a boon for shareholders in recent years, as historically low interest rates, declining unemployment, and tight inventory levels have led to a slow but steady recovery in the homebuilding industry. 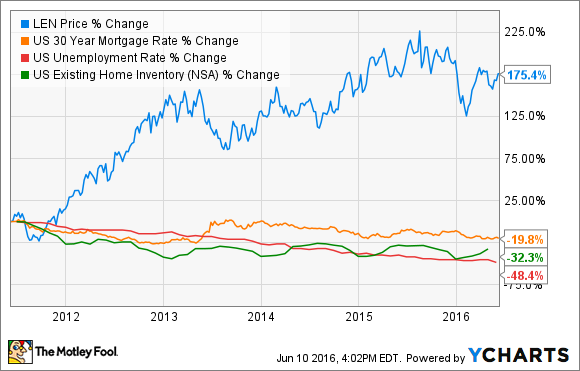 Yet the coming years may not be so kind to homebuilders, as several powerful trends could weigh on the U.S. housing market in the decade ahead. Here are three of the most worrisome.

The declining allure of homeownership

Homeownership has declined significantly since the apex of the housing bubble, from 69.1% in the first quarter of 2005 to 63.5% in the first quarter of 2016, according to the Department of Commerce. That figure represents a near five-decade low, reports The Wall Street Journal. Moreover, the homeownership rate for households headed by someone under 35 years old fell to 34%, the lowest level since at least 1994.

What's driving the decline? There are likely a host of factors involved, but one that's often overlooked is changing societal norms. For instance, as the possibility of spending 30 years at one company and retiring with a pension becomes more unrealistic and unlikely within an increasingly freelance economy, the desire to "put down roots" is giving way to an appreciation for the benefits of mobility among many Americans.

Additionally, influencers like James Altucher and Ramit Sethi have begun to challenge the conventional wisdom that a home is always a great investment, echoing the sentiment of an increasing number of young Americans who are choosing to rent longer or delay purchasing a home altogether.

And for those who do wish to purchase a home, many are finding it increasingly difficult to do so, which leads us to...

Stagnant incomes and stricter lending standards since the financial crisis have made it more difficult for many Americans to qualify for a mortgage or to save the necessary down payment.

In addition, massive student loan burdens present an often insurmountable challenge for young college graduates, who either cannot or choose not to incur any more debt.

Along with rising home prices, these trends are making purchasing a home less affordable for many Americans. Real estate marketplace Trulia recently reported that, on a nationwide basis, homebuyers will need to spend 5.6% more of their income to purchase a starter home than they needed just five years ago -- and as much as an additional 29% of their income in high-priced areas such as parts of California.

More worrisome is that these trends have occurred in what's been a largely recovering economy since the Great Recession and housing crisis. Should the U.S. enter another recession -- which is more a question of when, not if -- things could get decidedly worse.

As the economy goes, so goes housing

Housing sales depend on job gains and consumer confidence. Yet both of these measures have fallen in recent weeks. In fact, U.S. employers in May created the lowest number of jobs -- only 38,000 -- in almost six years.

Some economists have pointed to these figures as a strong signal that the U.S. could be about to enter another recession. Should these forecasts prove correct, many of the positive trends that have supported the housing market in recent years -- such as declining unemployment, wage growth, and new household formations -- could begin to reverse. In turn, that could add some near-term headwinds to Lennar's business -- as well as that of other U.S. homebuilders -- in addition to the longer-term threats mentioned above.