Looking at the price chart of Dover Corp. (NYSE:DOV), you might think the company is having a pretty good year operationally in 2016. You would, however, be wrong. In fact, management took a knife to its full-year 2016 revenue and earnings guidance in the first quarter. No matter, the stock continued its gentle climb.

What's going on, and can the rally continue? 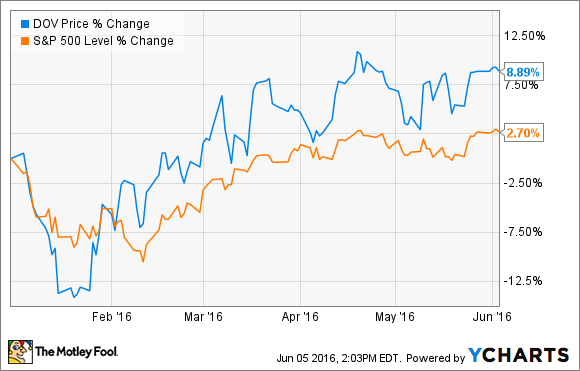 The key to answering this question lies in understanding the drivers of Dover's stock price. In short, they can be divided into oil- and non-oil-related earnings. Of course, Dover is not alone in this respect: Caterpillar Inc. (NYSE:CAT) and General Electric (NYSE:GE) also have significant oil exposure, and the message from all three is one of weakening oil and gas capital spending in 2016 -- in fact Dover has had to cut guidance as a consequence of weak energy markets.

General Electric maintained its full-year guidance, but only because aviation, healthcare, and power results are performing better than expected, helping to offset weaker than expected results from its oil and gas segment. Caterpillar was forced to trim its full-year sales guidance from a range of $40 billion to $44 billion to a range of $40 billion to $42 billion, citing weakness in well servicing, and even construction was impacted by declines in oil and gas activity, which increased the availability of construction machinery.

Dover's results and guidance were no different, with CEO Robert Livingston citing "significant further reductions in activity and capital spending within our US oil & gas related end-markets. These conditions primarily impacted our Energy results, and to a lesser extent our Fluids results."

A quick reminder of how Dover generates its earnings. 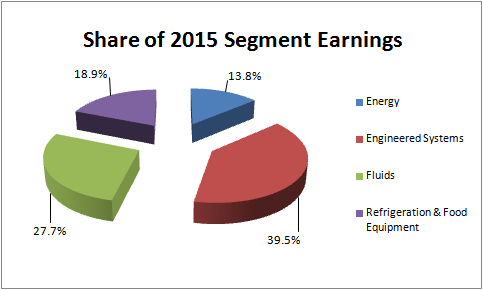 Ultimately, full year 2016 guidance was significantly reduced due to the weakness in oil and gas. The following table compares full-year guidance in the fourth quarter to that given in the first quarter:

All of which spells bad news for Dover's stock price. Or does it?

Why Dover has outperformed

The market seems to have ignored Dover's current problems and taken the view that:

As you can see below, despite the facts that US rig count keeps falling (the key driver of Dover's energy earnings) and that Dover has cut estimates (as seen above), the stock has risen as oil prices have recovered. The market isn't crazy; at some point if oil prices keep rising energy companies will start spending again. It just hasn't happened yet. 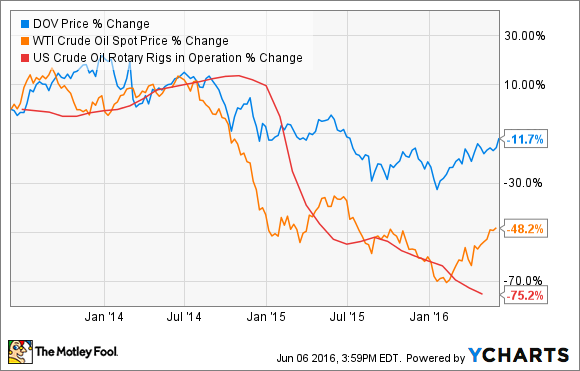 Regarding the non-oil industrial segments, Livingston reaffirmed the company's expectations for organic growth in engineered systems, and claimed refrigeration and food equipment "plans for organic revenue growth and margin improvement remain on track" In other words, the non-oil businesses are stable.

No one likes buying a stock that has just cut earnings, but clearly the key variable here is oil prices -- they appear to be moving in the company's favor, so earnings could receive a boost in the future. Turning to valuation matters, management still expects to convert 11% of revenue into Free Cash Flow (FCF) in 2016 -- based on analyst revenue estimates, this would mean around $750 million of FCF.

Based on current enterprise value (market cap plus net debt), or EV, this would put its forward EV/FCF multiple at around 17.5 times. 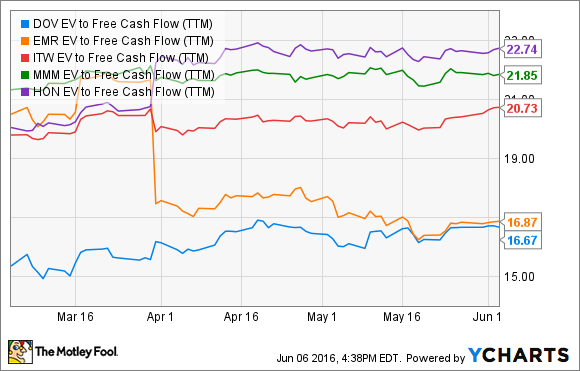 That's not bad compared to its peers, and if you think this is the trough year for oil prices, Dover looks like a very good value -- earnings could grow strongly in future years. The same could be said for Caterpillar, only that the latter has more upside exposure to higher oil prices.

Even for those skeptical about oil prices Dover looks like a good value, it just lacks in some of the long-term earnings trends that, say, General Electric has. All told, despite reducing its earnings guidance, Dover remains an attractive stock, with upside potential should the price of oil continue its recovery -- one that's well worth an addition to a portfolio on a risk/reward basis.