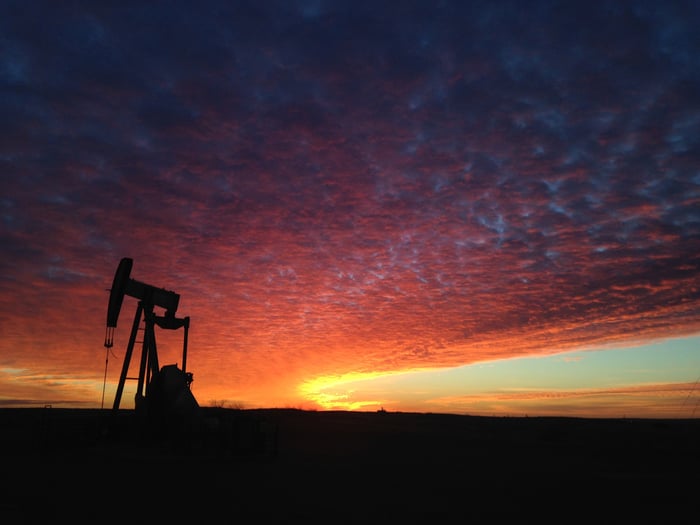 When oil prices tumbled earlier this year, Apache (NASDAQ:APA), like most of its peers, cut deeply into its capital expenditures budget. In doing so the company put itself in the position to be able to live within its expected cash flow, even if that meant that its production would decline. However, with oil now much higher than the company's initial assumptions, it's increasingly likely that Apache will boost its investments and drill more wells.

The assumptions are changing

Apache's plan for 2016 was to be able to stay cash flow neutral for the full year, assuming a $35 oil price. In order to achieve that goal, the company needed to cut capex spending by 60% over last year's rate, which yielded an initial budget of $1.4 billion to $1.8 billion. At that investment rate the company wasn't expected to be able to maintain its production, especially with only 35% of that capital devoted to development drilling. As a result, the company projected that its production would decline by 7% to 11% from last year's average rate.

A lot has changed since the company announced that plan. First of all, it only ended up investing $466 million in capital last quarter, which was below its guidance of $500 million to $550 million. However, in spite of that lower spending rate Apache's production was above its guidance range, thanks to strong production results in North America. Because of those strong results, Apache raised its full-year production guidance.

Further, oil has surged in recent weeks, reaching more than $50 a barrel before a recent slide. While that rebound is partially due to some unplanned supply outages in Canada and Nigeria, crude's rise is also being driven by the continued expectation that production in North America will decline by a meaningful amount this year. That's fueling the belief that oil could have further to rally. In fact, Harold Hamm, the ever-bullish CEO of Continental Resources (NYSE:CLR), believes crude could hit $70 a barrel by the end of this year.

Raising the standard of living

Given that oil prices are now much higher than Apache expected, and could have further to run, the company can generate a lot more cash flow than initially anticipated. That excess cash flow provides it with options, including increasing its capex budget. Increasing the budget is something CEO John Christmann said that Apache was prepared to do, but he did note on the company's first-quarter conference call that it will refrain from doing so "until we are confident cash flows have sustainably improved relative to our 2016 plan." Further, Christmann noted that the "potential timing and magnitude of this increase [in capex] is the topic of significant planning and discussion right now at Apache and with our board." In other words, it's not yet ready to boost its spending to match its increased cash flow, but it is seriously looking into the matter.

That wait-and-see approach is being taken by a number of oil companies in light of the recent rally in crude prices. In fact, despite its bullishness on oil prices, Continental Resources isn't yet ready to put rigs back to work. While the company has started to put fracking crews back to completing wells in the Bakken shale that it left unfinished after prices crashed, Continental Resources won't accelerate drilling until oil tops $60 a barrel. It's quite possible Apache will also wait until oil improves to $60 or more before it accelerates its own drilling, so that it can be sure that this time higher oil prices are here to stay.

Despite crude oil's rapid rebound to $50 a barrel, it doesn't seem likely that Apache will hit the accelerator on its drilling activities just yet. Instead, the company, like its peers, is taking a cautious approach given what has happened to the oil market the past couple of years. When Apache is confident that higher oil prices are here to stay, it will ramp up its production to capture this upside.

Is Apache Corporation About to Hit the Accelerator? @themotleyfool #stocks $APA $CLR Next Article
Current