Over the past year and a half, Macy's (NYSE:M) financial performance has been sobering, to say the least. Like fellow department store companies Kohl's (NYSE:KSS) and Dillard's (NYSE:DDS), Macy's has reported a double-digit drop in earnings per share since the beginning of 2015. Macy's revenue has declined by more than 5% in that time span, which was worse than either Kohl's or Dillard's. 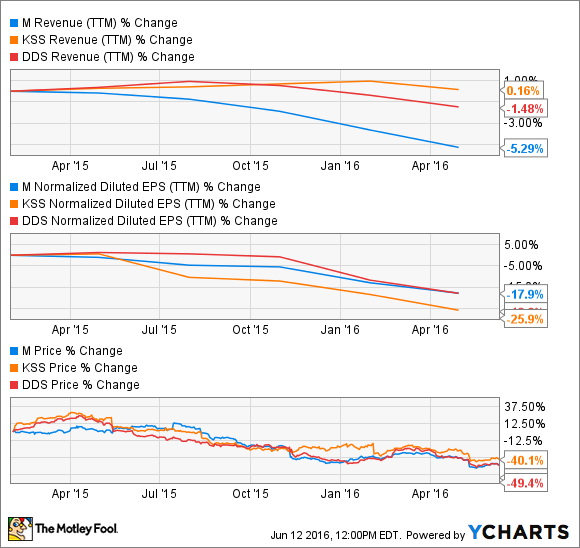 Due to this rapid reversal in EPS, shares of all three companies have plummeted by 40% to 50% since the beginning of 2015. However, in the case of Macy's, this huge stock decline looks like an overreaction. That's because Macy's owns a large portfolio of real estate, which now accounts for the vast majority of its value.

A retail turnaround could be tough to execute

Not surprisingly, executives at Macy's, Kohl's, and Dillard's are promising to get earnings back on track in the next couple of years. Despite its falling margins, Macy's has repeatedly affirmed that it will eventually return to its target EBITDA (earnings before interest, taxes, depreciation, and amortization) margin of 14%.

Unfortunately, it's not clear that retailers will ever be able to sustain the margins they earned in the past. Amazon.com is making a big push into the fashion market, with considerable success. This development will pressure department stores' profitability for the foreseeable future.

That's not to say that department stores with solid franchises like Macy's, Kohl's, and Dillard's are doomed. Nevertheless, given Jeff Bezos' "your margin is my opportunity" philosophy, they will probably need to accept lower margins to avoid massive market-share losses.

There's more to the story than retail

Thus, just based on Macy's recent financial results and the future prospects for its retail business, the company's stock price decline seems well deserved. However, analysts who examine only Macy's current sales and profitability trends are overlooking the company's key source of value: its real estate.

Real estate valuation is a somewhat subjective process. The value of Macy's mall-based stores in particular could be impacted by the ongoing shift of retail sales to the Internet. Still, about 35% of the estimated real estate value comes from stores in A, A+, and A++ rated malls -- the top-performing malls in the country.

Moreover, another 35% of the estimated real estate value comes from eight "downtown" stores, mainly in major cities like New York, Chicago, Minneapolis, and San Francisco. Much of this real estate could be more valuable if it is repurposed for office or residential use. That means a retail downturn wouldn't hurt its value.

Macy's Manhattan flagship store could be worth $4 billion. Image source: The Motley Fool.

Other department stores like Kohl's and Dillard's have much less valuable real estate than Macy's. That means they must revitalize their underlying retail businesses to create value for their shareholders.

Of course, Macy's valuable real estate might not be worth much to shareholders if the company's management were adamantly opposed to monetizing it.

Yet that's not the case. Macy's has shown in the past year or so that it is determined to extract value from its real estate -- it's just going to take time, due to the complexity of most real estate deals.

In April, Macy's hired real estate industry veteran Douglas Sesler to fill a new role as its executive VP for real estate. Furthermore, Macy's has announced a handful of real estate deals in the past couple of years. It closed stores in Cupertino, California, and Pittsburgh and sold them to third parties. Meanwhile, it sold the underutilized upper floors of two downtown stores in Brooklyn and Seattle.

Just last week, Macy's sold a downtown location in Spokane, Washington, just a few months after closing that store. This was a relatively small transaction -- the Spokane building's assessed value is $6.8 million -- which may have helped Macy's close the sale quickly. Still, it provides another example of Macy's increased focus on monetizing its real estate.

Value will shine through soon

Thus far, Macy's shareholders haven't really benefited from the company's real estate initiatives. Macy's stock remains near a multiyear low. But it has only been seven months since Macy's announced plans to explore real estate monetization strategies. From the beginning, Macy's management has suggested that it would take a year or two to nail down any major real estate transactions.

As Macy's announces larger real estate sales or joint ventures -- something that will hopefully begin in the next six to 12 months -- investors may finally look beyond the company's subpar sales and earnings results and recognize the value of its real estate. That should help Macy's stock get back on track.