Please ensure Javascript is enabled for purposes of website accessibility
Log In Help Join The Motley Fool
Free Article Join Over 1 Million Premium Members And Get More In-Depth Stock Guidance and Research
By Morgan Housel – Jun 14, 2016 at 10:16AM

Wisdom from a detective. 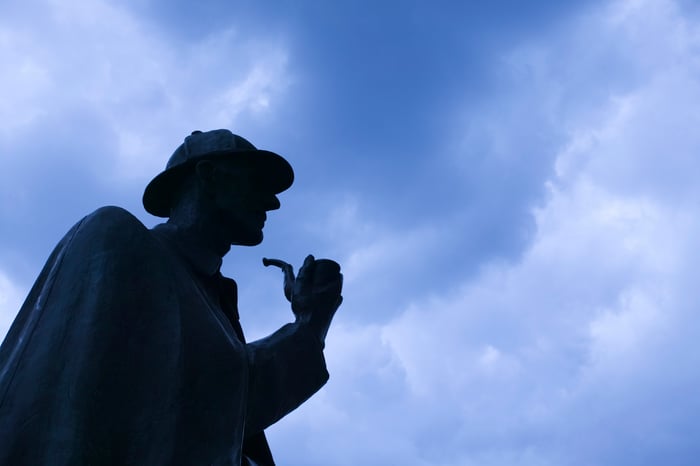 "All knowledge comes useful to the detective," said Sherlock Holmes.

The fictional detective understood that no person has a monopoly on wisdom. The closest you get to the truth is by weaving together as much relevant information from the widest web of various topics and fields as you can.

Investing isn't the study of finance. That's only part of it. Investing is really the study of human behavior, which incorporates everything from psychology, to sociology, to statistics, to history and math. There is so much to learn about investing from fields and people who, at first glance, have nothing to do with investing.

Holmes novels are filled with quotes and anecdotes that are directly relevant to investing and economics.

On confirmation bias: "The fatal mistake which the ordinary policeman make is this: He gets his theory first, and then makes the facts fit it, instead of getting his facts first and making all his little observations and deductions until he is driven irresistibly by them into an elucidation in a direction he may never have originally contemplated."

On theory versus fact: "It is a capital mistake to theorize before one has data. Insensibly one begins to twist facts to suit theories, instead of theories to suit facts."

On simple ideas being so obvious no one takes them seriously: "The world is full of obvious things which nobody by any chance ever observes."

On the tendency to overcomplicate: "Perhaps, when a man has special knowledge and special powers like my own, it rather encourages him to seek a complex explanation when a simpler one is at hand."

On pundits: "It may be that you are not yourself luminous, but that you are a conductor of light. Some people without possessing genius have a remarkable power of stimulating it."

On having an open mind: "We approached the case with an absolutely blank mind, which is always an advantage. We had formed no theories. We were there simply to observe and to draw inferences from our observations."

On doing nothing when nothing needs to be done: "You have a grand gift for silence, Watson. It makes you quite invaluable as a companion."

On debates: "If falsehood, like truth, had only one face, we would be in better shape. For we would take as certain the opposite of what the liar said. But the reverse of truth has a hundred thousand shapes and a limitless field."

On the most powerful theories being the most boring: "'It's quite exciting,' said Holmes, with a yawn."

On calm analysis rather than quick judgements: "Having gathered these facts, Watson, I smoked several pipes over them, trying to separate those which were crucial from others which were merely incidental."

On respecting the role of luck: "Ah, that is good luck. I could only say what was the balance of probability. I did not at all expect to be so accurate."

On even temperament: "Observe that rule laid down by Chilo, 'Nothing to excess, Not to believe too rashly, Not to disbelieve too easily.'"

On forecasts: "When Dr. Mortimer had finished reading he pushed his spectacles up on his forehead and stared across at Mr. Sherlock Holmes. The latter yawned and tossed the end of his cigarette into the fire.
"Well?" said he.
"Do you not find it interesting?"
"To a collector of fairy-tales."

On quickly drawing false conclusions: "There is nothing more deceptive than an obvious fact."

On complexity: "It seems, from what I gather, to be one of those simple cases which are so extremely difficult."

"That sounds a little paradoxical."

"But it is profoundly true. The more featureless and commonplace a crime is, the more difficult it is to bring it home."

On due diligence: "You're like a surgeon who wants every symptom before he can give his diagnosis?"

"Exactly. That expresses it."

On performance vs. marketing: "What you do in this world is a matter of no consequence. The question is what can you make people believe you have done."

On overloading with useless information: "I consider that a man's brain originally is like a little empty attic, and you have to stock it with such furniture as you choose. A fool takes in all the lumber of every sort that he comes across, so that the knowledge which might be useful to him gets crowded out, or at best is jumbled up with a lot of other things so that he has a difficulty in laying his hands upon it."

On con men: "My horror at his crimes was lost in my admiration at his skill."

On prioritizing: "It has long been an axiom of mine that the little things are infinitely the most important."

On seeking advice from outside council: "Nothing clears up a case so much as stating it to another person."

On respecting opposing views: "You'll get results, Inspector, by always putting yourself in the other fellow's place, and thinking what you would do yourself. It takes some imagination, but it pays."

On being suspect of promises and invariability: "We must look for consistency. Where there is a want of it we must suspect deception."

On information vs. emotion: "'Data! Data! Data!' he cried impatiently. 'I can't make bricks without clay.'"

On analysis: "The first thing was to look at the facts and separate what was certain from what was conjecture."

On the deception of well-dressed, smooth-talking salesmen: "It is of the first importance not to allow your judgment to be biased by personal qualities. The emotional qualities are antagonistic to clear reasoning. I assure you that the most winning woman I ever knew was hanged for poisoning three little children for their insurance-money, and the most repellant man of my acquaintance is a philanthropist who has spent nearly a quarter of a million upon the London poor."

On alternative explanations: "I ought to know by this time that when a fact appears to be opposed to a long train of deductions it invariably proves to be capable of bearing some other interpretation."

One being open to new ideas: "You have a theory?"

"Yes, a provisional one. One forms provisional theories and waits for time or fuller knowledge to explore them."

On little things compounding: "It is just these very simple things which are extremely liable to be overlooked.

On information and opinion: "An investigator needs facts, and not legends or rumors."

On trying to prove yourself wrong: "One should always look for a possible alternative and provide against it. It is the first rule of criminal investigation."

On the emotions of investing: "I am afraid Joseph's character is a rather deeper and more dangerous one than one might judge from his appearance. From what I have heard from him this morning, I gather that he has lost heavily in dabbling with stocks, and that he is ready to do anything on earth to better his fortunes."

On luck: "Simply by having the good fortune to get the right clue from the beginning."

On planning: "You never learn that the gravest issues may depend upon the smallest things."