Bristol-Myers Squibb (NYSE: BMY) and Merck's (NYSE:MRK)game-changing(NYSE:MRK)immuno-oncology drugs, Opdivo and Keytruda, respectively, have triggered an avalanche of research into so-called "checkpoint inhibitors" due to their stunning commercial success. For example, AstraZeneca, Pfizer (NYSE:PFE), and Roche have all made significant strides toward bringing their own checkpoint inhibitors to market for a diversity of hard-to-treat malignancies over the past year.

Pfizer, in particular, has taken an especially keen interest in this ultra-high-growth market, presumably due to its recent struggles with the patent cliff. In 2014, for instance, Pfizer struck a broad development deal with Germany's Merck KGaA to explore the anti-cancer properties of its promising anti-PD-L1 compound avelumab.

As this space is chock-full of top notch competitors, though, Pfizer might be looking to strike additional deals to give it an edge in this high dollar market going forward.

Agenus could be on Pfizer's radar

The tiny immuno-therapy company Agenus (NASDAQ:AGEN) could be on Pfizer's radar due to both its checkpoint inhibitor platform, as well as its lagging share price. Although the company has inked partnerships with both Incyte (NASDAQ:INCY) and Merck for its broad checkpoint inhibitor platform, for instance, its shares have basically failed to excite the broader market: 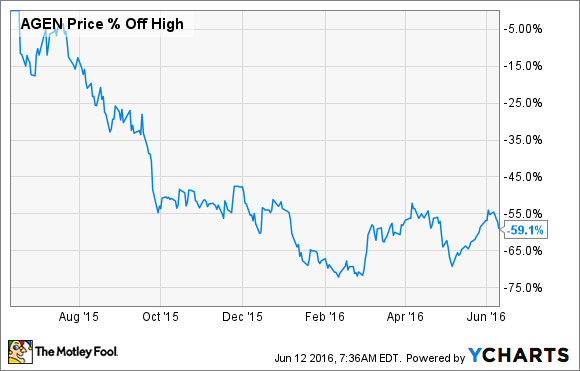 Agenus' shares even failed to garner much interest following the initiation of an early stage study for its anti-CTLA-4 antibody, AGEN1884, in solid tumors last April. Keeping with this theme, the FDA clearance of its anti-GITR antibody, INCAGN1876 -- that's being co-developed with Incyte -- for clinical trials in metastatic tumors also failed to move the needle, so to speak.

While the market has yet to take notice, there's good reason to believe that this stock is woefully undervalued, and may attract the attention of bigger fish like Pfizer as a result. The core issue at play here is that Agenus sports a wide range of monoclonal antibodies targeting a rich array of receptors, such as GITR, OX40, PD-1, CTLA-4, TIM-3, LAG-3, and CEACAM1.

In addition to its current cohort of experimental anti-cancer therapies, Agenus also owns 4-Antibody, giving the company a powerful antibody drug-discovery platform. So, with a market cap of less than $350 million at the time of writing, and a platform of potential blockbuster anti-cancer drugs, Agenus appears to offer tremendous value for a company like Pfizer that's attempting to carve out a significant slice of the red hot immuno-oncology space.

Although this match seems to make a lot of sense for Pfizer from a competitive viewpoint -- and perhaps Agenus' beleaguered shares to boot -- I think it's a long-shot. After all, Pfizer does have other checkpoint inhibitors under development right now, resulting in some noteworthy overlap with Agenus' current platform. The drugmaker also seems to be pivoting toward cell-based treatments, like chimeric antigen receptor T-cell therapies, for its next major foray into immuno-oncology.

That said, I do think Agenus is simply too cheap not to be a viable buyout candidate at this point. Rather than Pfizer, though, my hunch is that an offer will ultimately come from either Incyte or Merck -- Agenus' main immuno-oncology collaborators. The short story is that both Incyte and Merck have kept their specific anti-cancer targets relatively quiet, which is a big reason the market hasn't built in much of a premium into Agenus' shares. If this ongoing clinical work with either of these larger pharmas hits the mark, though, I'd naturally expect a buyout offer to follow, especially at these depressed share prices.

Even though Agenus would seem to offer a strong anti-cancer drug platform for a relatively cheap price, it's important to remember that buying a stock based solely on buyout speculation is never a good idea. After all, there's no way to tell what's really going on behind the scenes at any of these larger pharmas, and buyouts rarely follow the path of least resistance. At the end of the day, the only real reason to buy, hold, or sell Agenus' shares is the likelihood that its immuno-oncology platform will ultimately hit pay dirt.