Southwest Airlines (NYSE:LUV) has been one of the better-performing airline stocks of the past year. It has risen by about 14% over that stretch, whereas a key index of airline stocks has fallen by 13% during the same period. 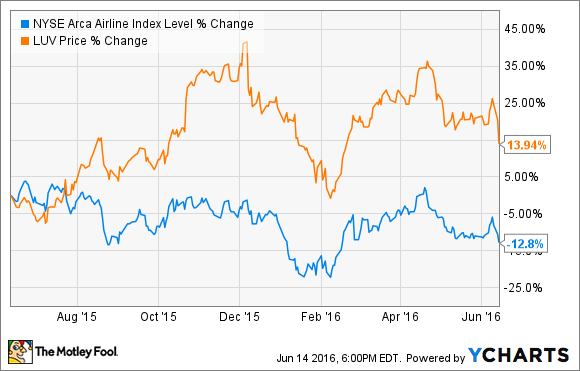 Despite its strong outperformance over the past year, Southwest Airlines stock has pulled back lately, along with most other airline stocks. Indeed, the shares now trade for less than nine times forward earnings.

However, Southwest faces two threats to its profit growth: year-over-year revenue comparisons that are about to get a lot tougher, and looming labor cost inflation. These factors represent key risks that could hurt Southwest Airlines' stock performance in the near future.

Will revenue take a turn for the worse?

Southwest Airlines has dramatically outperformed the rest of the U.S. airline industry in terms of unit revenue over the past year (that has been a key driver of its strong stock performance). In fact, the company recently confirmed it expects to post a modest increase in revenue per available seat mile (RASM) during Q2.

Meanwhile, many of its rivals expect to report mid-high single-digit unit revenue declines. For example, JetBlue Airways (NASDAQ:JBLU) recently projected that its Q2 RASM will sink 7.5% to 8.5% year over year. Just a year ago, it was JetBlue posting industry-leading unit revenue performance while Southwest's RASM was sinking.

A significant portion (though not all) of Southwest's revenue outperformance over the past year stems from its co-branded credit card deal, which was updated last July. The new agreement produces roughly $500 million in incremental annual revenue, boosting Southwest's RASM by about 2.5 percentage points.

Next month, Southwest will lap the implementation of the new credit card deal. As a result, Southwest's RASM will probably deteriorate on a sequential basis. By contrast, other airlines like JetBlue are likely to see their unit revenue trends start improving next quarter.

Rising labor costs represent another distinct threat to Southwest Airlines stock. Right now, Southwest is in negotiations with several of its labor unions, including representatives for its pilots, flight attendants, and mechanics. There's no way to know when the company will reach new agreements with its unions, but when it does, costs are likely to rise significantly.

The biggest source of cost growth will be from a new pilot contract. Pilot pay has been rising rapidly across the airline industry, and Southwest's pilots are growing increasingly frustrated about not having a new contract more than four years after the previous one became amendable.

A few months ago, the Southwest Airlines Pilots' Association offered a contract proposal calling for big raises and other work rule improvements. The union estimates that its proposal would increase Southwest's pilot costs by $508 million in 2017 -- and by $774 million in 2020 -- using 2015 as a baseline. The pilots are also asking for a signing bonus of more than $500 million, to make up for raises they would have received over the past few years.

Of course, the pilots aren't likely to get everything they want in a new contract. Still, even after a compromise, Southwest's costs are likely to rise by hundreds of millions of dollars annually. New contracts with other labor groups will add to this cost growth.

Southwest Airlines stock has benefited from the company's stellar earnings growth over the past few years. However, profit growth could be difficult to come by in the near future.

First, Southwest's return to unit revenue growth this quarter isn't likely to last. It will face much tougher comparisons beginning next quarter, which could cause unit revenue to decline again -- at least for a little while. Second, labor costs will move significantly higher after Southwest reaches new collective bargaining agreements with its unions.

JetBlue Airways stock has lost more than a third of its value since December as its profit growth has quickly faded. Southwest Airlines stock isn't likely to wipe out quite so dramatically, but it could still underperform if analysts have to cut their earnings estimates.

That said, Southwest shares are already dirt cheap, especially when you consider the company's strong balance sheet and long track record of profitability. This means the downside potential from these upcoming revenue and cost headwinds is already accounted for. Investors should be ready for some turbulence, but in the long run, Southwest Airlines will be fine.