Please ensure Javascript is enabled for purposes of website accessibility
Log In Help Join The Motley Fool
Free Article Join Over 1 Million Premium Members And Get More In-Depth Stock Guidance and Research
By Morgan Housel - Jun 16, 2016 at 11:31AM

A venture into the real world. 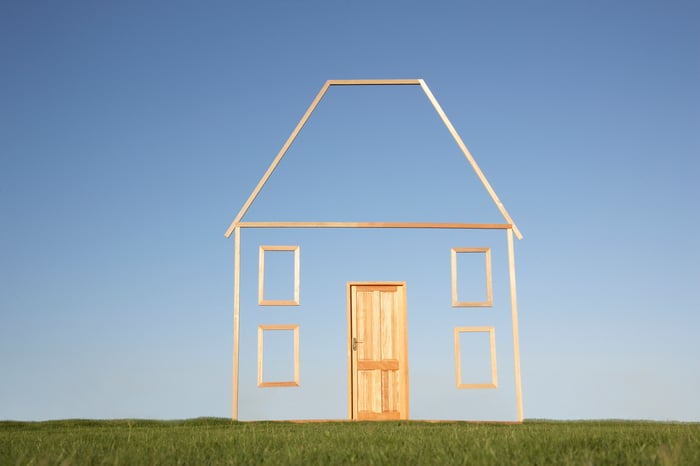 My wife and I bought a house last week. It's our first.

Buying a house is a big deal for everyone. It's especially big for us because I've spent years writing about the downside of home ownership. I've never been against home ownership, but I've always found its financial rewards overstated. "A large liability masquerading as a safe asset," I once wrote.

Renting until our early 30s was probably the best financial decision my wife and I ever made. It allowed us to quickly pick up and move when work and school opportunities arose. It let us live in five different cities in four states on each side of the country in ten years, without a moment’s hassle when it was time to leave. We reacted to a major flood in our apartment last summer with a chuckle -- it was someone else’s problem. “Renting is throwing your money away,” said our friends, blind to the idea that home equity and quality of life aren’t the same thing.

But with an eight-month old son and a better idea of where we want to settle, it was time to buy.

We did this purely for social and stability reasons. We love the home, the neighborhood, and a sense of settling down. Twenty years on I suspect it will look like a mediocre financial decision, especially when the opportunity cost of money sunk into the house is accounted. A good rule of thumb is that nothing in need of constant repair and requiring a half-dozen commissioned middlemen will yield superior investing results.

But here we are.

Here are a few things I learned.

1. A home is emotional. It's silly to pretend otherwise.

My wife and I pride ourselves on making unemotional financial decisions. But the first time we pulled into the driveway to tour the house she gasped and said, "Wow, I love it." I did the same.

And that was it. Emotion was involved and there was nothing we could do about it.

In theory, buying a home should be a calm decision made on a spreadsheet. In reality, you walk through the house and picture where furniture will go. You imagine Christmas morning with your kids and barbecues with your friends.

The night before our bid was accepted I asked my wife how she'd feel if we lost the house. "I'd be devastated," she said. I would have been too. I know this is the worst possible way to think about the biggest financial decision of your life, but it was the reality of what we were doing. It's the reality of what everyone does. No one thinks about a home the same way they think about a lawnmower.

We bought a house we love for a price well within our debt-averse budget. In that sense, we stuck to calm, unemotional decision-making. But we did a few things I never thought we would. We didn't look at every option on the market; we fell in love at first sight. We didn't want to do any remodeling; Now we're going to blow up half the house. We promised ourselves we wouldn't get into a bidding war. But we did.

And I don't regret any of it. I understand it's the reality of getting a house we love and I shouldn't pretend otherwise.

Jason Zweig of The Wall Street Journal once wrote:

"I have no emotional attachment to the house; I never liked it physically," Mom told us. "But everything important that ever happened in our life as a family is here, and I can't just leave all that behind."

Buying a home is not something you do to maximize your return on investment. It's something you do to provide stability and quality of life for your family. It's far more like picking a spouse than picking a stock. The reason so many people got burned during the housing bubble is because they came to believe the opposite.

2. Technology has shaken up how people find homes, but it's barely touched fees

We found the house on Zillow ourselves. Almost everyone I know in my generation does the same. Technology has upended how people find homes, from the days when realtors held all the information to putting consumers in the driver's seat.

But we still needed a realtor to help us draft the offer, fill out all the paperwork, and answer our questions. Not doing this would set us up for screwing something up and putting us in a legal mess.

Between our agent and the seller's agent, the commission was many percentage points of the sales price. Pretty standard.

My dad and I talked about how high realtor fees are. I said it's not a problem in my situation because the seller pays the commission.

"No, Morgan, you are," he said. "You're the only one in this transaction writing a check. Believe me, you're paying it. You're paying everything. It's built into the price."

Other than the home itself, the realtor commission is the largest single expense I've ever paid in my life, by far. We're happy with her service. But, boy, did we pay for it.

I'm surprised that in the world of the 0.04% fee index fund, the average real estate commission is still more than 5%.

And those fees have barely budged over the years, even as information increased with online portals like Zillow and Redfin. The average brokerage commission was 5.94% in 1993, and 5.02% in 2005, according to the Department of Justice – which dryly notes that "consumers are not enjoying all of the possible benefits of competition in the real estate brokerage industry."

3. I was shocked at how complicated it was. I understand why people get swindled.

I understood closing costs and prepaids, but I had no idea how fast they piled up.

I had never heard of property transfer taxes.

I didn't know there were various levels of title insurance, some of which are optional.

I had no clue how escrow for property taxes worked. I always wondered why people paid their property taxes each month to their mortgage company rather than paying them directly to the county twice a year, keeping more cash in their hands. Now I get it: Skip that option and you'll pay a higher mortgage rate.

I consider myself reasonably astute in personal finance, because it's so much of what I write about for a living. But I can't count how many times I had to stop, realize something confused me, and spend an hour of research to understand what I was about to sign. After going through our loan documents I sent at lest 10 emails to the bank with various forms of, "What's this?" What is this?" "WHAT IS THIS?"

Even with a realtor, homebuyers need to be amateur lawyers to fully understand what they're doing. I can't imagine what it's like for people for whom finance is already a daunting topic. And that's most people.

This probably explains why transaction fees are still high. When you combine emotion with legalese, the path of least resistance is to just sign your name without considering what you're doing. I had a few moments of, "They wouldn't be offering me this if it wasn't in my best interest" only to stop, want to slap myself, and keep researching.

Now the remodeling begins. That'll be another story.