Stocks declined on Friday, with the Dow Jones Industrial Average (DJINDICES:^DJI) shedding 59 points or, 0.3%, and the S&P 500 (SNPINDEX:^GSPC) dropping 7 points, or 0.3%. For the week, major indexes finished down 1% but remain in positive territory so far in 2016. 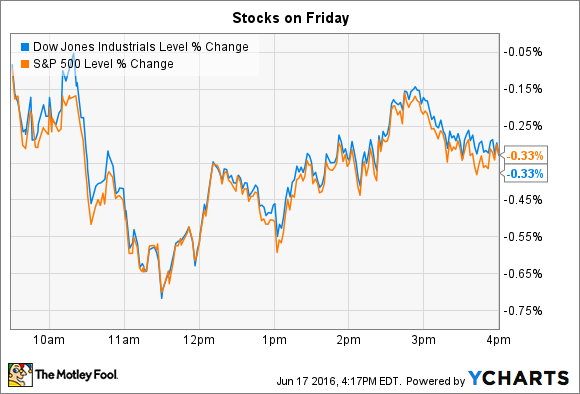 In economic news, the pace of housing starts remained strong in the month of May. Official data showed that home constructions were started at an annual rate of 1.16 million homes last month, marking a 10% boost over the prior year period. Building permits grew at a faster rate, pointing to more healthy gains ahead in the housing market.

As for individual stocks, Revlon (NYSE:REV) and Synaptics (NASDAQ:SYNA) both made notable moves on Friday.

Revlon spiked 7% higher on news that the company struck a deal to acquire Elizabeth Arden (NASDAQ: RDEN) for $14 per share (at a 50% premium from its closing price on Jun. 16). The buyout gives Revlon's beauty portfolio, led by its cosmetics and hair care lines, an immediate boost by adding Elizabeth Arden's popular skin care and fragrance brands. Revlon also gets a better footing in key markets like China where Elizabeth Arden is already well positioned.

"By bringing together two highly complementary, iconic brand portfolios," executives said in a press release, "Revlon will benefit from greater scale, an expanded global footprint, and a significant presence across all major beauty channels and categories." The deal is projected to save over $100 million in annual operating costs.

Revlon will borrow close to $3 billion to fund this purchase, which will leave it highly leveraged with a debt level of more than four times annual adjusted earnings. Management believes they can pay down that hefty burden quickly, though. "The combined company will be well positioned to de-lever based on its anticipated strong cash flow," they predicted.

Synaptics' stock fell to a multi-year low after the human interface tech specialist revealed plans to lay off 9% of its workforce. The move is necessary to "align the company's cost structure...with its revenue levels," executives explained in a filing with the SEC. Synaptics will take a one-time charge of $14 million on the reorganization program, which also includes closing out some office space. In addition, most of the company's executives are taking a 10% pay cut, while CEO Richard Bergman's salary will be reduced by 20%.

Wall Street was already aware of Synaptics' business struggles. Sales slumped by 16% last quarter, for example, as demand for high-end smartphones declined. The surprising part is that executives at the time seemed to suggest that this was only a short-term problem. "Our key growth pillars remain strong, and we expect to see a return to more normal seasonal growth patterns in the second half of the calendar year," Bergman said in an April press release .

The cost cutting move implies that management sees a more persistent demand shortfall ahead, and the surprising shift in outlook is a good reason for investors to take a step back from the stock.