What exactly is a cheap stock? There's the value angle, but you could also be looking for companies with low share prices -- say, under $10. That's a price point below which some institutional investors won't tread, but as a retail investor, there's no reason for you to avoid low-priced stocks. And right now Alcoa Inc. (NYSE:AA), Westmoreland Coal (NASDAQ:WLB), and ArcelorMittal SA (NYSE:MT) are all below $10 -- and worth a closer look.

Alcoa is best known as an aluminum company, but it does much more than that, and it's going to great lengths to show the world just what it's made of -- it's splitting in two. The Alcoa name will go with the company's legacy aluminum business. The part of the company that makes high-tech specialty parts for industries like aerospace, meanwhile, with be spun off and dubbed Arconic. That split is expected to take place later this year.

With commodity markets in the doldrums, Alcoa's aluminum business has been struggling. There's no way to sugarcoat that. But Alcoa has been working hard to right-size itself so it can better compete -- and has been doing a good job of it. Summing up 2015 results in this business, Alcoa CEO Klaus Kleinfeld said, "We took aggressive actions: closed and curtailed more unprofitable capacity, accelerated productivity and weathered the storm with upstream [the aluminum business] remaining profitable."

The Arconic business, meanwhile, has been doing much better. Although the first quarter saw revenue fall around 2%, under that number were revenue gains of 6.6%, driven by acquisitions, offset by metal price and currency fluctuations. Those last two are pretty much out of Alcoa's control. But the revenue gain they offset shows Alcoa is still expanding this business at a nice clip. In fact, some investors believe that Alcoa's price reflects only the value of the growing Arconic business, suggesting that buying Alcoa today will net you the aluminum business for "free" once the split takes place.

Another stock that's worth a closer look is Westmoreland Coal. At first blush, you might think it makes complete sense for a coal company's stock to be trading hands below $10 a share. After all, the industry has been hit by a wave of bankruptcies, including industry giants like Peabody Energy and Alpha Natural Resources. The thing is, Westmoreland does things a little differently.

Peabody and Alpha have mines in key coal regions and then deliver their coal to utility and steel customers. Westmoreland only mines thermal coal, used for producing energy, and, more importantly, focuses on mines where the utility customer's electric plant is literally right next door -- at the mouth of the mine, in industry speak. 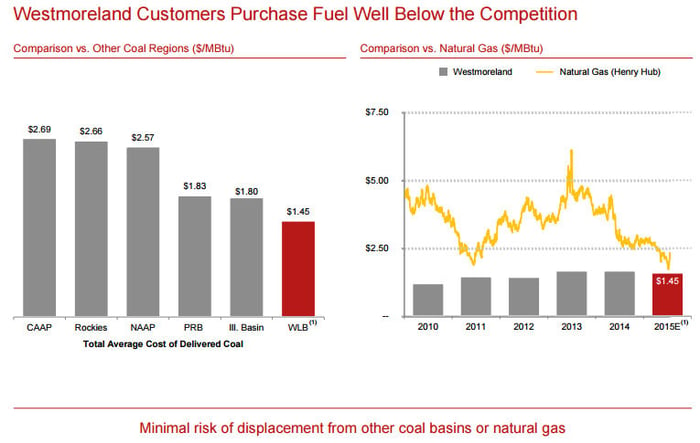 This is an important distinction because one of the biggest costs of coal is transportation. Since Westmoreland doesn't really have to deal with transportation costs, it can offer coal to its customers at relatively cheap prices. In fact, Westmoreland's coal is even competitive with historically low natural gas prices, the fuel option that's displacing coal in many markets. Add in the fact that nearly 75% of the company's coal is contracted out to 2020, and you start to see a different type of story shaping up. This could very well be a case of the baby being thrown out with the bath water.

To big to fail?

Finally, there's ArcelorMittal, one of the world's largest steel mills. It also has material mining operations, making it a vertically integrated Goliath. But steel has been in the doldrums for a while now and ArcelorMittal's top and bottom lines haven't been spared the pain. In fact, the company's top line has fallen for four consecutive years and, worse, it's bled red ink throughout that span.

So what's to like? For starters, the company has been moving aggressively to deal with near-term debt issues that have hung over the stock. With that work well under way, the company's long-term debt, at roughly 40% of the capital structure, looks a lot less daunting. And to be fair, owning and operating steel mills is a capital-intensive business.

The question is how long can ArcelorMittal bleed red ink before there's real problems. That's a harder call to make, and your take on it will determine how interested you are in the company. But ArcelorMittal is one of the few steel mills with a truly global footprint, allowing it to benefit from pockets of strength (like the U.S. market today) and the eventual upturn that will appear throughout the industry once the current supply/demand imbalance is worked off. And with the company's balance sheet looking a little better, it seems like getting past the dark clouds to the silver lining is an increasingly likely outcome.

When you say something is cheap, people often think it's a quality thing. But that isn't always the case. Sometimes things are cheap for reasons that don't fully reflect the value being offered. When it comes to stocks trading below $10 a share, a little digging can uncover some potential diamonds. Alcoa, Westmoreland, and ArcelorMittal all have unique qualities that could make them great opportunities despite their low stock prices. It's time you took a look.