All you need are time, a savings plan, consistency, and the power of compound growth. 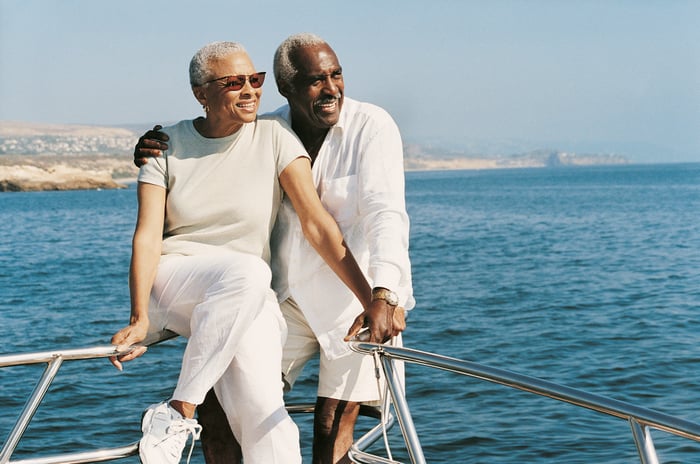 Like many other things in life, saving for retirement is easier when you have a specific goal. And while $1 million doesn't have to be your magic number, for most Americans, saving up a nest egg of a million is a pretty safe bet. There's no way to know exactly how much money you'll need in retirement. After all, you don't know how long you'll live or what unexpected costs you may face, but there are some general guidelines out there worth paying attention too.

If you save up $1 million and follow the 4% rule, which says you should draw down your retirement savings by 4% each year, then you'd have $40,000 a year to spend, plus whatever income you get from Social Security and other sources. For most retirees, that's plenty enough to get by.

And the best news is that saving up $1 million isn't as hard as it might seem, thanks to the power of time and compound interest. Here's what it will take to get there based on where you are in life.

Time is your biggest asset as an investor, and starting young -- for those who can -- is the best way to ensure a comfortable retirement.

Assuming a 10% annual rate of return -- the historical average of the S&P 500 -- and 40 working years remaining, a 25-year-old could build a $1 million retirement nest egg by saving just $175 a month in their investment accounts. Moreover, their total contributions over those 40 years would amount to less than 10% of that total -- just $84,000. All the rest would come from returns on investment.

That said, contributing a set amount of money each month over your entire career may be unrealistic, especially given that young people tend to earn more money as their careers progress, and they may also need to pay down college loans or save up for major purchases like a home. Inflation will also lower the value of a defined contribution. However, that also means younger people may want to set their goal above $1 million, as the dollar's buying power is sure to decrease significantly between now and when they retire.

One smart strategy for keeping up with inflation is simply to raise your contribution each year by 3%, the historical inflation average. This should be manageable, as annual raises tend to match cost-of-living or inflation rates.

No matter how you start, starting early -- even if you have very little to save -- is vital, as it will maximize the benefits of compound growth. Investing just $50 a month from age 25 to 35 would yield a nest egg of $10,000 in 10 years. As you age, such a head start can make a big difference in your ability to reach your goal, as you'll see below.

For a 35-year-old starting from scratch, your monthly contributions would have to be more than twice as great as a 25-year-old's to hit the $1 million mark. Socking away $470 each month in your retirement investment accounts over the next 30 years will yield $1 million, assuming that historic average 10% annual rate of return. Your total contribution over the years would be $169,000.

According to a report from the New York Fed, Americans' real earnings tend to plateau in their 40s. Because your 40s are likely your prime earning years, you should also make them your prime saving years, as your money still has ample time to produce compound growth. And if you're starting from scratch, then your monthly payments will need to be significantly higher than a younger person's. To reach $1 million by age 65 with 10% annual growth, you'll need to contribute $1,330 a month. Your total contribution will be about $319,000.

As we noted in the previous example, starting this calculation with a nest egg helps. Carrying over the $57,000 in savings from our hypothetical 35-year-old makes a significant dent in the necessary contributions. With $57,000 in the bank, a 45-year-old would only have to invest $820 a month to reach $1 million by age 65.

For a 55-year-old who has no savings and hopes to retire by age 65 with $1 million in savings, the outlook is decidedly bleaker. As the math has shown us above, for every 10 fewer years a worker saves, the total amount of contributions required approximately doubles. A 55-year-old starting from $0 would need to make total contributions of $576,000 to reach a $1 million in a 10-year span, assuming returns of 10% per year. Given how little time they would have to let compound growth work its magic, their monthly contribution would have to be at least $4,800, or nearly $60,000 a year. For most Americans, that is just not realistic.

If a 55-year-old saver has an existing nest egg, then reaching $1 million becomes a little easier. For example, with $100,000 in the bank, you can get there with monthly contributions of $3,550. The more likely scenario is that you will have to extend your working years or cut back on your spending in retirement. For example, by working for another five years, you can cut the necessary monthly contribution in half to just $2,400 -- and that's with no savings to start with.

There's no magic formula for retirement savings, and life has a way of throwing curveballs -- think layoffs and medical emergencies -- that will force you to adjust your savings plan. But with commitment and discipline, your odds of reaching your goal are higher than you may realize.

As you try to figure out how to reach your "retirement number," remember that a 10% rate of return is not guaranteed. That is merely the average of what we've seen in the past, so giving yourself a longer time frame is always helpful. Not only will it help by giving compound growth more time to work, but it also helps to cushion you against volatility. Still, the stock market has achieved that 10% average annual return despite of two world wars, the Great Depression, the financial crisis, and a number of other calamities. So while there are no guarantees, it stands to reason that U.S. stocks will remain a good bet going forward.

How Much Income Will Your Retirement Savings Provide You With? Here's How to Know.
405%