The downturn in the oil market hit oil stocks hard, with well-known producers Chesapeake Energy (OTC:CHKA.Q), Whiting Petroleum (NYSE:WLL), and Devon Energy (NYSE:DVN) down substantially over the past year. 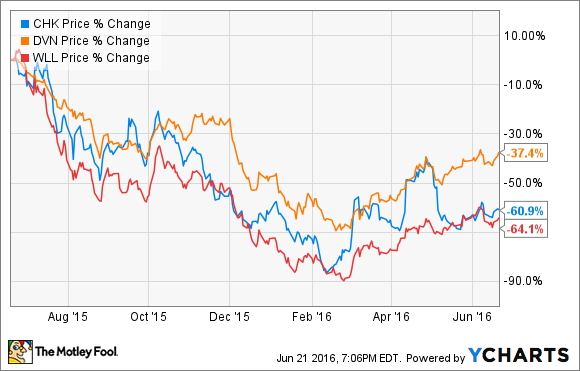 However, with oil prices starting to improve, some investors see the chart above and get excited. They see the opportunity to buy beaten-down oil stocks at a discount. The problem with that assessment is that two of those oil stocks still have problems and should be avoided. Here's why that is the case, as well as which one I would consider buying right now.

Too focused on the short cycle

At their core, Chesapeake Energy, Devon Energy, and Whiting Petroleum are shale drillers. In fact, Whiting Petroleum and Chesapeake Energy are focused almost entirely on shale drilling after both sold off the bulk of their conventional assets. Devon Energy, likewise, is mostly focused on shale plays, though it does operate oil sands assets in Canada. In fact, roughly half of its oil production and nearly 20% of its overall production comes from the oil sands. That provides Devon with important diversification both geographically and geologically.

The reason Devon Energy's oil sands assets are worth noting is because these are long-cycle assets that have low decline rates. What that means is that, after the initial investment is made, these assets typically produce at a relatively steady rate for years with minimal capital requirements. Contrast this with shale wells, which have production profiles that decline very rapidly. That rapid production decline has proven problematic during the downturn, with many companies struggling to maintain their production rates. Because oil prices have fallen, many producers are no longer generating enough cash flow to provide them with the funding needed to drill an adequate number of new wells to maintain production. Devon Energy, on the other hand, has a lower hurdle to overcome thanks to the stable base of output from its oil sands assets.

Because shale wells deplete so quickly, producers need to invest heavily to not only replace declining production but grow output. This often led all three companies to outspend cash flow from operations on capex: 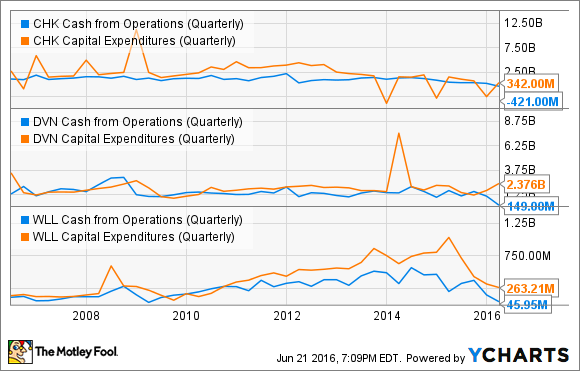 The big difference is that Devon Energy has avoided relying heavily on debt to fund its growth. That enabled it to maintain an investment grade credit rating, which has proven to be a competitive advantage during the downturn. The same can't be said for Chesapeake Energy nor Whiting Petroleum, both of which have been weighed down by sinking credit ratings.

Two major credit rating agencies have downgraded Chesapeake Energy's debt this year, which is now down to CCC/Caa2. That rating implies financial distress and unsustainable leverage. Whiting Petroleum also had its credit rating downgraded this year, with one agency slashing its rating by five notches to Caa1. Again, that C-level rating implies a heightened risk of restructuring, which we saw when the company exchanged $429.7 million of unsecured notes for new unsecured convertible notes to improve its financial situation.

Devon Energy, on the other hand, does not have these same credit concerns thanks to its much stronger balance sheet and credit rating. That said, its finances have taken a hit during the downturn. Not only did it spend billions to grow production last year after following the same growth-at-any-cost approach of both Chesapeake and Whiting, but it spent $2.5 billion on acquisitions late last year. Those transactions were initially funded with its balance sheet, though Devon recently sold several non-core assets to offset the cost. Still, just to be in the position to make acquisitions during the downturn is a step above both Chesapeake and Whiting, which have focused on selling assets to reduce debt.

Given their sole focus on short-cycle shale and weaker balance sheets, Chesapeake Energy and Whiting Petroleum are two stocks I would still avoid despite the improving oil market. However, I would consider Devon Energy. It not only procures a portion of its production from longer-cycle assets, but it has a stronger balance sheet. These factors put the company in the position to restart its growth engine at a time when the other two are still contracting.