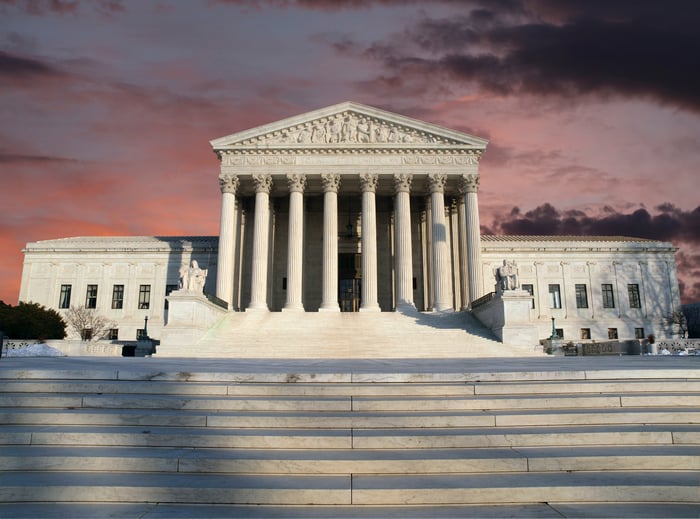 Litigation is nothing new for tobacco giant Altria Group (NYSE:MO). Throughout its history, the cigarette company and its peers have had to deal with numerous lawsuits alleging that tobacco producers should be held financially responsible for illnesses that smokers of their products have suffered. Altria has an admirable track record in fending off such litigation, and the company's latest victory in the Supreme Court involves a case that has run since the turn of the millennium. Investors applauded the favorable ruling, sending the stock to new heights. Let's take a closer look at Price v. Philip Morris and the implications of the recent decision from the highest court in the nation.

What the case involved

In early 2000, Sharon Price acted as lead plaintiff in a class action lawsuit against Altria, which at the time was known as Philip Morris, Inc. The lawsuit introduced a new theory of legal liability against Altria, arguing that the use of the word "lights" and "lowered tar and nicotine" on brands like Marlboro Lights violated the Illinois Consumer Fraud Act and the Uniform Deceptive Trade Practices Act. Unlike other past lawsuits that sought personal injury compensation, the lawsuit only asked for economic damages. After a non-jury trial, the judge ruled in favor of the plaintiffs and awarded a verdict of $10.1 billion in economic and punitive damages.

However, in 2005, the Illinois Supreme Court reversed the judgment of the lower court. The court's argument included the fact that the Federal Trade Commission had authorized Altria to use the words "lights" and "lowered tar and nicotine" in its marketing. The reversal wiped out the verdict.

The plaintiffs in the case subsequently appealed the reversal, leading to a decade of further litigation. In 2014, a state appeals court reinstated the original multi-billion dollar verdict. However, late last year, the Illinois Supreme Court once again overturned the verdict.

The latest from Price

The most recent decision on the case involved the U.S. Supreme Court. After striking out with the Illinois courts, the plaintiffs argued that one of the state court justices who had ruled on the case in 2005 had received campaign contributions that indirectly came from Altria. Earlier this week, however, the Supreme Court decided not to choose the case as one it would review.

In the eyes of Altria, that decision should be the death knell for Price. As Altria associate general counsel Murray Garnick said in a press release, the "action by the U.S. Supreme Court effectively ends this case once and for all. ... [A]fter countless hearings, motions, and legal maneuvers by the plaintiffs to reinstate judgment, the outcome remains the same."

A lawyer for the plaintiffs appeared to come to a similar conclusion in the comments that he made in a statement following the Supreme Court decision. In the words of Stephen Tillery, "Losing any case after 17 years of intense litigation is obviously disappointing, but all of us who represented the plaintiffs in Price feel that the case was socially significant and brought into public view facts that needed to be revealed."

Of course, Altria will still face plenty of legal challenges even after its latest victory. Indeed, some shareholders have noted the increase in litigation and regulatory activity lately, raising concerns that the company could be under greater danger than it has in the past. A different Supreme Court decision left intact an adverse jury verdict against Altria in Oregon, and decisions in Florida and Connecticut have also raised new potential for legal liability.

Nevertheless, Altria investors have gotten used to the idea that the company is under constant threat on the legal front. As long as the company can continue to beat down truly massive judgments like the 11-figure verdict in Price, Altria shareholders could keep seeing the stock advance into uncharted territory.