The e-commerce giant turns over its inventory far more slowly today than a decade ago -- barely faster than Wal-Mart, and a lot slower than Costco.

In a lot of ways, Amazon.com (AMZN -1.24%) is an extremely efficient company. Its vast network of distribution centers ensures that Amazon can offer an unparalleled selection and deliver products to customers quickly. In some of its warehouses, robots from Kiva, a company Amazon acquired a few years ago, reduce the time it takes to pick, pack, and ship an order, all while cutting costs by as much as 20%. Amazon's endless drive for improved efficiency gives the company a major advantage.

But there's one area where Amazon has become substantially less efficient over time, creating hidden costs for the company. Inventory turnover -- the number of times a retailer sells through its inventory each year -- has tumbled at Amazon over the past decade. Despite the benefit of not having thousands of stores spread across the country, Amazon now moves inventory barely faster than Wal-Mart (WMT 0.80%) and substantially slower than Costco (COST -0.48%).

The downside of Amazon's strategy

A high inventory turnover rate means less inventory needs to be on hand at any given time. This reduces the amount of capital tied up in inventory, as well as the space needed to store it. For example, imagine two stores that sell the same products and produce the same amount of sales each year. Store A only turns its inventory over once a year, while Store B turns it over twice a year. Store A needs enough space to store a full year's worth of inventory, while Store B requires half the space. This leads Store A to have higher costs, lower margins, and since more capital is tied up in inventory, a lower return on invested capital.

Amazon turned over its inventory 16 times in 2004. That's a quick pace for any retailer. Last year, Amazon's inventory turnover rate was just 8, the result of a decade-long decline. 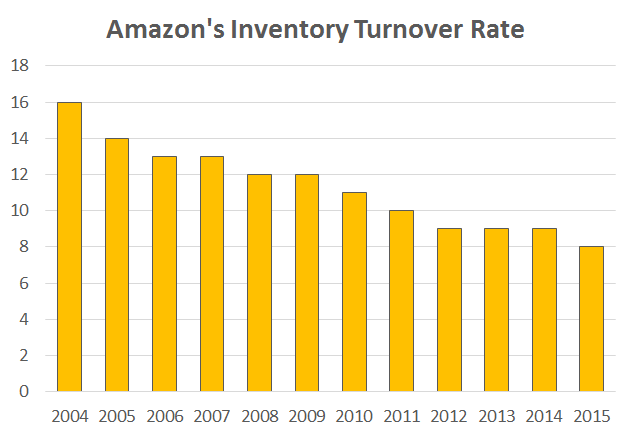 Amazon's strategy is the reason for this steep decline. The company aims to offer an unrivaled selection of products at low prices (basically Wal-Mart's strategy put into overdrive). According to ExportX, Amazon's U.S. website offered a mind-boggling 488 million different products at the end of 2015, and it's been adding nearly half a million new products each day for the past 16 months. Some of those are sold only by third-party sellers, though, not Amazon itself, so this number may overestimate the true total. For comparison, a typical Wal-Mart supercenter carries around 140,000 separate items.

This massive selection comes at a cost for Amazon. Many of these items sell in low volumes, which means that they sit in one of the company's warehouses, taking up space and locking up capital. Being able to offer every possible product a customer could want drives sales and helps foster customer loyalty, but it also makes Amazon's inventory turnover rate unexceptional compared to those of other retailers.

Amazon still turns over its inventory at a faster rate than many retailers, but its previous advantage over Wal-Mart is gone. Despite all of its customer purchase data, tens of millions of Amazon Prime members, and its complete dominance of online retail, Amazon's inventory turnover rate is no longer very impressive.

Amazon's strategy of expanding its assortment of products has helped the company grow sales at a rapid pace. Amazon grew sales by 28% year over year during the first quarter of 2016, an incredible feat for a company already generating over $100 billion of annual revenue. But a continually slumping inventory turnover rate is holding back the company's profitability.