For the past year and a half, unit revenue has been on a downward trajectory at the three biggest U.S. airlines: American Airlines (NASDAQ:AAL), Delta Air Lines (NYSE:DAL), and United Continental (NASDAQ:UAL).

Fare weakness has been an issue in every region of the world, but nowhere has it been worse than in Latin America, and particularly Brazil. Fortunately, there seems to be a light at the end of the tunnel. Massive capacity cuts in the U.S.-Brazil market and the strengthening Brazilian real could lead to much better results in the second half of the year.

American Airlines' relative weakness can be traced to its outsized presence in Brazil. (As of last fall, its market share there was nearly double that of United and Delta combined.) Last quarter, American's PRASM on routes to Brazil plunged a stunning 39% year over year.

American Airlines has been responding to this revenue weakness by cutting capacity in Brazil. However, on the company's earnings call in April, American Airlines President Scott Kirby noted that until recently, other airlines had been continuing to add flights between Brazil and the U.S.

Indeed, looking at the Latin America region as a whole, American trimmed capacity 1.1% year over year in Q1, but Delta and United increased their capacity by 4.8% and 12.3%, respectively.

Airlines have finally absorbed enough pain in Brazil that they all seem to be committed to capacity cuts now. American Airlines has dropped four routes since the beginning of the year, including two just last month.

Meanwhile, Delta and United executives in April stated that they have started to reduce capacity to Brazil. Even LATAM -- the largest Brazilian airline and the other major player in the U.S.-Brazil travel market -- has said that it will slash U.S.-Brazil capacity by 35% year over year in the second half of 2016.

These universal capacity cuts should help airlines to fill more seats on their U.S.-Brazil flights in the second half of 2016 -- and do so without offering fares so low that they can't earn a profit.

A stronger real helps, too

Beyond general economic weakness in Brazil, American, Delta, and United have been punished by the weak Brazilian real. Between September 2014 and September 2015, the real lost nearly half of its value relative to the U.S. dollar. 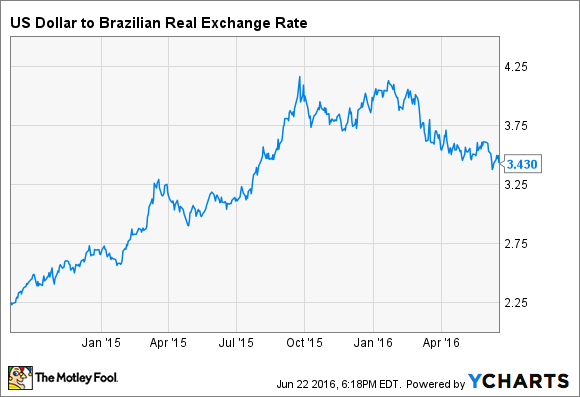 This meant that by late 2015, airlines selling tickets in Brazil were getting dramatically less revenue after converting real-denominated ticket sales into dollars. The only solution is to raise real-denominated fares: something that has been tough to do with Brazil's economy in tatters.

However, the real has strengthened by nearly 20% against the dollar in the past five months and is now down just 10% year over year. If the exchange rate stays near its current level of about 3.36 reais per dollar -- which is a big "if" -- foreign currency will become a tailwind for the U.S. legacy carriers in Brazil by Q4.

American, Delta, and United are all on pace to report mid-high single digit unit revenue declines yet again in Q2. But the tide may be starting to turn.

Earlier this week, United Continental executives stated that unit revenue will decline 6.5%-7.5% during Q2, coming in at the favorable end of the company's guidance range. Latin America was one of the two regions where United's results were better than expected. Additionally, while corporate demand was weak during the first part of the quarter, business travel demand has strengthened in the past month.

In short, while it may take a few quarters for the U.S. legacy carriers to get unit revenue growing again, the days of mid-high single digit PRASM declines may be drawing to a close. Better results in Brazil will play a key role in this emerging revenue recovery: especially for market leader American Airlines.

American Airlines, Delta, and United Are About to Get Relief in Brazil @themotleyfool #stocks $DAL $UAL $AAL Next Article
Current