What: Shares of Texas Instruments (NASDAQ:TXN) have gained 13% so far in 2016, according to data from S&P Global Market Intelligence. The semiconductor veteran left the S&P 500 market benchmark far behind at a mere 2.2% lift, and the SPDR S&P Semiconductor (NYSEMKT:XSD) sector index didn't rise more than 2.5%. In short, TI stands head and shoulders above the market this year.

So what: TI has delivered two earnings reports in 2016, beating bottom-line estimates in both. The fourth-quarter report in January revealed a 2% drop in revenue but record-level gross margin. Sales continued to decline in April's first-quarter release, though gross margin rose to set yet another all-time record.

Long story short, TI is actively optimizing its business operations for maximal efficiency and even further margin strength. If that means leaving a few low-margin sales on the table or divesting some less profitable product lines, so be it. TI is going there. 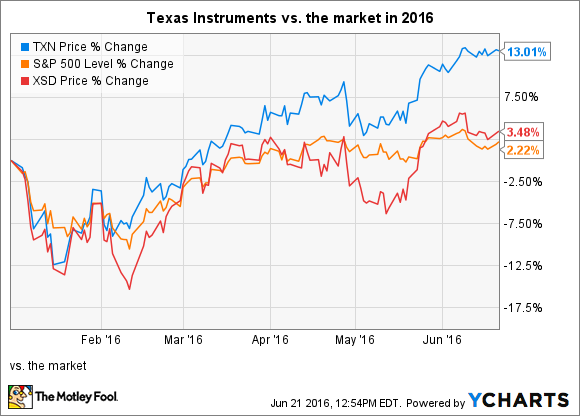 Now what: The cash produced by TI's rising profit margin is going straight back to shareholders, as management's stated policy is to return 100% of free cash flows directly to owners.

Over the last five years, this policy has reduced TI's share count by 13% while dividend payouts tripled. Share prices also doubled, putting a damper on the effective dividend yield, but yields still rose 47%.

As the company is quick to adjust to changing market conditions, its stock is the kind you can stick in your portfolio today and sleep soundly for decades ahead.