Whether it's several years -- or decades – from now, your retirement date can seem like an eternity away. Wherever you land on that spectrum, though, you're likely questioning if you'll end up with enough savings to meet your financial goals.

Stocks make a great choice as retirement investments because, while their prices can swing wildly in a given year, they tend to rise over longer time frames. Offering plenty of flexibility, a retirement account full of stocks can accumulate wealth from market gains, profit growth, and dividend payments.

Home Depot is the nation's biggest home improvement retailer, which is a good position to hold as the housing market churns higher. Rising spending on homes has pushed comparable-store sales up by 5% or better in each of the last three fiscal years. Net profit margin, meanwhile, has jumped to 8% of sales from 4% in 2009.

Better still, Home Depot's leading brand and effective management is keeping it far ahead of rivals. For example, Lowe's profitability improvement hasn't been nearly as substantial since the 2009 bottom: 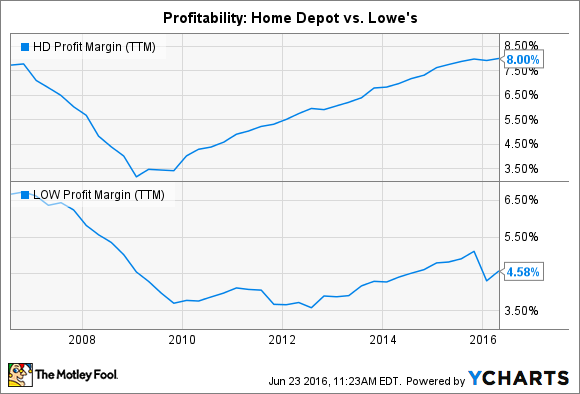 Home Depot's operating strength provides a decent cushion against the inevitable ups and downs of the housing market -- so does a dividend payout that's nearly tripled in the last five years. While the stock is likely to be volatile over time, shareholders have good reasons to believe their investment will grow at a market-beating pace.

Even with 24,000 locations around the world, Starbucks' business isn't nearly done expanding. In fact, the opportunities CEO Howard Shultz and his executive team have for growth are almost too numerous to try to quantify. I'll list just a few of the biggest, though: geographic expansion into China, category growth into tea, rising food sales, a surging packaged goods division, delivery, and small-footprint stores.

Investors are already reaping the benefits of many of these positive trends. Starbucks' profit margin set a new high, and earnings soared 20% last quarter. "The record-setting performance we delivered in the first half of fiscal 2016 ideally positions us to benefit from the investments we are making," Chief Financial Officer Scott Maw said.

That focus on growth spending is one reason Starbucks' dividend yield is the lowest of the group. Investors wouldn't want it any other way, though, since investments in the business have the potential to produce the greatest returns over the next few years.

At over $300 billion of market capitalization, medical and consumer product titan Johnson & Johnson is one of the most diverse businesses on the planet. A dozen of its drugs are worth over $1 billion in annual sales each. Medical device revenue also accounts for a hefty 36% of the business.

Yet investors have more than just economies of scale to count on when making a long-term bet on this company. JNJ has, for example, demonstrated that it has a key advantage in innovating. A full quarter of sales last year came from products that were introduced over just the past five years. At the same time, its pipeline is kept packed by a huge commitment to future growth: JNJ spends $9 billion a year on research and development, a sum very few companies could hope to approach.

While it's impossible to predict what the global economy will look like 10 or 20 years from now, it's likely that healthcare will, if anything, play a bigger role than it does now. That's why a bet on a profitable dividend aristocrat like this makes sense.