The United Kingdom has voted to leave the eurozone, spurring a sell-off in equities around the world. As the "Brexit" drama unfolds, here are two banks I think you should avoid and one that deserves your attention.

Two banks to sell until the Brexit dust settles

About one-fifth of Goldman's revenue is generated from its U.K. operations, making it particularly exposed to any freeze in the capital markets or a slowdown in deal making as the country adjusts to its new, independent reality. The bank's London office not only serves the U.K. and Europe, but also runs the business's deal making in the Middle East and Africa. About 90% of Goldman's Europe-based employees work in London.

For Goldman, the worst-case scenario is that with London no longer in the EU, European Union leaders choose to move their eurozone securities and currency trading from London to an exchange within the remaining eurozone. In that case, Goldman would be faced with either a massive loss of business or an expensive reorganization on the continent.

Then there's JPMorgan Chase, the largest U.S. bank by assets. JPMorgan is a more diversified bank that Goldman, but it still has significant exposure to the British market, the eurozone, and the same trading businesses as Goldman. 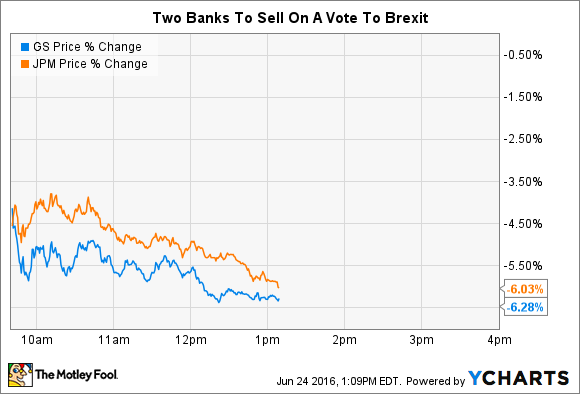 JPMorgan reports its largest risk exposures by country each quarter in its SEC filings. As of March 31, the U.K. was the bank's largest exposure outside the U.S. JPMorgan's third- and fourth-largest non-U.S. exposures are to Germany and France, the biggest continental European economies. Combined, these three countries have $107.2 billion in exposure at JPMorgan.

"Country risk" is defined as "the risk that a sovereign event or action alters the value or terms of contractual obligations of obligors, counterparties and issuers or adversely affects markets related to a particular country." WIthout a doubt, the Brexit is exactly the type of sovereign event this definition refers to.

Beyond that risk exposure, JPMorgan also faces the same scenario as Goldman in the event the eurozone distances itself from the London markets and exchanges.

Until the dust settles and the uncertainty clears, I'll avoid these two stocks, even at today's discounted prices.

One bank to buy on Brexit panic

Sometimes big, broad market moves can drive down the prices of stocks that, all things considered, shouldn't be affected. That's the case today with First Republic Bank (NYSE:FRC).

First Republic is a California-based bank with just over $62 billion in total assets. Unlike the two megabanks above, First Republic doesn't try to be everything to every client. Instead, the bank keeps things very simple, and it works.

The bank's strategy is to target high-net-worth clients in a select few U.S. markets and to sell those clients mortgages, investment management, insurance, and other lending and deposit products. It's the classic community bank business model, except it's laser-focused on the wealthiest and most creditworthy borrowers in the U.S. First Republic has no European exposure. 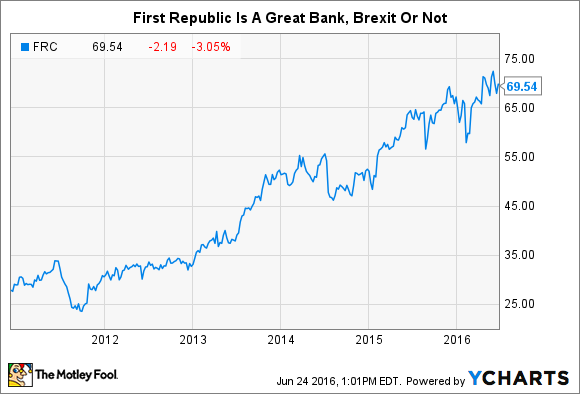 The strategy is extremely effective. In the first quarter, First Republic grew its loan portfolio 16.2% year over year. Wealth management assets jumped 30.3%. Deposits increased 27.5%. Earnings per share grew 23.9%. Since 2010, the bank has increased total loans at a compounded annual growth rate of 17%. CAGR for deposits over the same period is 20%.

The bank puts up those numbers without sacrificing credit quality. The average down payment paid by First Republic clients in the first quarter was 40% for single family residences -- more than double the industry standard. Since the second quarter of 2014, the average credit score of the bank's clients was 773. That same "average" client had a net worth of $3.3 million, with $667,000 in liquid assets.

This combination of impressive results and impeccable credit quality gives the bank strength in tough economic times. If you think the Brexit could trigger a broader recession, then I can't think of a better bank to weather the storm.