In a surprising turn of events, the U.K. voted to exit the European Union, and banking stocks unsurprisingly took a dive. However, investment banks such as Goldman Sachs (NYSE:GS) are getting hit harder than most. Here's why Goldman is down more than 6% in afternoon trading following the Brexit vote.

Why is Goldman Sachs getting crushed?

In a nutshell, Goldman's stock is getting hammered because, like the other big U.S. investment banks, Goldman has substantial exposure to the U.K. The bank has about 6,000 employees in London, so it's reasonable to worry about the Brexit's effect on the company's operations.

The Brexit has the potential to destabilize financial markets, leading to weaker capital markets activity, foreign-exchange headwinds, and general uncertainty, which is rarely a good thing for stocks. In fact, a recent report by Keefe, Bruyette & Woods found that Goldman's earnings could fall by nearly 8% in 2017 as a direct result of the Brexit.

Goldman Sachs CEO Lloyd Blankfein told staff in an internal memo that there will be no immediate change to the bank's business. This makes sense; all that has happened so far is a vote. The actual exit of Britain from the EU will be a lengthy process, and the terms of the exit are unknown at this point, so there's no reason to rush to judgement.

Other U.S. banks with large British exposure seem to feel the same. JPMorgan Chase (NYSE:JPM) CEO Jamie Dimon said the bank will maintain a large presence in the U.K., although he acknowledged that certain changes may need to take place as the Brexit plays out.

Further, in a separate statement, Blankfein wrote that Goldman has been preparing for either possible outcome for months, pointing out that the bank has a long history of adapting to change -- which I don't think most experts would dispute. 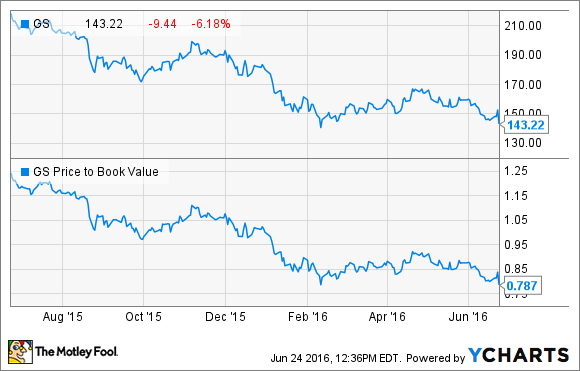 While the Brexit certainly creates uncertainty and will pressure investment banking earnings over the next few years, this could be a great opportunity for those with the patience to wait out the storm. Brexit aside, Goldman Sachs is trading for a substantial discount to the value of its assets and was attractive before this price drop. Now it looks like a bargain.