In a surprising turn of events, the U.K. voted to exit the European Union, and banking stocks unsurprisingly took a dive. However, investment bank Morgan Stanley (NYSE:MS) is getting hit harder than most -- down more than 8% the morning after the vote.

Why is Morgan Stanley getting crushed?

In a nutshell, Morgan Stanley's stock is taking a beating because the bank has substantial exposure to the British market. In fact, a recent Keefe, Bruyette & Woods report projected that Morgan Stanley would suffer more from a Brexit than the other large U.S. banks, with earnings per share expected to drop by 5.6% this year and 9% in 2017.

There are a few reasons that Morgan Stanley's bottom line could suffer because of a Brexit. First, a Brexit would lead to uncertainty and could slow capital markets activity, leading to significantly lower investment banking revenue, Morgan Stanley's bread and butter. Additionally, the Brexit could create serious currency headwinds if the euro and British pound depreciate against the dollar, as they are expected to do.

Finally, keep in mind that Morgan Stanley has a workforce of approximately 5,000 employees located in the U.K., many of whom will probably need to be relocated. In fact, although the company has denied the story, the BBC has reported that the company has already started to relocate about 2,000 London-based employees, citing sources within Morgan Stanley. Obviously, there would be significant costs related to such a relocation.

Time to buy or time to avoid?

While the Brexit certainly creates uncertainty and will pressure Morgan Stanley's earnings over the next few years, this could be a great opportunity for those with the patience to wait out the storm. After all, Morgan Stanley is trading for a substantial discount to the value of its assets, giving investors a margin of safety while the Brexit gets sorted out. 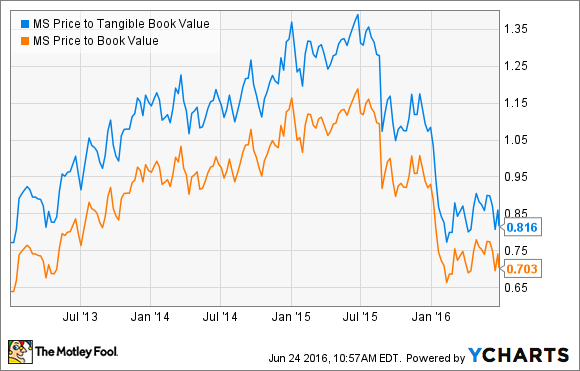