How the Brexit has affected your portfolio so far depends on what you hold. One sector was up Friday by more than 1% as other sectors plummeted.

When stocks fall, it's important not to throw the baby out with the bath water. Though the Brexit vote has roiled American markets, not all stocks are joining in on the tumble. As I write this, U.S. stocks are down just 3% on the day, as measured by the S&P 500 Index (^GSPC 0.25%).

Some industries are holding up better than others. As the chart below shows, returns are varying tremendously by sector. Financials have been hit the hardest. Utilities, however, are actually up by more than a percentage point in afternoon trading. 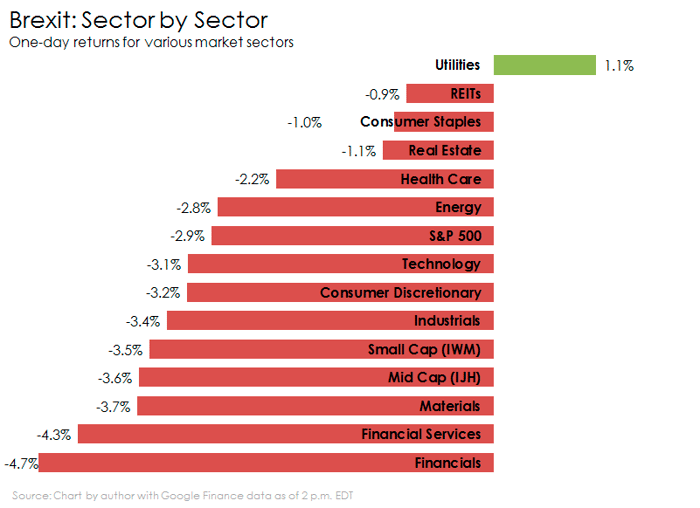 The way some sectors are performing can tell us a lot. That REITs and utilities are among the least affected isn't surprising. These stocks are the most "bond-like," as investors buy them for their relative safety and higher yields.

And bonds themselves are having a great day -- particularly government bonds. The 10-year U.S. Treasury yield fell to 1.58% today from 1.73% on Thursday. When yields drop, bond prices rise. It's only natural that utilities and REITs perform better than the average stock when the broader market drops and bond yields plunge.

For similar, bond-market-related reasons, financials are feeling more than their fair share of the pain today. Note that the Financial Select SPDR ETF (XLF) is underperforming the broader financial-services industry. That sector is heavily weighted toward traditional banks, which generally thrive when interest rates are higher, rather than lower.

Short-term interest rate futures are now pricing in a 10% probability of a rate cut in July, even after markets were recently expecting a rate increase in June.

Some selling appears much more indiscriminate. Note that small-cap and mid-cap stocks have fallen by much more than the S&P 500 today, as measured by the iShares Russell 2000 Index (IWM 0.54%) and iShares Core S&P Mid Cap ETF (IJH 0.39%). This is somewhat unexpected, given that smaller companies are generally less global and should be less affected by a potential economic slowdown in Europe than larger multinationals.

It's a good reminder that day-to-day trading is rarely even close to 100% logical. Institutional investors are likely selling off anything that has an air of "risk," rather than making long-term strategic moves based on last night's events. And smaller stocks tend to be more volatile than larger stocks in any case.

Your reaction to the Brexit sell-off likely depends on what's in your portfolio. Bond investors are crushing it, while financials investors are taking it on the chin. But the diversified investor is only down about 3% today -- by no means a panic-worthy loss.

Until You Learn This Investing Lesson, You Don't Know Anything
405%