The vote in the U.K. to leave the European Union is hitting these companies hard. Find out why. 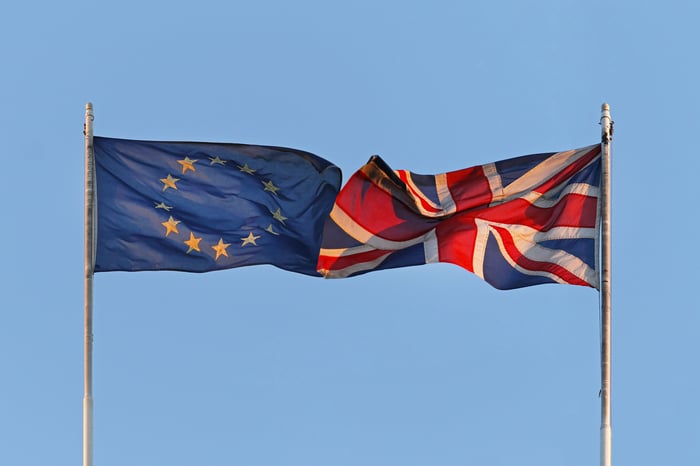 Investors got a nasty shock Friday morning when they found out that the long-awaited Brexit vote in the U.K. had gone against them. Stocks had soared Thursday in hopes that voters would choose to remain in the European Union, but in the ending tally, 52% of U.K. voters chose to leave the EU. As a result, stock market around the world plunged. Based on current futures trading, the U.S. stock market will follow suit with a substantial drop of around 3% when it opens this morning. Already, several sensitive stocks are getting hammered in premarket trading, and Goldman Sachs (GS 1.06%), Freeport-McMoRan (FCX -1.87%), and PPL (PPL -0.61%) are among those taking the hardest hit.

Goldman Sachs traded down between 5% and 6% as investors are focusing closely on financial stocks that have international exposure. Among investment banks, Goldman has a lot of exposure to international markets, with a sizable London office. The Brexit vote not only threatens to destabilize financial markets generally but also could lead financial companies in Europe to reconsider their presence in London, and that could be particularly disruptive to the financial infrastructure that Goldman has set up there. The investment bank has managed to find ways to profit from adversity in the past, and that might be a long-term saving grace for the company. In the near-term, though, Goldman will be among the more volatile stocks in the financial sector in the wake of the Brexit vote.

Freeport-McMoran swoons as commodities get hit

Freeport-McMoRan traded down almost 6% as the copper and energy producer took a double hit in its business. Crude oil prices fell sharply after the vote, falling around 4% to hit the $48 per barrel level, and some fear that the recent gains in crude prices could reverse themselves if macroeconomic uncertainty leads to weaker demand for energy products. At the same time, copper prices fell more than 3% in the wake of the vote, and as one of the world's largest copper producers, Freeport-McMoRan also has substantial exposure to the mined commodities sector. Freeport's gold mining business might get a bit of a lift from soaring gold prices today, but it wasn't enough to prevent a big downdraft in the shares in pre-market trading.

Finally, PPL was down more than 5%. The utility company that was once known as Pennsylvania Power & Light seems like an unlikely candidate for a big down move stemming from an event across the Atlantic, but PPL also has extensive operations in the U.K., and investors worry that the company's Central Networks utility unit in Great Britain could suffer as a result of the vote. Big 5% moves are almost unheard of for utilities, so the drop could come as a big surprise to dividend investors who hold the stock primarily for the company's dividend yield of nearly 4%.

Many of the stocks falling in Friday morning trade could easily bounce back if the fears about Brexit turn out to be overblown. For now, though, shareholders need to be prepared for volatility and uncertainty to have a major short-term impact on their holdings.

Dan Caplinger has no position in any stocks mentioned. The Motley Fool owns shares of Freeport-McMoRan Copper and Gold. We Fools may not all hold the same opinions, but we all believe that considering a diverse range of insights makes us better investors. The Motley Fool has a disclosure policy.

How Has Goldman Sachs Stock Soared 53% This Year, But Still Costs Only $1?

Is It Time to Buy the Dow's 3 Worst-Performing September Stocks?

Could a Financial Robo-Advisor Be Right for You?
405%