Wal-Mart (NYSE:WMT) is one of the most renowned dividend stocks in the market, and for solid reasons, since the retail juggernaut has an impeccable track record of dividend payments over the decades. Wal-Mart paid its first dividend in 1974, and it has raised its dividend every year since then, proving that the business is strong enough to reward investors with consistently growing cash flows through all kinds of scenarios.

However, if you're looking for a retailer with an equally solid trajectory of dividend payments, a higher dividend yield, and stronger potential for dividend growth in the future, then Target (NYSE:TGT) looks like a superior choice.

When it comes to dividend history, Target doesn't have many reasons to envy Wal-Mart. Target paid its first dividend in October of 1967, and it has delivered uninterrupted dividends for 196 quarters in a row since then. As for dividend growth, Target has accumulated 45 consecutive years of consistently growing dividends.

Importantly, Target has materially outperformed Wal-Mart in terms of dividend growth over the middle term. In the last five years, Target has doubled its dividend, from $0.30 quarterly per share to $0.60. Wal-Mart, on the other hand, has increased dividends by a more modest 40% in the same period, from $0.365 to $0.50 quarterly. 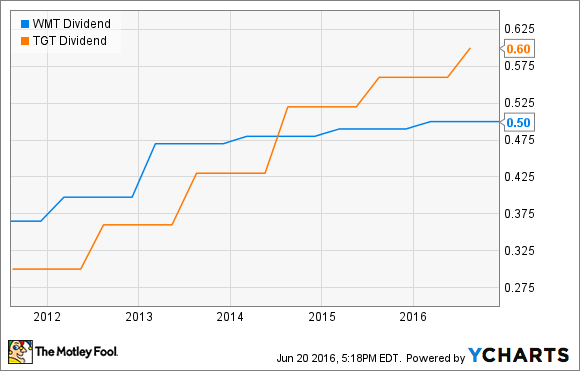 There is no reversal in sight in dividend growth trends -- the last dividend increase from Target was a vigorous 7.1% announced on June 8, while Wal-Mart raised quarterly dividends by $0.01 per share in February, an increase of 2%.

Looking at dividend yields, Target is also ahead of Wal-Mart. At current prices, Target's stock yields 3.5%, while Wal-Mart yields 2.8%.

Dividend investing is about more than dividend history and yield; it's of the utmost importance to consider a company's ability to sustain dividend growth in the future. Wall Street analysts expect Target to make $5.14 in earnings per share during the current fiscal year, which puts the dividend payout ratio at a safe 47% versus earnings forecasts. As for Wal-Mart, analysts are forecasting $4.27 in earnings per share this fiscal year, so the dividend payout ratio is also 47% versus earnings expectations.

In a nutshell, both Wal-Mart and Target offer conservatively low dividend payout ratios, but Target is materially outperforming Wal-Mart in terms of dividend growth, and it also pays a moderately higher dividend yield.

Why Target is outperforming Wal-Mart

Dividends don't come out of thin air, of course. A company needs to produce growing earnings and cash flows in order to reward investors with higher dividends. Besides, a company's dividend payment policy says a lot about the level of confidence management has in the business. If management believes the future looks good, it will be more inclined to distribute generous amounts of cash to shareholders. On the other hand, if the outlook for earnings is uncertain, the company may want to protect financial resources by increasing dividends at a slower rate.

The retail industry has always been particularly challenging, and things are tougher than ever for companies nowadays. Customer demand in the sector is weak, and the online retail revolution is putting additional pressure on traditional brick-and-mortar stores.

In this context, Target is producing lackluster sales growth, but the company is rapidly expanding its online presence, and profit margins remain healthy. It delivered a 1.2% increase in comparable-store sales last quarter, driven by growth in both traffic and the average ticket. Gross profit margin increased from 30.4% of sales to 30.9%, and adjusted earnings per share grew by 16.5% year over year.

The e-commerce business is performing quite well: Target reported a 23% increase in comparable digital channel sales during the quarter. In addition, comparable sales in the company's signature categories -- style, baby, kids, and wellness -- grew more than three times as fast as the company average, driving improving profitability for Target.

Wal-Mart is investing in higher salaries and technology to improve the customer experience, and this is hurting profit margins. Total revenue during the first quarter of fiscal 2017 grew 0.9%, while constant currency sales at Wal-Mart U.S. increased 1%. Sales growth has been improving over the last several quarters, and Wal-Mart has produced positive comparable sales numbers in the U.S. over the last seven quarters in a row, but nevertheless, earnings are still moving in the wrong direction.

Total operating income declined 7.1% last quarter, and net income contracted by 7.8%. Share buybacks are reducing the amount of shares outstanding, but earnings per share still declined by 4.9% during the period. Importantly, Wal-Mart is considerably behind Target in e-commerce -- global e-commerce sales increased by a disappointing 7% during the quarter.

Both Wal-Mart and Target are solid and reliable dividend stocks. However, Target is doing better than Wal-Mart in key areas such as profitability and online growth, and chances are it will deliver superior dividend growth in the years ahead. All things considered, Target looks like a better purchase for investors shopping for the best dividend stocks in the retail sector.