Shares of Viacom (NASDAQ: VIA) (NASDAQ:VIAB) have plunged 35% over the past 12 months due to the media giant's disappointing sales growth, cord cutting concerns, an ugly succession battle, and unclear plans for the future of Paramount Studios. But that big decline has reduced Viacom's multiples to very low levels and boosted its dividend yield to historic highs this year. Should value-seeking investors give Viacom a chance, or is this a value trap destined to head lower?

What happened to Viacom?

Viacom's core cable networks -- MTV, VH1, Nickelodeon, Comedy Central, and BET -- lack hit programs to compete against top-rated shows like AMC Networks' The Walking Dead and Time Warner's Game of Thrones on HBO. Nick-at-Nite is Viacom's most popular network, but its average number of viewers was less than a million at the end of 2015. By comparison, AMC had an average audience 3.9 million viewers for all its original series in 2015.

But is Viacom now cheap?

Viacom currently trades at just 8 times earnings, which is much lower than Disney's P/E of 18, Time Warner's P/E of 15, and the industry average of 23 for diversified entertainment companies. That low multiple, and the possibility of a management shakeup and turnaround, convinced activist investor Eric Jackson of SpringOwl Management to take a stake in the company.

But analysts only expect Viacom to grow its annual earnings by 4% over the next five years, which gives it a 5-year PEG ratio of 2.3. By that measure, Viacom isn't cheap, since a PEG ratio under 1 is considered undervalued. Disney and Time Warner are cheaper relative to their earnings growth potential, with respective PEG ratios of 1.6 and 0.9. 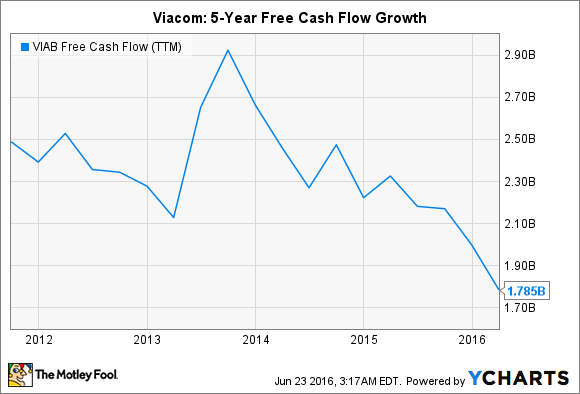 The biggest problem with Viacom is that no one knows where the company is headed. Former Viacom and CBS (NASDAQ:VIAC) executive chairman Sumner Redstone, whose family owns an 80% stake in both companies through his holding company National Amusements, are trying to oust Viacom CEO Philippe Dauman over his proposed sale of a stake in Paramount Pictures. Eric Jackson has also called for Dauman's resignation, stating that "Viacom management has underperformed for years with no accountability," and that the company was "creatively bankrupt."

Dauman claims that the 93-year old Redstone is incapacitated, and that his daughter Shari Redstone is using him to "seize control" of Viacom and CBS. Dauman believes that selling a stake in Paramount to a partner with more digital expertise could "provide important benefits" to the company, and that proceeds from the sale could be used for strategic acquisitions, buybacks, or dividends.

It's unclear which outcome would be better for shareholders. Paramount has been consistently unprofitable over the past few quarters, but simply selling a stake to the highest bidder could just be a short-term fix to temporarily boost cash flows. Handing control to the Redstones could result in a merger with CBS (NYSE: CBS), which it spun off from in 2005. While that move might eliminate redundancies at both companies, it could also complicate both companies' businesses with additional layers of management.

The verdict: Ignore Viacom for now

Viacom might look like a fundamentally cheap stock with a decent dividend, but a closer look reveals a rudderless company which is sailing into cutthroat seas. Therefore, investors are better off ignoring Viacom until it can get its act together and start focusing on long-term growth.

Is Viacom, Inc. Getting Too Cheap To Ignore? @themotleyfool #stocks $VIAB $DIS $VIAC Next Article
Current