The home equity line of credit seemingly exists only in the history books.

Bank balance sheets have exploded since the Great Financial Crisis, but one relic of the housing crisis isn't getting much love from the industry. That's the home equity loan -- more specifically, the home equity line of credit (HELOC).

In the years leading up to the financial crisis, home equity lines of credit were the new credit card. Banks engaged in this riskier form of lending to earn higher returns on their assets. And Americans enthusiastically borrowed against their homes as they rose in value.

From the turn of the new millennium to a peak in 2009, HELOC balances soared from just $105 billion to more than $611 billion, growing at a compounded rate of 20.5% for nearly 10 full years. In retrospect, it was, of course, a massive warning sign that the American homeowner, and the American banking system, truly believed that home prices could only go in one direction -- up. 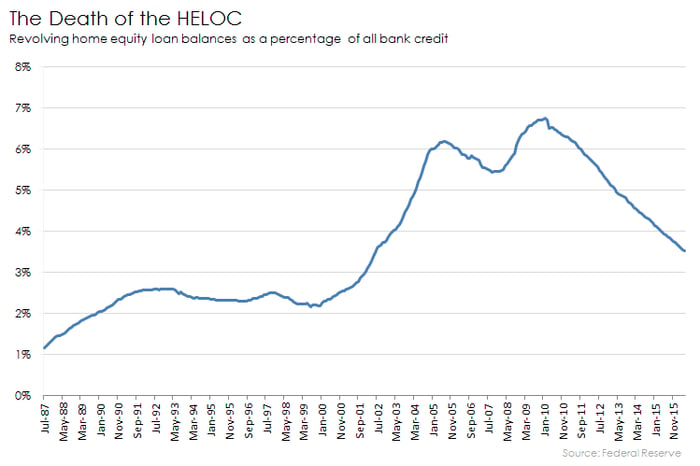 It's not just that the revolving home equity loan has been surpassed by other forms of lending. In fact, since the Financial Crisis, the trend in revolving balances has been down in virtually every single month. Revolving debt secured by homes now rests at just $423 billion.

Why balances are falling

Part of the trend toward falling balances is due to the product's natural evolution. Revolving lines typically allow borrowers to treat their loan like something of a credit card for the first 10 years. After that period passes, loans convert into more-traditional amortizing loans. Balances can go up or down during the first 10 years, but about 10 years after issuance, balances can only go down, as borrowers make required payments on their loans.

The Office of the Comptroller of the Currency (OCC) estimated that about 60% of pre-crisis balances would begin their amortization period in 2014 to 2017. This became a concern in 2013, when Bank of America (BAC 0.31%) disclosed that 9% of its home equity lines of credit that converted to amortizing loans were no longer performing.

Today, the risks remain relatively small. Bank of America, for example, carries about $66.1 billion in home equity loans. This is a mere fraction of its $2.1 trillion balance sheet.

As a result of the scars endured by banks during the financial crisis, it seems likely that it may take years before banks and homeowners become comfortable with the almost-forgotten HELOC.

Jordan Wathen has no position in any stocks mentioned. The Motley Fool recommends Bank of America. We Fools may not all hold the same opinions, but we all believe that considering a diverse range of insights makes us better investors. The Motley Fool has a disclosure policy.

Why Investors Cashed Out of NBT Bancorp This Week

Why Axos Financial Stock Is Up Today
401%