I love Twitter (NYSE:TWTR). When I wake up every morning, the first thing I look at is the baby monitor to make sure my daughter is still in the crib. The second is Twitter.

I use Twitter to follow the news, my sports teams, and people I admire in the investment industry. Twitter allows me to communicate with people I would probably not have any chance of reaching without it. For example, I was once able to obtain some housing data directly from the chief economist at Zillow by going through its CEO, Spencer Rascoff. Twitter is also a great place to trade banter with analysts about stocks I like but on which I would like to seek out conflicting opinions.

Twitter is one of the most influential companies of my time. It has been the platform of choice to give voice to people of regimes of repression. NASA used it to announce that it found ice on Mars. Former Major League Baseball star Jose Canseco used it to show the finger he lost because he shot himself.

I love Twitter. Yet I do not own the stock and don't plan on buying it anytime soon. Here's why.

In the book Hatching Twitter: A True Story of Money, Power, Friendship, and Betrayal, author Nick Bilton highlighted the power struggle and eventual unraveling of the partnership among the four founders of Twitter. I usually look at books like Bilton's with some skepticism, but with top management in a constant state of chaos, its difficult to discount his story.

On June 6, news came out that Jeff Siebert was leaving his post as head of Twitter's product. Twitter's senior engineering director, Ed Ho, is taking over the position on an interim basis. He will be the fifth person to run Twitter's product line since early 2014.

The turnover doesn't just apply to the head of product. Here is a timeline of major management changes in the past couple of years:

As you can imagine, management turnover and the lack of consistency in operations are taking a toll on Twitter employees. Twitter's Glassdoor rating, while still positive, has fallen considerably in recent years. 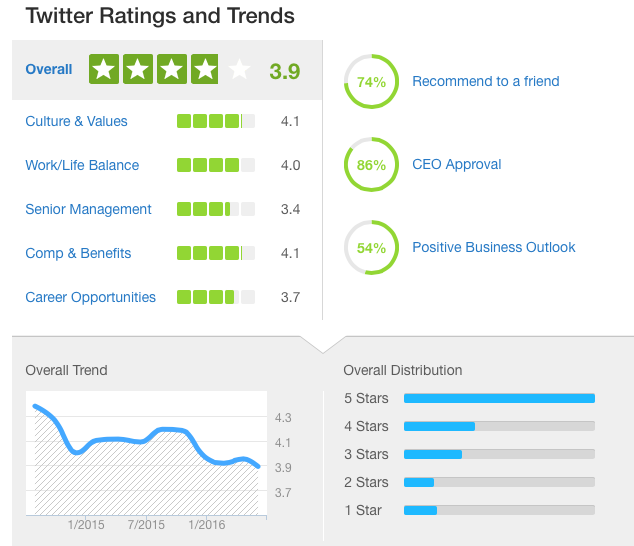 Not only is there turnover among the executive team, but the CEO position has also been like a game of hot potato. Dorsey, the current CEO, originally stepped down from that post in October 2008. He replaced Costolo, who had the longest reign as chief, at five years. Dorsey was originally replaced by co-founder Evan Williams, who himself stepped down for Costolo in October 2010.

Dorsey is also the CEO of Square (NYSE:SQ), a credit card processing company that he also co-founded. Square's headquarters are right across the street from Twitter headquarters in San Francisco. The role of CEO at multiple companies has worked for the likes of Elon Musk and Jeff Bezos, who run private companies outside Tesla Motors and Amazon.com, respectively. However, unlike Musk and Bezos, Dorsey hasn't shown the same success. Square stock is down 30% since its IPO last winter, while Twitter is down 67% since Dorsey took the reins back at Twitter.

In its fourth quarter earnings call, Dorsey laid out the clearest vision to date for Twitter. Dorsey noted that the global leadership was aligned with focusing on what Twitter does best which is being a "live" platform where users can receive breaking news and commentary on sports, entertainment, and everyday topics. Dorsey looks to deliver on the newly founded focus with five priorities in 2016:

Six months into the year is too early to see if Twitter is successful in executing on its vision. However, without management stability, the probability of executing on that vision will be slim to none.

Dorsey acknowledged Twitter's shortcomings at Recode's technology conference, staying that messaging on Snapchat is "very modern," while Twitter can be alienating and confusing.

Investors are also beginning to lose faith in the company as a hot tech stock. With Twitter shares down 54% over the last year, many investors are relying on a buyout of the company to help them recover their losses.

I could be wrong about Twitter. The potential for the platform is incredible. It has a global reach with power-users whose life would be altered negatively without the platform. The company also signed a contract with the NFL that will allow it to stream 10 Thursday Night Football games. Every time you see an ampersand or hashtag, Twitter is receiving free advertising, yet the company hasn't been able to turn that advertising into user growth and profitability.

Maybe the recent management turnover will allow Dorsey to bring in the talent he wants and they can turn it around. However, history is not on its side. For now, Twitter reminds me of a teenage athlete who can get a scholarship to any Division 1 university but can't muster up a 2.0 GPA to graduate high school. Investors can only hope it's just a matter of time before the company can start reaching its full potential.