If you've ever watched a stock you were about to purchase leap in value in a short amount of time, keeping you sidelined, I feel for you, earnest investor. OK, to be honest, I feel for myself every time this happens.

McDonald's Corporation (NYSE:MCD) well illustrates this phenomenon. After a quick 30%-plus total return in 2015, the company is pricier today than it has been in several years, complicating a current "buy" decision.

Its trailing-12-month price to earnings (P/E) ratio, which floated around 17 in the three years preceding 2015, now sits above 23. As the company continues to turn in quarterly earnings which support its turnaround, it's hard to shake the suspicion that most of the good news is already priced into the stock.

Is there a better metric than the broad P/E ratio investors can use to gauge whether McDonald's has become too expensive? In this two-part series, we'll look at additional ways to bring more nuance to the valuation of McDonald's, with some background on why it's become more difficult to value the fast-food behemoth as of late.

McDonald's is a megabusiness in transition

In the past few years, McDonald's has flipped its capital structure, turning a relatively unencumbered balance sheet into one laden with debt. The impetus for massive borrowings is a promise management made to return $30 billion to shareholders over the three-year period ending in 2016. These returns will come in the form of McDonald's dividends, yielding nearly 3%, and share repurchases.

Management recently stated that the company has completed roughly two-thirds of this commitment. McDonald's will need to spend another $9.7 billion in the last three quarters of this year to meet its goal.

If operating cash flow and capital expenditure trends remain close to normal, then the company will need to finance at least half of this $9.7 billion with additional debt. The company's debt has already soared roughly 65% since the beginning of 2014, to $23.4 billion as of the end of the first quarter of 2016.

Complicating matters is a shift in business model, as McDonald's evolves from a company that currently operates nearly 20% of its own restaurants to one that in the future will be 95% franchised.

This evolution will ultimately reduce capital expenditures for McDonald's and ideally improve profits. Future earnings will be based on the difference between the royalties the company collects from its franchisees, and the various corporate expenditures it undertakes to support them.

Investors can make sense of this rapidly changing company by setting aside the P/E ratio and examining the relationship between EV, or enterprise value, and EBITDA, or earnings before interest, taxes, depreciation, and amortization.

Enterprise value, which is the sum of market capitalization and debt a corporation owes (net of cash it has on hand), gives investors a way to look at a business from the perspective of an acquiring owner. After all, when you buy a company, you obtain its assets, but you also typically assume its liabilities.

EBITDA, a type of adjusted earnings, serves as a proxy for a company's cash flow, as it removes the non-cash items of interest, taxes, depreciation, and amortization from the income statement.

So, when valuing McDonald's by the EV-to-EBITDA ratio (i.e., EV divided by EBITDA), you're essentially seeking the relationship between the total value of the company, including debt, and the cash it generates.

A widely employed metric, EV/EBITDA is especially helpful in comparing valuations of companies with widely different capital structures. This is because the ratio is capital-structure neutral -- it adds debt in the numerator and subtracts interest expense in the denominator, neutralizing differences in debt levels and the cost of borrowing between disparate companies. 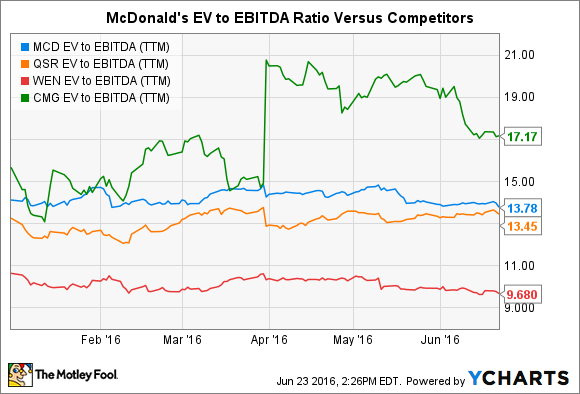 Compared to a sample of pertinent competitors, McDonald's isn't overly expensive on the basis of total value to adjusted earnings. Its valuation is in the middle of the range between smaller competitor Wendy's, and fast-casual phenomenon Chipotle Mexican Grill, which, despite recent food safety issues, still commands a bit of an earnings premium in the marketplace.

EV to EBITDA gives us perspective that even after a huge price run-up last year, McDonald's still trades in a buyable range. But one thing this metric doesn't address is the company's earnings power relative to its newly leveraged balance sheet. This will be an important concept to grasp in coming years, given the company's spike in indebtedness. In the second article in this series, we review a metric that addresses this very issue.