Charles Schwab mutual funds offer a compelling value proposition of low expenses (including no redemption fee), low minimum investments (just $1), and in some cases, market-beating returns. My aim is to make your mutual fund comparison shopping easier with a table of its best funds, and a brief case for each fund in the article below.

It's hard to go wrong with a low-cost fund that tracks the S&P 500 Index. The S&P 500 is the index when it comes to American stocks, as it consists of about 500 stocks that collectively make up about 80% of the American stock market's value.

Charles Schwab's S&P 500 index fund is downright cheap, carrying an annual expense ratio of just 0.03%. That's the cheapest of any S&P 500 tracker, besting the Vanguard's S&P 500 ETF, which carries an expense ratio of 0.04%. Though the difference is negligible for the sums of money the average person has to invest, Charles Schwab is committed to being a leader in fund fees and expenses, as evidenced by the fact it has slashed fees on its index funds time and time again. 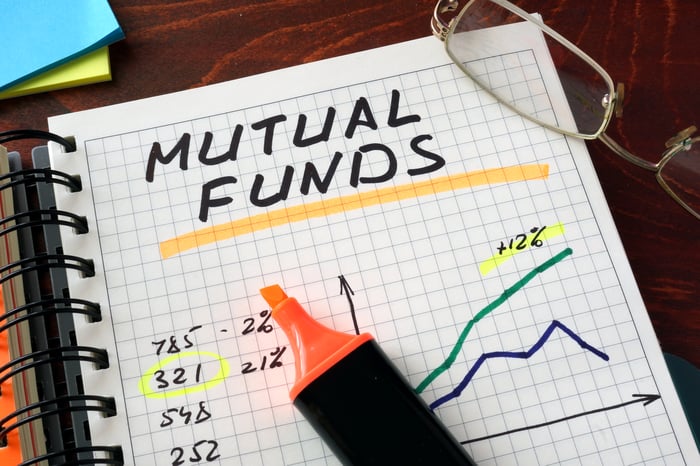 Before discounting the fund for its higher-than-average annual expense ratio of 0.86% per year, consider that this fund is both actively managed and comprised of international holdings. Importantly, active management has served it well, as the fund has achieved its stated goal of outperforming the MSCI EAFE index over the most recent 3- and 5-year period.

Currently holding 195 stocks, this fund is broadly diversified around the world, with Japanese, U.K, and German stocks collectively making up more than half the fund by assets. It's also biased toward large-cap stocks, with so-called "giant-cap" and "large-cap" stocks making up about 40% and 37% of assets, respectively.

There's just one warning: This fund probably isn't the ideal fund to hold outside a retirement account. That's because its managers are very active, turning over 90% of the portfolio in the most recent year. Hold it in a tax-deferred account to avoid tax drag, as managers who buy and sell frequently generate a lot of taxable capital gains, which weighs on after-tax returns.

Own just about every stock on American exchanges, and pay just 0.03% each year to do it. That's the pitch for this index fund, which tracks the Total Stock Market Index.

Comprised of more than 2,400 stocks, this fund invests in every "investable" company on American markets. For practical purposes, "investable" means companies that are at least large enough that this fund can buy and sell without moving the market when it rebalances its portfolio.

In truth, its performance won't differ all that much from an S&P 500 index fund, except for slight variation due to the fact it holds small and midcap stocks -- 10% of assets in total -- that you won't get from the predominate index.

This fund is downright expensive at first glance, carrying an annual expense ratio of 1.10% -- a tough hill to climb to achieve market-beating returns. Alas, its five-year performance has beaten that of the Russell 2000, performance that can be attributed to the current management team, which took the helm in 2012.

It's also topped the performance of a less-expensive fundamental index fund, the Schwab Fundamental US Small Company Index Fund, which carries an annual expense ratio of 0.25%.

Holding more than 300 stocks, the fund is certainly diversified. Information technology, healthcare, and industrial stocks lead its sector weights at 19%, 17%, and 17% of assets, respectively. Like Schwab's international fund, this fund will likely create higher tax burdens due to its portfolio turnover ratio of 85% over the last year, which suggests it is best owned in a tax-deferred retirement account.

If you're not too keen on banking on Schwab's ability to pick small-cap stocks, consider taking the index. This fund simply tracks the Russell 2000 index of small-cap stocks, holding about 1,980 companies at the time of writing.

The advantage to this fund is lower costs -- expense ratio of 0.05% -- and lower turnover -- 17% in the past year -- compared to actively managed alternatives. It's as simple as it gets -- a diversified small-cap stock fund at a very low price.

Investors should give Charles Schwab a lot of credit for offering an impressive list of index funds that carry industry-leading expense ratios.