Stocks were on pace for solid gains last week -- until the Brexit vote sent the Dow Jones Industrial Average (DJINDICES:^DJI) and S&P 500 (SNPINDEX:^GSPC) tumbling by more than 3% on Friday. As a result, both indexes slipped back into negative territory for 2016, but only by the smallest of margins: 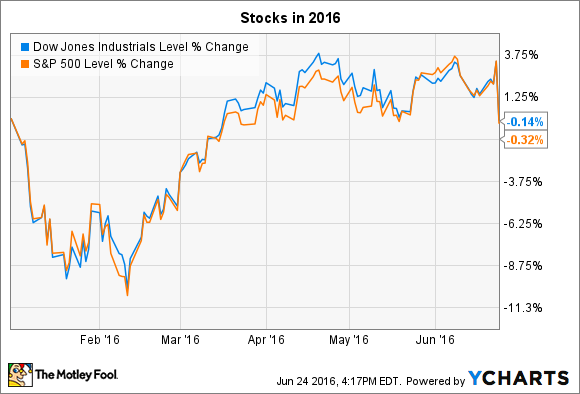 Looking ahead, a few stocks could make big moves this week. These include Nike (NYSE:NKE), General Mills (NYSE:GIS) and Constellation Brands (NYSE:STZ).

Sports-apparel titan Nike posts earnings results on Tuesday to close out its fiscal 2016. Shares have slipped this year as investors worried about a slowdown in growth: Revenue is up 6% over the past nine months compared to a 10% boost for all of fiscal 2015. At its last quarterly check-in, Nike revealed strong profit growth, but revenue gains didn't meet consensus estimates.

This week, Wall Street projects a 6% sales uptick for fiscal Q4. Earnings should dip slightly, but management's guidance calls for profitability to tick higher. Yet what's most likely to propel the stock after earnings is Nike's forecast for the coming year.

Chief Financial Officer Andy Campion told investors in March that, while planning was still underway, profit growth will likely be weak during the first half of fiscal 2017, before spiking in the third and fourth quarters. If that official forecast rattles Wall Street on Tuesday, long-term investors may get a chance to pick up shares of this highly profitable business at a discount.

If consensus estimates are right, General Mills will post a double-digit sales decline for its fiscal fourth quarter this week. However, things aren't nearly as bad as that result would suggest.

Three big, but short-term issues are pinching the snack titan's reported figures right now: Foreign currency swings, the sale of the Green Giant brand, and a quirk of the calendar that adds an extra week to the prior-year period. Strip out those items, and you're left with basically flat sales and profit results.

Meanwhile, investors will be looking for cost cuts and falling commodity prices to combine to push earnings higher. We're already seeing evidence of that happening: Net profit margin is up to 10% of sales over the past nine months from 8% in the prior-year period. As usual, General Mills' food and marketing innovations will be key to sustaining its growth, as new and updated products like gluten-free Cheerios and Yoplait Greek whips yogurt lead the way.

Alcoholic beverage giant Constellation Brands is set to post earnings results before the opening bell on Thursday -- and investors are bubbling with anticipation. The stock is up 30% over the past year, and is sitting near an all-time high ahead of the report.

That optimism is founded in sharply improving business fundamentals. Constellation's profits are soaring as its beer portfolio, anchored by the Modelo and Corona brands, post awesome growth. Sales improved by double digits in the segment last quarter, even as prices rose. As a result, the beer division saw a 24% earnings boost which outpaced the wine business and its 8% uptick.

Constellation is doubling down on beer by bringing new breweries online. The strong profit growth is also adding plenty of financial flexibility to the business. Aside from pouring resources into new breweries, Constellation has made two big acquisitions in the last year, devoted cash to higher share buybacks, and initiated a dividend.

Investors can expect more shareholder-friendly moves like that as long as the healthy sales-growth streak continues.