If you're an investor looking to quickly get up to speed on Union Pacific's (NYSE:UNP) business, these charts can help you do so.

Railroads are a monopolistic industry, and while they compete with other modes of transportation, their nearly irreplaceable assets allow the major railroads to price their services in a way that helps to ensure an adequate return on investment. 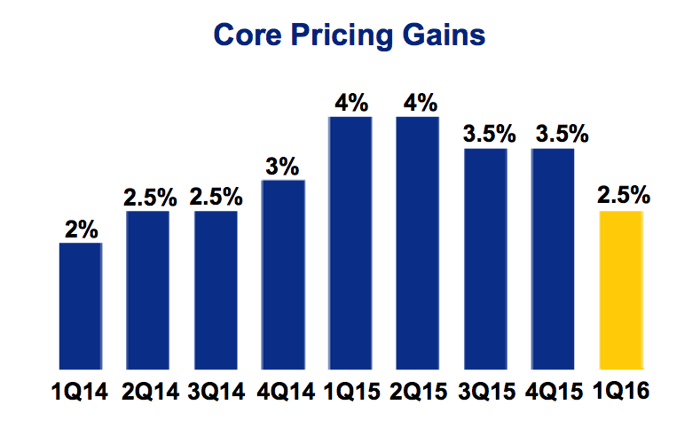 A 2.5% core price increase in the first quarter continued a multi-year trend of solid pricing gains for Union Pacific. The ability to raise prices above inflation reflects the value proposition the railroad offers to its customers, as well as its strong competitive position.

2. Yet price increases have been unable to offset failing demand 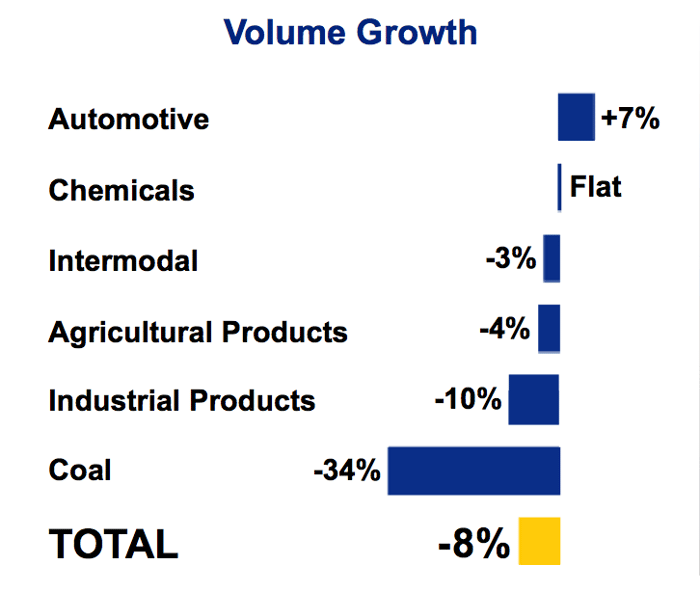 While a rebound in oil prices could spur demand for crude-by-rail and drilling-related shipments, coal demand is likely to remain in secular decline as U.S. energy production shifts to natural gas and renewable-energy sources such as wind and solar in the coming decades. As such, Union Pacific's coal business is likely to remain a drag on its results for the foreseeable future.

3. Management is slashing costs to get back on track

In response to the decline in demand, management is laying off workers and reducing its active locomotive count. 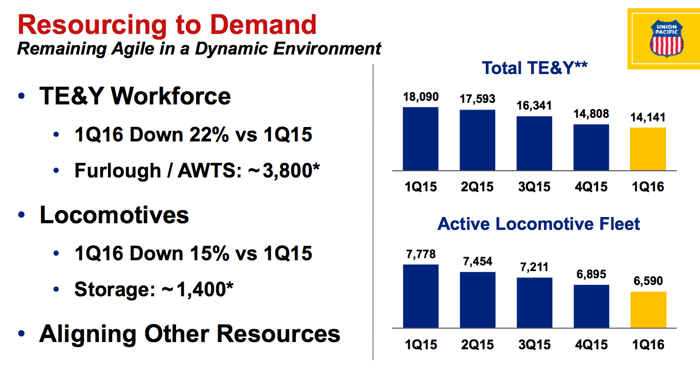 During Union Pacific's earnings conference call, management said the company would continue to adjust its resources and prioritize productivity initiatives to further reduce costs. That's prudent, because the more efficient Union Pacific becomes, the less it will suffer when demand is low, and the better positioned it will be to profit when volumes eventually rebound.

The company's progress in regard to cost-cutting can also be seen its operating ratio -- a key metric defined as operating expenses divided by operating revenues -- which was up only 0.3 percentage points compared with the first quarter of 2015 despite the sharp drop in volume. 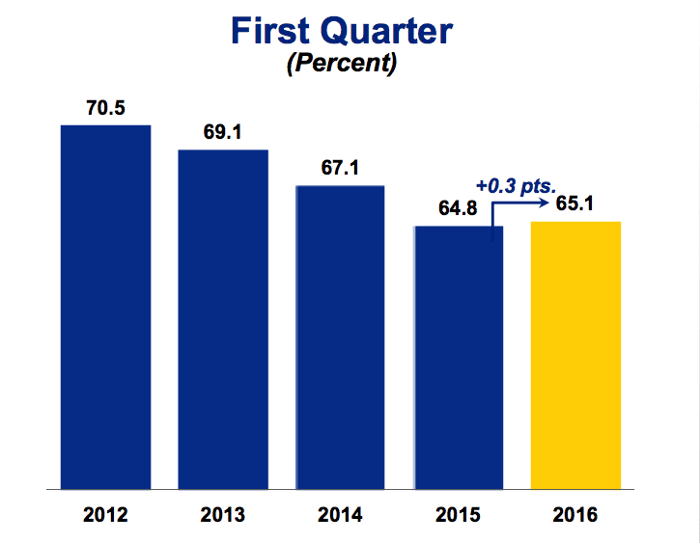 As part of its "55+0" initiative, Union Pacific will be working toward even greater productivity gains as it attempts to drive its operating ratio to 55% from its current level near 65%. In fact, management believes these efforts will not just alleviate short-term earnings pressure caused by lower volumes, but also help to fuel long-term profit growth, cash flow generation, and shareholder returns.

All told, operating and net income declined 15% to $1.7 billion and $979 million, respectively, in the first quarter. Earnings per share, helped somewhat by share buybacks, fell 11% to $1.16. 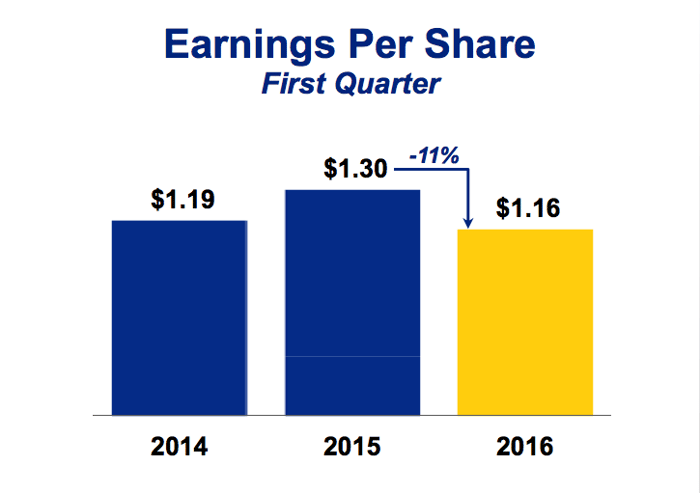 First-quarter cash from operations totaled almost $2.2 billion and was actually up slightly when compared with the first quarter of 2015, mainly because of the timing of tax payments related to bonus depreciation on capital spending. 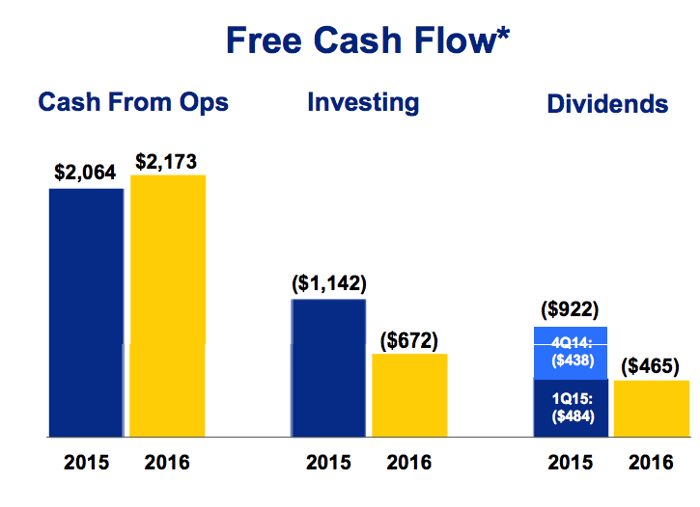 Moreover, as the company tightened the reins on its capital investments, free cash flow rose to $1.5 billion, up from $922 million in the first quarter of 2015.

7. And management is committed to passing on that cash flow to investors

In addition to the $465 million in dividends shown in the previous chart, Union Pacific also returned $713 million to its investors in the form of share buybacks. The railroad repurchased 9.3 million shares the in the first quarter and a total of 289.1 million shares since 2007. 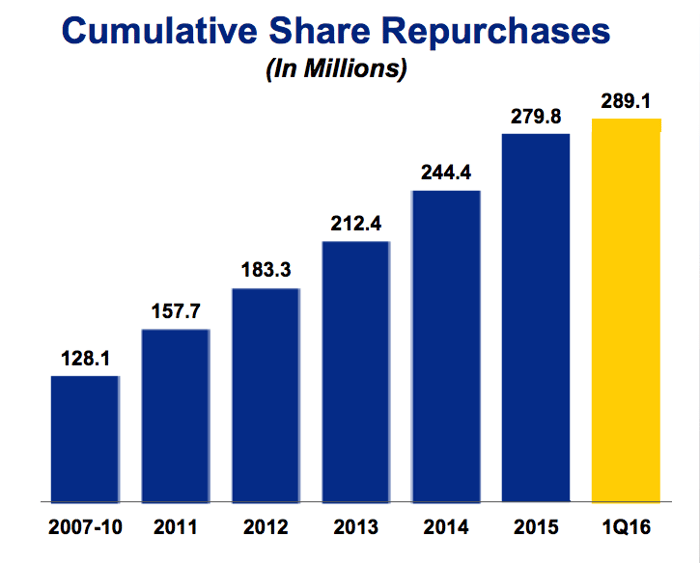 Notably, since initiating its share-buyback program in 2007, Union Pacific has repurchased almost 27% of its outstanding shares. And with an average purchase price of $57.93 (compared with Union Pacific's current stock price near $82), those buybacks have created significant value for the company and its investors.

8. Long-term shareholders have been well rewarded

While Union Pacific's financial results have been volatile over the past year, the company's revenue and earnings have risen steadily when viewed over longer periods of time. Combined with the aforementioned dividends and value-creating share buybacks, this long-term earnings growth has resulted in strong total returns for investors over the past decade. 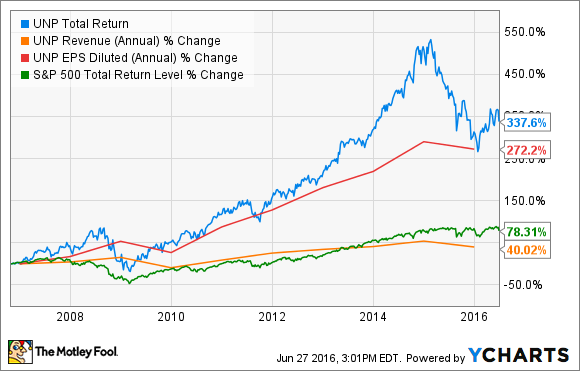 More importantly to today's investor, however, is that railroad remains well positioned to deliver solid returns in the years ahead. Railroads are a vital part of the American economic growth engine, so much so that an investment in Union Pacific is in many ways a wager on the long-term economic future of the United States.

That's a bet that the best investors make, and are rewarded for, time and again.