It's been a rough year to be an investor in Gilead Sciences (NASDAQ:GILD), Celgene (NASDAQ:CELG), or CVS Health (NYSE:CVS). All three of these high-quality healthcare companies started out the year trading for more than $100 per share, but that's no longer the case. Each of them has since reported a disappointing result of one kind or another that has caused traders to push them back down into double-digit territory. 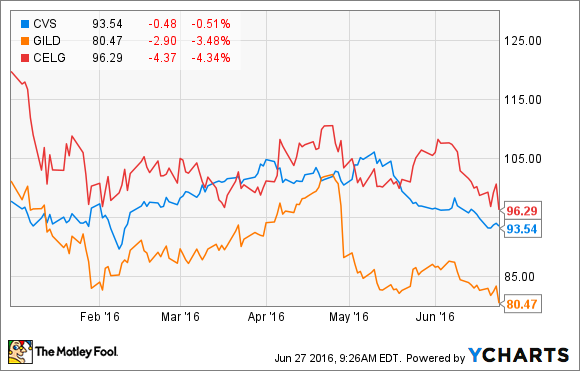 So, what's it going to take for each of these stocks to get back in the market's good graces? Here's what investors will be looking for.

Gilead Sciences' stock has been the biggest loser of this trio this year. Shares have now fallen more than 20% year to date, and it's not hard to figure out why. Traders have reacted harshly to weaker-than-expected sales from the company's hepatitis C franchise, causing them to worry that Gilead's glory days are gone.

What's causing the disappointing results? Gilead is being forced to give pricing concessions because of an increase in competition in the space from the likes of Merck and AbbVie. Payers are now in the driver's seat and are demanding lower prices in exchange for allowing Gilead to maintain its dominant market share. That fact has shareholders worried that Gilead's top line could stagnate or even decline over the next year, and they have priced shares accordingly.

Gilead isn't blind to the market's worries, and there's a catalyst coming later this week that could even help to resolve this situation: The company's next-generation hepatitis C drug is up for an approval decision on June 28. This drug could theoretically be the first pan-genotypic hepatitis C drug on the market, and it could possibly help restore the company's pricing power.

In the meantime, management is plowing nearly all of the company's excess capital into buying back shares. With a dividend of 2.34% on top of that, investors are being rewarded for sitting tight while this company climbs back up above $100.

Bring back the beat & raise

Investors have become accustomed to Celgene blowing past its quarterly earnings and then raising its future forecast. That's been the company's playbook for several years now, so when Celgene reported mixed results last quarter, traders didn't take the news well. Shares are currently down more than 20% year to date.

What went wrong in the report? Everything is still looking rosy for 2016, but traders are squarely focused on 2017 guidance. Celgene now expects next year's sales to land between $12.7 billion to $13 billion, and for earnings to land within the range of $6.75 to $7.00. Unfortunately, that's quite a bit lower than its prior 2017 outlook, which called for $13 billion to $14 billion in sales and $7.25 in EPS.

Why the shortfall? Blame it on the company's cancer drug, Abraxane. First-quarter growth of this drug was a meager 1%, and sales actually dropped 10% in the U.S. Celgene is blaming the results on an increase in competition and is now dialing back its future expectations accordingly.

What can cure the company's ailing share price? I think it's as simple as restoring the market's faith that Celgene is still on track to hit its long-term guidance of more than $21 billion in net product sales by 2020. If true, then the company should show more than $13 in earnings per share at the time, which represents double-digit annualized growth between now and then.

Thankfully, the company has a slew of drugs not named Abraxane in its lineup that should help it get there, including current and future blockbuster drugs like Revlimid, Pomalyst, and Otezla, plus a pipeline packed with potential.

If Celgene can show in its next few earnings reports that waning sales of Abraxane won't hinder its long-term growth plans, I could easily see shares cross above the $100 mark.

Of the three stocks listed here, CVS Health's stock price decline is one I find most perplexing. Its most recent earnings report looked solid, with revenue jumping by 18.9% and adjusted earnings per share coming in ahead of guidance. The company gained market share in its two main business segments, and it even bought back a healthy amount of stock. So, why are shares down year to date?

My hunch is that investors are worried the company won't be able to translate its strong revenue growth into sustained profitability. That argument might hold water because the company showed significant margin erosions during its first quarter, which is a big reason the 18.9% jump in revenue only translated into a 1% increase in adjusted net income. If that trend persists for years to come, I would have a hard time getting excited about owning shares.

Investors should remember that management recently reaffirmed its 2016 earnings growth guidance of at least 11%. That implies that its margins will bounce back sharply in the back half of the year. That should restore the market's faith in this company's long-term growth plans, and I'd wager it should be enough to push shares back above the $100 mark.