It's safe to say CVS Health (NYSE:CVS) had a pretty darn good 2015 overall thanks to growth in its retail store footprint and the continued success of its pharmacy benefit manager business. Analysts are currently projecting that the company's 2015 sales will wind up showing 9.8% growth over 2014 results, with earnings per share growing at an even faster rate of 17%. Better yet, the odds look good that CVS Health will continue to grow over the coming year as its strategic moves begin to pay off.

Growth drivers
CVS Health breaks down its business into two main operating segments: Retail/Long Term Care and Pharmacy Services. With 10,000 baby boomers turning 65 each day, both of these segments look poised for significant growth over the coming years.

Thanks to the recent closing of the $1.9 billion acquisition of Target's (NYSE:TGT) pharmacy and clinic businesses, CVS now counts more than 9,500 retail stores in its empire, with more than 1,100 of these stores also offering walk-in medical services under the MinuteClinic name. The Target deal significantly expanded the company's footprint from the 7,800 retail stores and 900 clinics it owned at the end of 2014, and over the next two years the company plans on adding another 400 MinuteClinics to its network. Even then, there appears to be plenty of room left for MinuteClinic to expand. 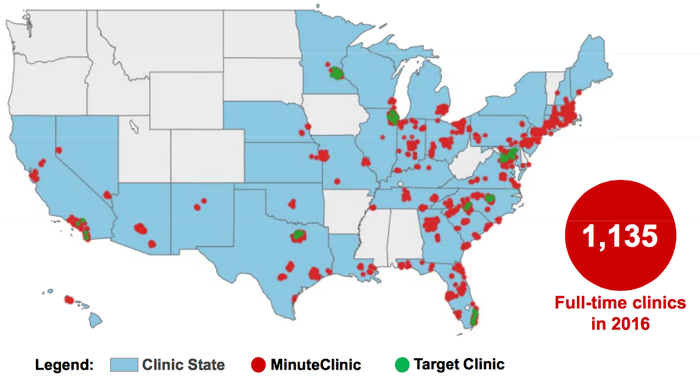 Another promising growth opportunity is long-term-care. CVS made a big push into this industry in 2015 with its $12.9 billion acquisition of Omnicare, a leading provider of pharmacy services to both the assisted-living and long-term-care facility markets. The acquisition should prove to be a significant growth opportunity over the coming years as the graying of the American population continues.

While store growth will likely slow in 2016 as CVS digests the Target and Omnicare acquisitions, management believes that the retail/long-term-care part of its business should be able to grow by double digits in 2016.

The outlook seems equally rosy for the company's pharmacy benefit management business.  CVS added an impressive $11.5 billion worth of net new business to the division during the year. Better yet, not only has CVS Health has done a great job of winning its fair share of new business, but it is equally adept at holding on to the customers that are already in its network.

In 2015, the company retained 98% of its pharmacy benefit management clients, which shows just how much value businesses get from partnering with CVS Health to reduce their pharmacy costs. In total, the company estimates that it saved its customers more than $6.4 billion in incremental costs from 2012 through 2016 through its formulary management strategies. Management believes this segment should also show double-digit growth in 2016.

When adding these two segments together, CVS Health is expecting to grow its adjusted earnings per share to between $5.73 to $5.88 per share, which represents a solid year-over-year growth rate of 11.25% to 14.25%.

Rewarding shareholders
CVS Health's huge profitability gives it a lot of capital to work with, and the company has never been shy about sharing its riches with shareholders. Over the past five years, the company has been very active in the open market repurchasing its shares, even while it has meaningfully increased its dividend. 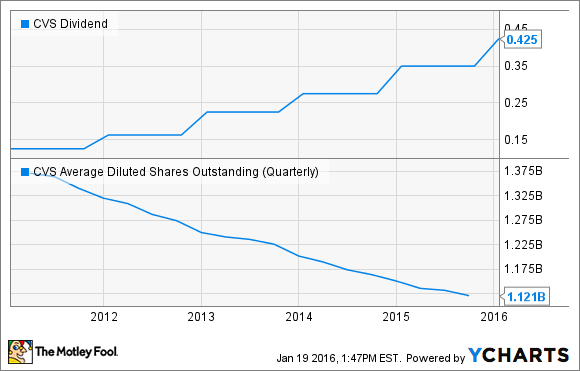 2016 looks like it should be more of the same. The company announced that it will be raising its dividend by 21%, and it expects to payout $1.70 per share. The company also has plans to repurchase roughly $4 billion of its stock during the year. With a current market cap hovering around $105 billion, that move could reduce the number of shares outstanding by another 4%.

A good year ahead
If the company's projections prove to be accurate, than investors in CVS Health look poised to have a prosperous year. With shares currently trading for less than 17 times their 2016 earnings estimates and offering up a dividend yield of 1.8%, I think this company deserves a spot on every healthcare-focused investor's radar.