Daniel Miller, Sean Williams, and George Budwell
(TMFTwoCoins)
Author Bio
As a Motley Fool Industrial Specialist, I use my marketing and business background in the automotive industry to evaluate major automakers and other large industrial corporations. Follow me on twitter for tweets about stocks, cars, sports, and anything I find amusing. Follow @DanielMillerTMF

There's no question that investing can be a great way to build wealth, but it can also be exciting to own the next big thing before anyone realizes it -- hey, who wouldn't want to brag about that? That's where growth stocks come into play. These are companies whose shares carry higher risk, but can also offer a steep reward for investors who chose well and get on board at the right time. With that said, here are three of our analysts and three growth stocks they find intriguing: Skechers (NYSE:SKX), Infinera (NASDAQ:INFN), and Trevena (NASDAQ:TRVN).

Sean Williams: When it comes to growth stocks that have my attention, Skechers is high on the list. The company has delivered an incredible brand transformation over the past five years -- you might recall the company getting into trouble earlier this decade for making false claims about its Shape-Ups shoes. It's done so by relying on store expansion, affordability, and innovation to drive its results.

Expansion has been a driving force to Skechers' growing sales. The company opened 87 stores during the first quarter, and it added another 17 during the three weeks of April prior to announcing its Q1 results, putting its total store count at 1,414. It should be noted that 1,017 of these stores are in international markets, as Skechers attempts to become a major global shoe brand. Overall, net sales in Q1 reached a record $978.8 million, a 27% increase from the prior-year quarter, while company-owned retail stores generated 9.8% same-store sales growth.

Skechers' focus on affordability and on reaching multiple genres of buyers has also helped it  improve sales and acceptance of the brand. When questioned about the company's long-term growth approach in terms of competing with the likes of Nike (NYSE:NKE) and Adidas, CEO Robert Greenberg noted in an interview with Bloomberg that his company is on pace for more than $1 billion in performance group sales in 2016. From athleisure to dress, Skechers is offering the consumer an innovative product that fits their budget.

Having strong brand ambassadors has helped Skechers, too. Skechers has welcomed retired NFL players Joe Montana and Howie Long, as well as pro golfers Matt Kuchar, Colin Montgomerie, and Belen Mozo, to its ambassador ranks. Musicians Demi Lovato and Meghan Trainor are also on board. Skechers' willingness to go after popular celebrities, and to shuffle new faces in from time to time, has helped create an emotional attachment to the brand with consumers.

Expected to grow its sales by an estimated 67% between 2015 and 2019, while more than doubling its annual EPS to a projected $3.39 by fiscal 2019, Skechers is a growth stock worthy of your consideration.

Daniel Miller: This is likely going to be the year I finally pull the trigger and open a position in Infinera. Essentially, Infinera offers end-to-end solutions for long-haul and metro networks and cloud service providers that enable network operators to support more bandwidth. As trends such as cloud computing and 4K video increase, demand for bandwidth will rise, and demand for Infinera's products should rise with it.

The company's stock price has shed nearly half its value over the past year, yet its top line continues to move higher. 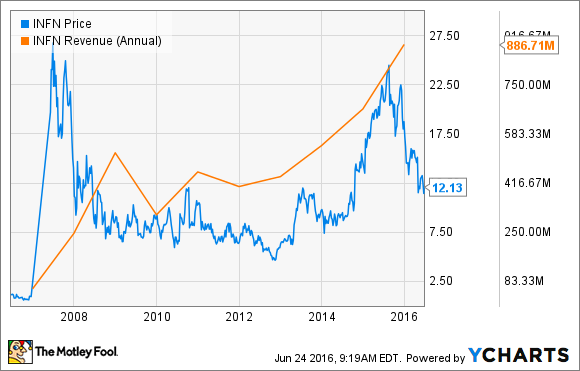 While the most recent quarter isn't shown on that revenue line, revenue jumped 31% to $245 million and gross margins expanded to 50.2%, a 240 basis point increase from the prior year.

The widening gap between the top-line growth and the stock price was apparently enough to entice Infinera CEO Thomas Fallon to increase his holdings by 11.25% in early May. Fallon purchased 100,000 shares of the company's stock for nearly $1.2 million, and two other Infinera executives followed suit, purchasing shares of their own.

One issue that has contributed to Infinera's decline this year was noted by management last quarter: a significant Transmode customer hasn't purchased any products for two quarters. These orders, especially in an industry such as this, can be bumpy and unpredictable.

Partly due to the uncertainty regarding orders from that large customer, management pulled back expectations for the second quarter; but if that customer were to place an order, it could be just the thing to send the rebounding from its 33% decline thus far in 2016. Further, either way, the company's long-term future remains very bright, and revenue growth should recover throughout the back half of 2016.

George Budwell: Under-the-radar biotech Trevena remains one of my favorite speculative growth stocks because of the potentially disruptive nature of its experimental acute pain medicine, oliceridine. The short story is that Trevena recently launched two pivotal stage trials for oliceridine -- one in patients following bunion surgery, and another in patients receiving "tummy tuck" surgery. The company expects to release top-line data from both studies in early 2017, and hopes to file for the drug's regulatory approval with the FDA by the middle of next year.

Why is Trevena such an intriguing growth stock? Put simply, there is a dire need for alternatives to conventional opioids in treating acute pain. Apart from the fact that traditional opiates often fail to provide long-lasting pain relief, they are highly addictive; opioid abuse leads to around 17,000 deaths in the U.S. annually. Making matters worse, many opioids are associated with a host of serious side effects, such as constipation, respiratory depression, and analgesic tolerance.

Trevena is hoping to fill this unmet medical need by developing a moderate to severe pain med (oliceridine) that is more potent than morphine, and comes with fewer unwanted side effects. And so far, the biotech's mid-stage trial data have been extremely encouraging, with the drug generally producing faster pain relief, along with a reduced prevalence of opioid-related adverse events, than morphine. If this pattern holds in the drug's pivotal-stage trials, Trevena could have a new megablockbuster pain medicine on its hands.