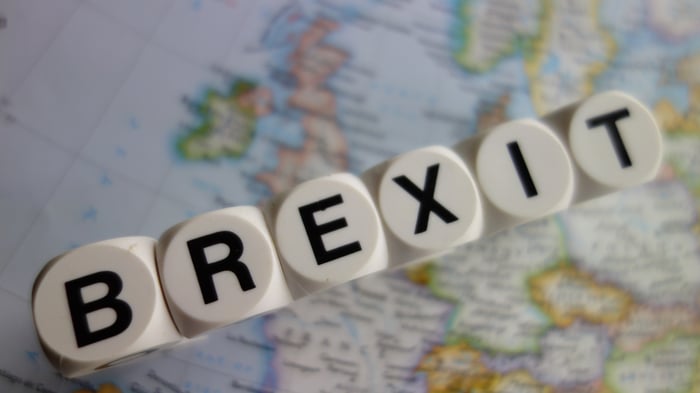 It pays off to take a long-term view to the markets. After all, it's been shown time and time again that investing with a long-term mindset yields greater returns than short-term trading. There can be times, however, when sharp market drops alert investors to risk that's lurking in their portfolios. That's especially true following a major move upward in stock prices, as we've seen in the U.S. since the Great Recession. If Britain's decision to exit the European Union, or Brexit, is taking a larger toll on your portfolio than you expected, it could be because stocks have grown to represent too large a percentage of your portfolio. If that's the case, then it may be time to consider rebalancing your investments.

A refresher on what's happening

Last week, citizens of the United Kingdom voted to remove their country from the European Union, a group of sovereign countries that have agreed to work together under a common governing body.

Historically, countries joined the European Union for many reasons, but among the biggest benefits of membership are free trade and the ability for citizens to easily cross borders.

Recently, rising concerns about the U.K.'s wage gap and immigration from Eastern European and war-torn countries have called into doubt the value of those benefits.

As a result, voters determined by a 52% to 48% vote to go it alone. The Brexit won't officially happen until negotiations with the EU governing body occur, and those negotiations won't begin until the U.K. invokes Article 50 of the Lisbon Treaty, kicking off a two-year time clock for separation.

Rather than invoking Article 50 immediately, Britain's prime minister, David Cameron, a proponent of remaining in the EU, announced he will resign once a successor is picked. His decision makes it unclear when the U.K. will activate Article 50.

Because the U.K.'s separation from the EU raises questions about Europe's economic future and increases the risk that other member countries could follow in the U.K.'s footsteps, the country's decision is having a seismic impact on global stock markets.

A quick look under the hood of the MSCI EAFE Index ETF explains why it has fallen so sharply. 19% of its holdings are in U.K. stocks and the U.K., France, and Germany represent 37% of its assets. Additionally, 24% of its assets are invested in financials, which have been hit particularly hard over uncertainty regarding London's ability to remain the capitol of the European financial market.

It may be a bit lit less clear to investors why the S&P 500 ETF is down, but a quick review of the contagion risk facing big U.S. companies may shed some light on the matter.

If future trade agreements negotiated by the U.K. aren't favorable, or they cause various trade wars, then U.K. GDP and wages could suffer. Similarly, GDP and wages in other EU countries that trade with the U.K. could decline too. Because Europe is the largest economy in the world, a slowing there could reduce American exports, causing our economy to suffer too.

Risk posed by a slowing Europe is further magnified because a flight to safety is already causing a strengthening of the U.S. Dollar. Since the U.K. vote, the PowerShares DB U.S. Dollar Index ETF is up 3.48% and as it strengthens against the U.K.'s pound sterling and the EU's Euro, it gets increasingly more expensive for Europeans to buy our goods. If prices on U.S. goods increase too much, then companies comprising the S&P 500 could be hit hardest because many of them are multinationals that get a big chunk of their sales from overseas.

Although there's no magic formula to determine how much of your money should be in stocks, a common rule of thumb is that the percentage invested in stocks shouldn't exceed 100 minus your age. For example, a 70-year-old would limit his or her exposure to the stock market to 30%, while a 30-year-old would invest, at the most, 70% of his or her portfolio in stocks.

While there are other investments that can be considered, most investors should focus the majority of their non-stock portfolio on U.S. bonds.

In the past, global investors seeking safe haven turned to both the EU and the U.S. bond markets. However, with uncertainty growing in the EU, it's not a stretch to assume that most global investors will shift their attention primarily to the United States. That may be happening already.

The iShares 20-Year U.S. Treasury Bond ETF (NASDAQ:TLT) is up 5.25% and the SPDR Intermediate Term Treasury ETF (NYSEMKT:SPTI) is up 1.01% since the Brexit vote. For comparison, 70% of the iShares International Treasury Bond ETF is invested in European bonds and it's lost 0.76% since last Thursday.

Investors with a longer time horizon might benefit more from owning the 20-Year U.S. Treasury Bond ETF than the Intermediate Term Treasury ETF because it offers a higher yield.

Bond prices can and do fluctuate depending on U.S. interest rate policies and therefore, long bonds are more exposed to interest rate headwinds than intermediate term bonds. Fortunately, investors get compensated for taking on that interest rate risk with a higher yield. Currently, 99% of the iShares 20-year U.S. Treasury Bond ETF's holdings are invested in U.S. Treasuries with maturities of 20 years or more. As a result, it's yielding about 2.2%. Meanwhile, the average maturity of U.S. Treasury bonds held in the the Intermediate Term Treasury ETF is only 4.14 years and its yield is 1.74%.

The vast majority of investors should stay the course with their investing. In fact, now may be the perfect time to revisit the amount that gets contributed every month to retirement plans. Increasing contributions now could lower the average cost of investments in portfolios and reward you later. If in reviewing your portfolio you do decide that you've gotten a bit too heavily invested in stocks during the post-Recession rally, the silver lining behind this recent sell-off could be that it reminds you of the importance of diversification.