The price of crude oil had been on quite a run this year, rebounding from the mid-$20s all the way past $50 a barrel before recently slumping on Brexit fears. For a driller like Pioneer Natural Resources (NYSE:PXD) that rebound to $50 was the signal it had been waiting for to start adding back rigs to accelerate its production growth. However, for ConocoPhillips (NYSE:COP) $50 oil is an improvement, but not the price at which it plans to restart its growth engine.

It is not the oil price, but the macro environment

Improving oil prices over the past few months are fueling many investors and analysts to ask at what oil price drillers will start adding back rigs. That was the very first question an analyst asked ConocoPhillips' management team on its last quarterly conference call. However, instead of pointing to a particular oil price as some of his counterparts did, Al Hirshberg, ConocoPhillips' executive vice president of production, drilling, and projects, had this to say:

We don't have any plans to add any rigs beyond the three that we are running in the Lower 48 in 2016. And of course we haven't set our 2017 budget yet so we haven't determined how many we would run there. But overall I would say that there is no set spot price that we are trying to watch as a trigger to start adding back activity. We will be looking at the entire macro environment, looking at supply and demand fundamentals and whether we think that any price action that we get is actually sustainable or not.

In other words, ConocoPhillips is not basing its decision to increase capital spending on increasing cash flows or the returns it can earn at higher oil prices. Instead, it only wants to consider returning to growth mode when the oil market needs incremental supplies.

That is not to say rivals like Pioneer Natural Resources are not concerned about market stability. However, Pioneer Natural Resources made it clear earlier this year that it would likely start adding back rigs once oil recovered to $50 a barrel. It did just that earlier this month by injecting an additional $100 million into its capital expenditures budget, boosting it to $2.1 billion to provide funding to add five rigs to its drilling fleet by the end of the year. Further, the company plans to add even more rigs once it is confident that oil is sustainable above $50 a barrel.

Production growth is one of Pioneer Natural Resources' highest priorities. That is why the company plans to grow its output by 12% this year and accelerate that growth rate to 13%-17% in 2017. Meanwhile, most other producers are either holding production flat, which is what ConocoPhillips is doing, or allowing it to decline.

Instead of growing production, ConocoPhillips has other priorities as market conditions improve. Hirshberg detailed these on the call:

And then as prices do come back, our first priority is going to be to strengthen the balance sheet, reduce our debt. And then even after that, we recognize that adding capital for organic growth is going to have to compete with other things on our list like, for example, per-share growth. So we are not in a hurry to say there is some price trigger where we are going to add back capital.

Topping ConocoPhillips' list is the plan to pay back some of the debt it incurred during the downturn. It has targeted to get its debt back below $25 billion after it had risen to nearly $30 billion as of the end of last quarter: 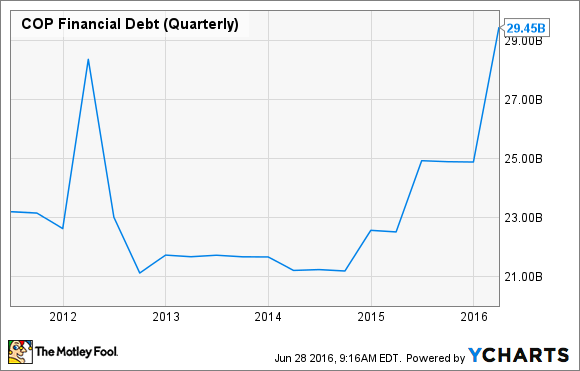 However, even after it trims its debt, the company is not planning to grow for the sake of growth. Instead, it has determined that pushing an absolute production-growth target does not yield the best results for investors, which is why it plans to grow production on a per-share basis going forward. This implies that it will likely use some of the incremental cash flow from higher prices to buy back stock instead of adding back rigs.

While some of its peers are starting to add back rigs when oil is at $50 a barrel, ConocoPhillips has no such plans. Instead, it might not add rigs any time soon if it can achieve better growth for its investors via share buybacks. Given this new take on growth, it could be quite some time before ConocoPhillips restarts its production growth engine.