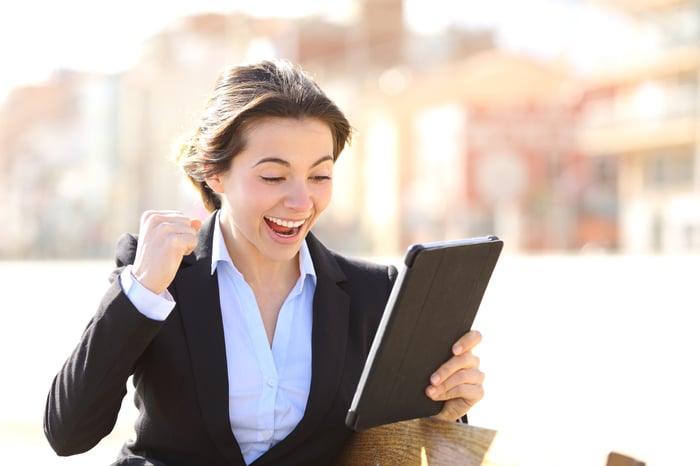 Dividend stocks can be the foundation of a great retirement portfolio. Not only do the payments put money in your pocket, which can help hedge against any dips in the stock market, they're also usually a sign of a financially sound company. Dividends also give investors a painless opportunity to reinvest in a stock, thus compounding gains over time.

We'll begin the week by leading off with a true Dividend Aristocrat, home improvement giant Lowe's (LOW -0.29%). Earlier this year it raised its dividend for the 54th consecutive year. In order to be a part of the exclusive Dividend Aristocrat club, a company has to have increased its payout for a minimum of 25 straight years.

The biggest concern with owning a company like Lowe's is what might happen to its bricks-and-mortars-dependent business as companies like Amazon.com (AMZN -1.65%) infiltrate the retail space. Lowe's is already locked into a major battle with its primary rival Home Depot, but is being forced to fight on two fronts, with the likes of Amazon offering low overhead and a very competitive price point.

The good news for dividend investors is that Lowe's has the potential to thrive in any market environment, and it does have an answer to pesky Amazon.

First, Lowe's business model is set up much like Home Depot's, albeit with a bit more emphasis on appliances than Home Depot. Nonetheless, it's able to take advantage of the changing housing and construction environment by catering to both of its core customer groups. If the economy is booming, Lowe's turns its attention to contractors, who are the heart and soul of its business. If the economy is contracting and enterprise customers are dwindling, consumers who aren't moving but are eager for change via home remodels take precedence. Lowe's has the flexibility to switch up its focus and remain healthfully profitable.

Having delivered 7.5% same-store sales growth in the first quarter of fiscal 2017, Lowe's should already be on your radar. But, paying out $1.40 a year (a 1.8% yield) in dividends with nearly $6 in EPS expected by fiscal 2020 should get you excited that bigger payouts are likely on the way.

Another company income investors would be smart to consider is specialty insurance products provider Assurant (AIZ 0.15%).

Assurant, like other financial stocks, has come under pressure because of historically low lending rates. Insurers tend to invest their received premium payments, known as float, into short-term, safe, interest-based assets. Because lending rates have been so low, Assurant and other insurers have been receiving very little for their billions of invested dollars. In Q1, Assurant wound up racking up only $135.7 million in net investment income.

However, a bet on Assurant is a bet that long-term interest rates will normalize in the intermediate-term. Prior to Brexit and the U.S. May jobs report, it was looking increasingly likely that the Federal Reserve was going to boost interest rates at least once more in 2016. That idea is probably off the table now. But this doesn't change the longer-term view that rates will probably rise as the U.S. economy grows. Even a return to 3% on the federal funds target could boost Assurant's net investment income by close to $300 million per year. That would be good enough for more than $4 in added annual EPS just from net investment income.

Assurant also has what most insurers have: pricing power. As long as insurers run their businesses prudently, they're able to boost premiums when need be to ensure they stay one step ahead of inflation and the U.S. economy. Although catastrophes are wholly unpredictable, Assurant can use the imminent likelihood of catastrophes as justification for increasing premium prices.

I also happen to like Assurant's product mix, especially with its decision to exit Obamacare's marketplace exchanges fully in 2016. Obamacare had been costing Assurant a pretty penny in annual losses. Assurant's niche mobile insurance market and its multi-family housing and mortgage solutions provides investors with both fast-growing and traditional cash flow opportunities.

Currently paying out $2 annually (a 2.3% yield), Assurant is expected to earn north of $7 per share in 2017. Assuming lending rates eventually rise toward their historic norm, Assurant would be in line to potentially double its dividend over the next decade or less.

The biggest concern investors in Worthington Industries would have is that it's a largely cyclical company. In other words, Worthington is going to struggle if growth in the U.S. economy slows. It's dependent on the construction, automotive, and oil & gas markets to fuel its steel processing and pressure cylinders business. We've certainly seen what a slowing economy can do in Worthington's latest quarterly results, in which revenue in its processing segment, by far its largest, dipped 16% on account of lower average selling prices.

But betting on Worthington Industries over the long-term could make a lot of sense given that expansionary cycles tend to be substantially longer than contractions. By this historic trend alone, Worthington should have far more up years than down years.

The more important factor that could persuade investors to take a look at Worthington is that more than 60% of its business is tied to construction and automotive, which are two industries that are poised to benefit with persistently low lending rates. The U.S. auto market is expected to hit a record high in sales next year, and near-record low lending rates are spurring businesses to take on debt and expand. With strength expected in Worthington's core businesses, it's probably not worth getting into too much of a fuss over weakness in oil and gas pressure cylinder demand. Then again, over time I would even expect a rebound here as well given the long-term forecast for increase oil and natural gas demand.

Worthington Industries' current annual payout of $0.76 works out to a 2% yield. However, with strong long-term growth potential, and $2.66 expected in fiscal 2017 EPS, I could also see Worthington's dividend doubling before 2025.

The Motley Fool owns shares of and recommends Amazon.com. It also recommends Home Depot. We Fools may not all hold the same opinions, but we all believe that considering a diverse range of insights makes us better investors. The Motley Fool has a disclosure policy.

This Under-the-Radar Investing Strategy Could Make You Richer