New York Community Bancorp (NYSE:NYCB) seems like an odd stock to short. After all, it's generated one of the best shareholder returns of all banks since going public in the mid-1990s.

Yet, when you look at the KBW Bank Index, which tracks 24 of the nation's biggest bank stocks, it ranks fourth in terms of the percent of its outstanding shares sold short, behind only Cullen/Frost Bankers, People's United Financial, and Huntington Bancshares.

It's easy to understand why Cullen/Frost is under pressure, given that it's a Texas-based bank with exposure to the energy industry. People's United Financial, meanwhile, was recently downgraded by Moody's as a result of the bank's below-average profitability, weak capital position, and commercial real estate concentration. And Huntington Bancshares has likely come within short-sellers' sights given concerns about its energy and auto loan portfolios.

New York Community Bancorp, by contrast, has a long history of prudent and profitable operations. Its business model is so sound, in fact, that it wrote off only 0.2% of its loans at the peak of the financial crisis compared to 2.9% among banks in its peer group. Consequently, even if the U.S. economy were to enter a recession, its shareholders can have confidence that their investment is sound. The reason New York Community Bancorp seems to have caught the eye of short sellers can be traced instead to the implications of its recent acquisition of Astoria Financial (NYSE:AF).

But irrespective of the impact on New York Community Bancorp's bottom line, there's one downside to the deal that the bank can't skirt: it almost necessarily means that it will have to further reduce its quarterly dividend.

New York Community Bancorp's business model has long been predicated on distributing a large portion of its earnings to shareholders via dividends. Over the past five years, for instance, it's paid out upwards of 90% of its net income every year. 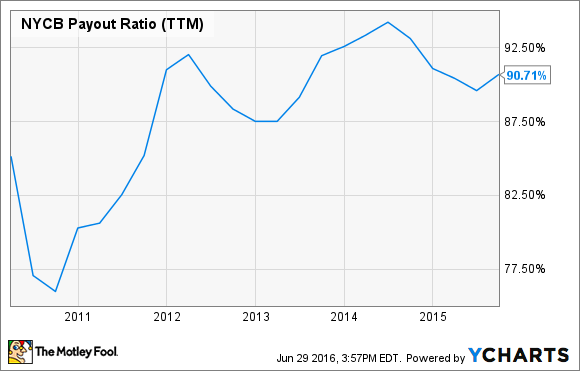 There's no question that this will change given that New York Community Bancorp's post-acquisition assets will exceed $50 billion, subjecting it to the Federal Reserve's annual stress tests and its related caps on payout ratios.

As I discussed recently in relation to Wells Fargo, the Fed has placed a soft cap on dividend payout ratios above 30%, beyond which the central bank closely scrutinizes bank capital plans. This doesn't mean that banks can't pay out more than that, as many do, but it's widely believed that any discretion to do so stops at a 40% payout ratio -- a hard cap.

Taken together, then, it seems like the bank will have to reduce its dividend further to satisfy regulators in the second stage of next year's stress test, the comprehensive capital analysis and review. And if this happens, it's also reasonable to assume that investors who have long held its stock for the above-average yield will likely go elsewhere, which, in turn, would play into the thesis of short-sellers.

This is why, it seems to me, that New York Community Bancorp counts itself among the most-shorted stocks on the KBW Bank Index.