American banks may be a surprising victim of Brexit. In just two trading days, the SPDR S&P Regional Bank Index (NYSEMKT:KRE) has lost about 10% of its value, making it one of the biggest losers in this Brexit-related sell-off.

But you'd have a very hard time finding regional banks that have any substantial exposure to the United Kingdom or the European Union. Constituents in this index include purely American banks like Cullen/Frost Bankers (NYSE:CFR) in the Southwest, SVB Financial Group (NASDAQ:SIVB) in Silicon Valley, and Bank of Hawaii (NYSE:BOH) in the isolated state of Hawaii.

These aren't complicated global trading banks. Regional banks are deposit gatherers and loan makers. That doesn't mean they're spared by global financial calamity, however. When markets panic, their businesses are punished too. 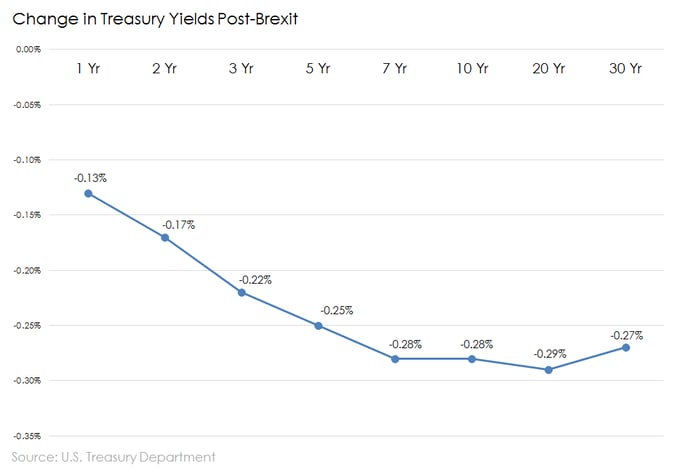 The decline is most-pronounced in 7-, 10-, and 20-year U.S. Treasuries, where yields have dropped nearly 0.30 percentage points from pre-Brexit levels. This may seem insignificant, but it is huge for the banking industry.

Remember, banks make their money by borrowing at the short-end of the yield curve (deposits are priced based on short-term rates) and lending at higher rates on the long-end of the yield curve. As banks cannot convince customers to accept negative interest rates on deposits, a decline in rates comes right out of the bank's pocket.

The banks that have been hardest hit by a post-Brexit smushing of the yield curve generally have a few common traits. First, they have a relatively high amount of securities (U.S. Treasuries, municipal bonds, or mortgage-backed securities) on their balance sheets.

Logically, these banks have the most to gain from rising rates. Should rates rise, yields on securities would follow, allowing these banks to recycle capital into higher-yielding investments.

Likewise, piles of non-interest-bearing deposits would allow these banks to capture the increase in rates as profit, as their deposits would not reprice upward as quickly as other banks' deposits. (To a lesser extent, Cullen/Frost Bankers also moves up and down with oil, given its geographic concentration in oil-rich states.)

SVB Financial Group, Cullen/Frost, and Bank of Hawaii have all have proven to be capable underwriters and stewards of their investors' capital. For now, though, regional banks and industry ETFs are merely a vehicle through which traders are speculating on interest rates, taking investors along for the ride.