I've been eyeing Cisco (NASDAQ:CSCO) for a while, but the stock hadn't significantly pulled back since early May. So when the stock fell about 5% on June 24 after the Brexit vote and dipped another 2% the following Monday, I finally started a position. Here are my four reasons for doing so.

1. Limited exposure to the U.K.

Cisco's European business is included in its EMEA (Europe, Middle East, and Africa) segment, which accounted for a quarter of its sales last quarter. Revenue in that region fell 2% annually last quarter (excluding the sale of its set-top box business), mainly due to declines in Russia and the United Kingdom.

Cisco doesn't break down the segment by individual countries, but CEO Chuck Robbins recently told CNBC's Jim Cramer that U.K. sales only account for about 5% of Cisco's top line. Granted, sales across Europe could eventually be affected by the Brexit fallout and currency declines, but the immediate impact of the U.K.'s exit on Cisco should be limited.

Meanwhile, growth in the APJC (Asia Pacific, Japan, and China) region should offset any softness in EMEA. Revenue at the segment rose 10% last quarter, thanks to robust demand in China, and accounted for 16% of Cisco's top line.

Cisco's revenue growth initially looks weak, with analysts expecting flat sales growth for the full year. Sales of routers and switches, which account for nearly half its revenue, fell 3% and 5% annually last quarter respectively. There are ongoing concerns that cheaper hardware from China and cloud-based networking solutions could reduce demand for both types of devices.

However, Cisco has been gradually shifting its business toward higher-margin collaboration, service provider video, and cybersecurity services. Those three businesses all posted double-digit sales growth last quarter and accounted for 17% of the company's total revenue. Cisco is expanding these businesses with acquisitions, and using them to widen its competitive moat by bundling them with its networking hardware.

That strategy enables Cisco to leverage its dominance in networking hardware to expand into higher growth markets. Stronger demand for those higher-margin services, along with buybacks, are expected to boost Cisco's EPS by over 5% this year.

Shares of Cisco have rebounded since my initial purchase, but the stock still trades at just 14 times earnings. That's slightly higher than its smaller rival Juniper Networks' (NYSE:JNPR) P/E of 13, but it's still much lower than the industry average of 20 for networking device companies. Looking ahead, analysts expect Cisco's earnings to grow 10% annually over the next five years. That gives it a 5-year PEG ratio of 1.1, which hovers just above the "undervalued" threshold of 1.

Cisco currently pays a forward annual dividend yield of 3.8%, which is higher than Juniper's 1.8% yield and should prevent the stock from falling much further. Cisco has hiked that dividend every year since it was introduced in 2011, but Juniper has never raised its payout. Over the past 12 months, Cisco paid out 36% of its free cash flow as dividends, indicating that it has plenty of room to boost its payout.

Cisco spent $2.95 billion, or 23% of its FCF, on buybacks over the past 12 months. Since Cisco can easily cover its dividends and buybacks with its FCF instead of debt, rising interest rates won't impact its ability to return capital to shareholders.

4. Lots of cash for acquisitions

This highlights one of Cisco's greatest strengths -- its ability to generate free cash flow. Over the past five years, Cisco's trailing 12-month free cash flow growth ($12.7 billion as of last quarter) has consistently outpaced its lackluster revenue growth. 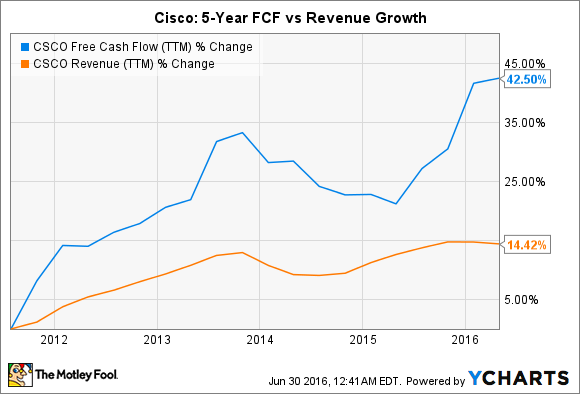 Since Cisco has plenty of FCF left over after paying dividends and buying back stock, it can pursue an inorganic growth strategy and acquire companies to strengthen its higher-growth services. Cisco has already closed or announced five acquisitions since the beginning of calendar 2016, with most of them specializing in cloud or IoT technologies. Over the long run, these acquisitions could help it strengthen its bundles and pivot away from its core business of switches and routers.

Cisco isn't a sexy high-growth tech stock, but it has low valuations, a good dividend, solid cash flows, and a wide competitive moat. Its low exposure to the United Kingdom means that the Brexit sell-off was unwarranted, so I'll be looking forward to more panic-induced dips to add more shares.