Since bottoming out in November 2008, and after adjusting for its stock split, Alphabet (NASDAQ:GOOG) (NASDAQ:GOOGL) has had a stock price history that's the envy of the market. Better known as "Google," this company has seen its stock rise relatively uninterrupted for almost seven years. 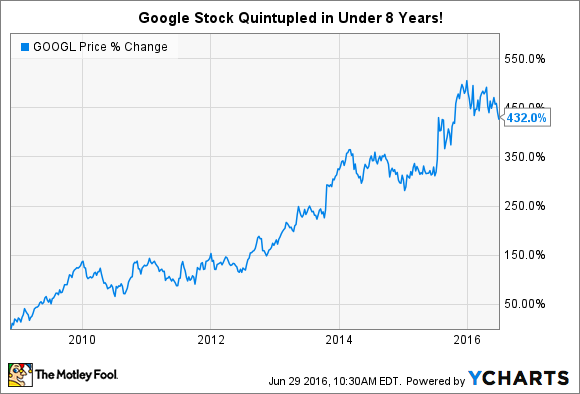 Over the past few months, however, the stock has hit a wall, falling 13%. Does that mean that we're seeing a buying opportunity? Let's explore the question from two dimensions.

Using Google's stock history, what would happen if you bought on the dips?

The past is in no way a perfect predictor of future performance. But to help us gauge what kind of opportunity Google stock is presenting, I went back to find out what would have happened if an investor bought Google shares whenever the company's stock fell at least 13% from its 52-week high.

If it fell more than 13%, I logged a purchase for every multiple of 13 that it fell. For instance, I would buy it after losing 13% from its high, and again if it had lost 26% from its high...and so on. Here's what I found:

As you can see, this method has been pretty effective at generating superior returns. The most important figure is the one in the lower right-hand corner: buying shares of Google stock after such dips has generated -- on average -- returns of 18% per year!

But does that mean Google stock will repeat this history?

As I've already said, such performance is in no way an indicator of what will happen in the future. That being said, however, I have immense confidence in Google's ability to continue generating gobs of free cash flow and steadily improving its earnings. I say this for two reasons.

First, there is a massive, undeniable shift toward mobile advertising worldwide. Research company eMarketer predicts that global mobile ad spending will increase from $69 billion last year to almost $200 billion by 2019. That's enormous growth, and Google and Facebook are the only two companies with enough data on users to offer ads that can be uber-effective at hitting the target audience.

Second, Google has innovation in its DNA. That's why it changed its name to Alphabet last year -- to focus on the fact that the company is making lots of "bets" outside of search. The laboratory that's pursuing these bets is called X, and it is headed up by Google co-founder Sergey Brin.

X is focused on finding technological solutions to some of mankind's biggest problems. Already there are stand-alone projects born out of X, including self-driving cars, Google Glass, and Calico, an anti-aging initiative.

Success in any one of these projects is relatively unlikely. But all it would take is one project to become a success for Alphabet to experience a marked improvement in its top and bottom lines.

In essence, by buying Alphabet shares, you get two businesses: the king of mobile advertising in Google, and a host of moonshots that could change the world. After the stock's recent fall, it is trading for just 20 times expected earnings over the next 12 months. I think that's a pretty good deal.