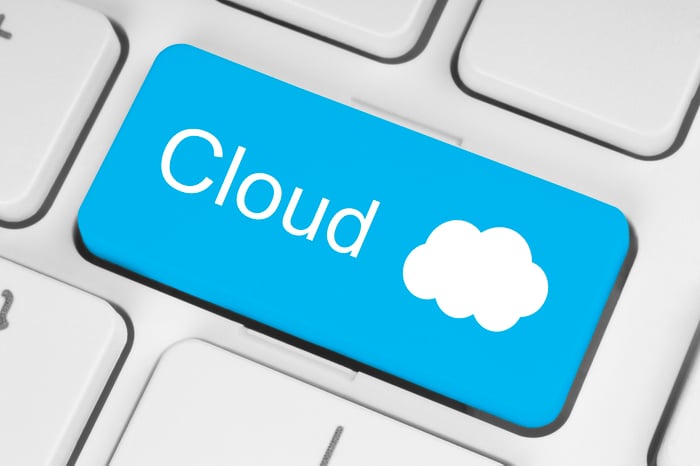 Essentially, every major technology company is actively transitioning to the cloud. Amazon (NASDAQ:AMZN) has become the overwhelming leader in the infrastructure-as-a-service (IaaS) market, where computing resources are sold by the hour, leaving Microsoft and Alphabet's Google playing catch-up.

Software companies are shifting to subscription software-as-a-service models -- in many cases, running the back ends of their applications in the cloud. Every company that consumes IT in one form or another is considering if, when, and how they should embrace cloud computing.

Amazon's cloud strategy revolves around being the biggest and the cheapest provider of cloud infrastructure. Microsoft has previously vowed to match Amazon's price cuts, and Google generally tries to keep pace, as well.

IBM's strategy is more complicated. The company doesn't attempt to compete on price – that's a battle that's unlikely to yield an exceptional return on investment. Instead, IBM aims to do what it's always done: provide valuable solutions to its clients.

Brand agnosticism is still the key

Back in the early 1990s, when IBM was saved by drastic changes made by outsider CEO Lou Gerstner, one of the key decisions that drove the company's resurgence was the push for its services business to be brand-agnostic. In cases where IBM hardware or software wasn't the best option for a client, the services division was free to sell products from other companies. Had IBM attempted to exclusively push its own products, clients would have almost certainly been pushed away.

IBM's aggressive push into cloud computing puts the company in a similar situation. For many companies, low-cost IaaS providers like Amazon Web Services may be a better fit than IBM's SoftLayer. Or a third-party database-as-a-service provider may make more sense than IBM's in-house solutions. In those cases, IBM would lose business if it failed to offer the best solution for a client.

IBM's acquisition of Gravitant late last year offered a good demonstration of IBM's cloud strategy. Gravitant is a cloud brokerage and management platform, allowing customers to compare various cloud providers based on cost and performance, and then manage their cloud infrastructure, potentially across different providers, or in a hybrid configuration, from a central location.

IBM offers a few examples of this price comparison for prospective clients, and in some cases, Amazon Web Services offers the lowest price. Of course, IBM would prefer clients to choose SoftLayer, but its services business only truly works if it's able to put together the best solution possible.

IBM is not attempting to build a one-size-fits-all cloud-computing platform. The company's cloud business is big, with an annual revenue run rate of $10.8 billion; but its infrastructure-as-a-service revenue is minuscule compared to Amazon's. IBM likely will never be the largest provider of cloud infrastructure, but it doesn't have to be in order to build a successful cloud business.

Regardless of the cloud provider an organization chooses, moving to the cloud, and managing cloud infrastructure is not a trivial task. The rise of cloud computing has certainly caused upheaval at IBM, but its services business is adapting. The same brand-agnostic strategy that turned the company around in the 1990s is alive and well today, helping to drive IBM's cloud transformation forward.