Here's what you should know about the innovative electric shuttle named "Olli."

Olli was unveiled and demonstrated during the June 16 grand opening of Local Motors' facility in National Harbor, MD, a resort destination just sound of Washington, D.C. The EV, which can carry up to 12 people, is equipped with advanced vehicle technology, including IBM Watson Internet of Things (IoT) for Automotive, to improve the passenger experience and allow natural interaction with the vehicle.

Olli has been cruising public roads in D.C. at select times since its unveiling. Local Motors, which is currently producing additional Ollis at its headquarters near Phoenix, aims to have 30 vehicles on the streets of the nation's capital by Christmas, according to CEO and co-founder Jay Rogers, Jr. Public road testing of driverless autos is legal in D.C. and in eight U.S. states: California, Michigan, Florida, Nevada, Arizona, North Dakota, Tennessee, and Utah.

While Olli was only recently officially introduced, cities all over the world have expressed interest in putting the smart self-driving EV to use on their public roads. Local Motors sold 10 vehicles during the grand opening. By the end of the year, there will also be Ollis in Miami, Florida; Copenhagen, Denmark; and Las Vegas, Nevada, among other unnamed cities.

Olli went from concept to completion in three months, illustrating Local Motors' production speed advantage over traditional automakers. The privately held company envisions having hundreds of microfactories all over the world where it can quickly produce crowd-sourced vehicles of various types.

In addition to Big Blue -- whose involvement is explored in more depth below -- Local Motors' partners for Olli include the following privately held companies:

Olli's self-driving tech is comprised of three types of sensors: lidar, optical cameras, and GPS. By comparison, Alphabet's (NASDAQ:GOOG) (NASDAQ:GOOGL) Google self-driving tech uses these sensors plus ultrasonic sonar and radar, while Tesla Motors' Autopilot uses cameras, radar, sonar, and GPS, but not lidar. Lidar -- a laser-based tech -- is currently prohibitively expensive for use in mass-market passenger vehicles. This is one reason that many believe Alphabet will likely operate -- or sell to others -- a fleet of Uber-like on-demand self-driving vehicles, rather than license its proprietary tech to automakers.

Many of Olli's components are 3D-printed by the company's Big Area Additive Manufacturing (BAAM) machine, made by privately held Cincinnati Inc.

Some additional specs about Olli:

Olli is the first self-driving vehicle to integrate the IBM Watson IoT for Automotive platform, which uses the cloud-based cognitive computing capability of Watson, best known for beating the top Jeopardy champs in 2011. The platform was launched in December.

Watson is often described as artificial intelligence tech, but it goes beyond AI to machine learning, which "teaches" a machine to learn, based on huge volumes of collected data. With Olli, Watson will analyze and learn from gads of transportation data, produced by more than 30 sensors embedded throughout the vehicle.

In addition to the Internet of Things applications that will enable Olli to learn about road conditions and the like, the brainy EV will be able to learn about -- and from -- passengers who interact with it. This feature is similar to the voice-activated AI assistants of Apple (Siri), Alphabet (Google Assistant), and Amazon (Alexa), which are incorporated into various devices -- such as Amazon's Echo and Google Home -- but taken to a higher level. These big tech players, however, have been upping their involvement in machine learning, so their assistants' IQs should continue to increase.

The IBM Watson IoT for Automotive platform incorporated into Olli leverages four Watson developer APIs -- including speech-to-text and text-to-speech -- to enable interactions between the vehicle and passengers. Some examples of how passengers can interact with Olli: 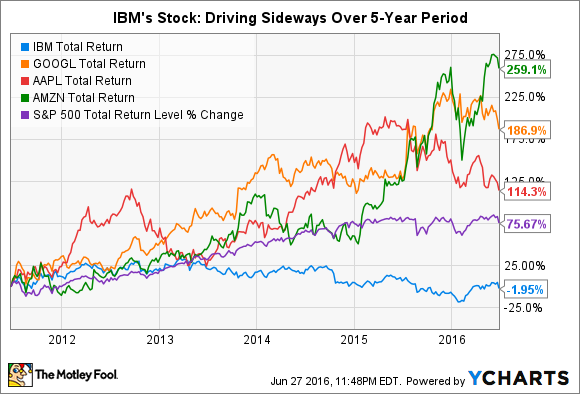 Big Blue's financial performance -- and thus, its stock price -- has fallen behind the leading tech pack of Amazon, Alphabet, Apple, and others in recent years. Revenue has declined for 16 consecutive quarters on a year-over-year basis, which has negatively affected earnings. The vast majority of the declines, however, stem from the company's divesting legacy businesses that it's exiting, as it transitions to areas such as cloud computing and data analytics, and foreign exchange currency headwinds in 2014 and 2015.

IBM is betting big that Watson will help turn things around for it. The Watson IoT platform, launched in December, is targeting the automotive, home, building, retail, and electronics industries. Watson appears to have amazing potential, though it remains to be seen how well Big Blue executes.