We are now halfway through 2016, which has been a tough year for ConocoPhillips (NYSE:COP). While the company has battled back from a brutal start to the year, its stock price is still down for the year: 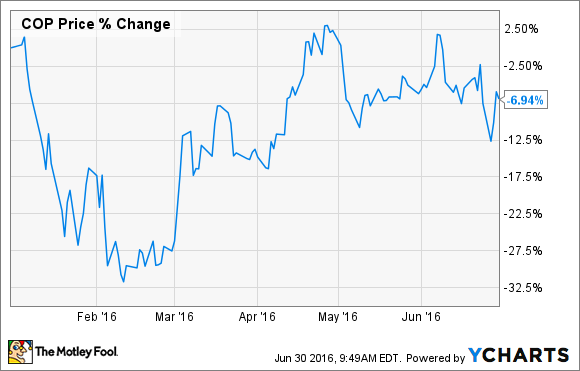 However, while the first half was pretty rough, the company has made progress on several fronts. That has it set up to have a much better second half as long as oil prices cooperate.

Collapsing crude oil prices to start the year weighed heavily on ConocoPhillips. With oil only averaging $34 a barrel during the first quarter, ConocoPhillips had to make some tough decisions to put the company in a better position to withstand weak prices. These moves included slashing the dividend by 66% as well as cutting CapEx to the point where it could no longer grow production.

The decision to significantly reduce the payout did not sit well with shareholders after the company spent all of 2015 saying the payout was "safe" and the "top priority." However, the move did lower the company's cash flow break-even point and increased its flexibility going forward.

In addition to the tough-to-swallow dividend news, investors had to deal with a barrage of bad news involving the company's operations. For example, one of its key growth projects in Canada, the Surmont oil sands facility, had to be shut down for over a month because of the wildfires in Canada. Meanwhile, one of its pipelines in Canada sprung a leak, causing at least 2,400 barrels of oil to spill, and its Melmar exploration well in the Gulf of Mexico turned out to be nothing but a dry hole. On top of all this, the company once again topped the list as the worst methane emitter in the oil and gas sector.

That said, the first half was not all bad news for the company. ConocoPhillips started the year off by exporting the first cargo from its Australia Pacific LNG project, which had been under construction since 2011. Through the first quarter, it had loaded 11 cargos from the first train of that facility and remains on pace to load the first cargo from the second train by the end of the year. Meanwhile, it made progress ramping production at two of its drilling projects in Alaska. Further, it continues to progress toward the first production of the next two expansion phases at its Canadian oil sands joint venture with Cenovus Energy (NYSE:CVE) as well as its Alder project in Europe. Thanks in part to the progress on its major projects, ConocoPhillips' production averaged 1.578 million barrels of oil equivalent per day (BOE/d) during the first quarter, which was at the top end of its guidance range of 1.54 to 1.58 million BOE/d.

In addition to that, costs are falling. The company's operating expenses during the first quarter were down by 20% year over year. One of the highlights was the company's Foster Creek oil sands facility. According to joint venture partner Cenovus Energy, Foster Creek's operating costs last quarter were 17% lower than the year-ago quarter. One of the drivers was a much stronger steam-to-oil ratio, which averaged 3.0 times during the quarter. The ratio is up from 2.4 times last year, and well ahead of the 1.9 times of Christina Lake, which is the other asset ConocoPhillips and Cenovus Energy operate together in the region.

Finally, ConocoPhillips was able to pull additional money out of its CapEx budget without impacting production due in part to its ability to capture cost deflation. This reduction pushes its cash flow break-even point even lower and bolsters its financial flexibility going forward.

There is no doubt ConocoPhillips got off to a rough start in 2016. However, the company is making a lot of progress to finish up most of its major projects, which will give it tremendous flexibility going forward. Further, with oil prices improving, the company is set up to potentially generate a substantial amount of free cash flow over the next six months.